Home to where the art is. Review: School of Fine Art 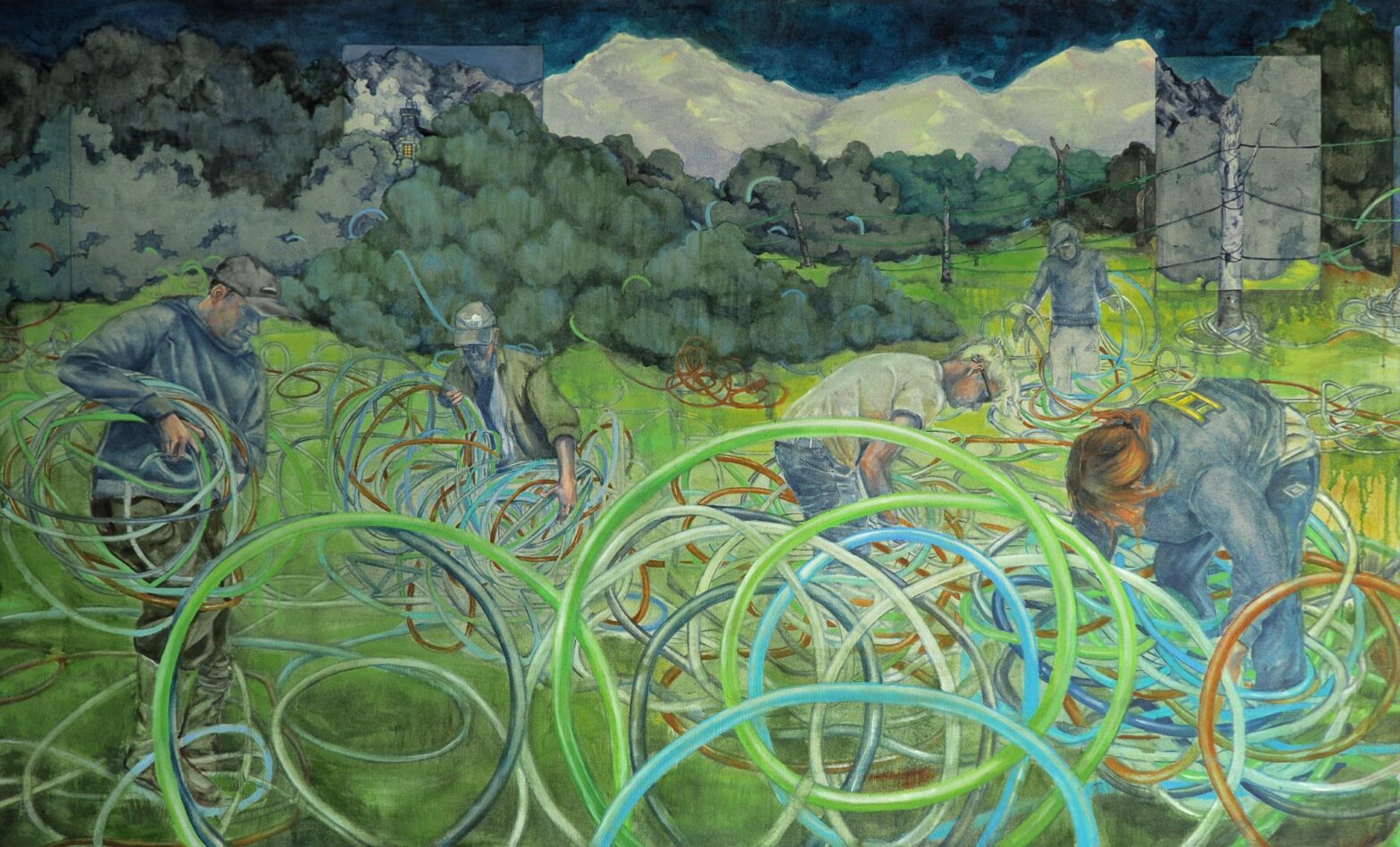 If, like me, you have reached the stage in 2020 when you are sated with the digital world, the prospect of diving headlong into an online showcase is a daunting one. Especially, when it funnels the thoughts, hopes, fears and frustrations of hundreds of artists who were half-way through their year-long Masters programmes at The Glasgow School of Art when lockdown began.

In the UK, at the time of writing this review in late August 2020, we are five months on from the defining moment of the year (if not the century), when we were all told to go home, stay home and save lives. “Anyone can get it. Anyone can spread it” said official government messaging. This proved to be true when Prime Minister, Boris Johnson, was admitted to intensive care in early April, having contracted coronavirus.

As the intensity of lockdown eases, it’s an interesting stage at which to gauge how artists have responded to the challenges of Covid-19. In looking closely at the work of students on three of the 21 Masters courses; MLitt in Fine Art Practice; MLitt in Curatorial Practice and MLitt in Art Writing, we are offered the opportunity to look outside our own “bubbles”.

Penny Anderson, who presents her own work on the MLitt in Fine Art Practice, also appears in a short film on the Curatorial Practice section. Healing in a Broken World is presented as part of Joseph Henry’s submission. Penny has Multiple Sclerosis and last year was forced to declare herself homeless after her landlady announced she was selling the Glasgow flat in which she lived and loved. In this meditative 25-minute-long piece, filmed by videographer Stewart Campbell, Penny is asked what the word “home” means to her and if she feels at home with who she is. “You have no choice in the matter,” she declares. Later, Barrie-James O’Neill, who composed, arranged and performed the haunting score, describes healing as “something that all of us should experience in life.”

This film, with its considered merging of lockdown stills and moving images together with an omniscient narrator and two one-to-one interviews, is a gem and I urge everyone to seek it out.

In the Art Writing section of the showcase, a closeup image of a tiny bat in front of a microphone is used on the pages of three of the four students on the programme. The words underneath state: “I have had a very long day… I am very small and I have no money so you can imagine the stress I am under”.

Jessica Higgins, Maria Howard and Timothea Armour have submitted a collaborative piece of writerly rage aimed at the art education machine or, as they put it, “structures that make things not fun anymore”. Part-poem, part-essay, it responds to a text called The University: Last Words by American academics, Fred Moten and Stefano Harney. It reflects on their own experiences of “the institution”. They all preface the piece by professing “solidarity with those embroiled in complaints against GSA”.

My reaction to this piece of writing? Frustration mainly; especially when I got to the line which declared, “The institution are uncomfortable”. Before Art Writing there was the art of writing. If you are angry with the institution, remember it is a singular entity.

With no venues open to test their theories, students on the MLitt in Curatorial Practice progamme have explored ways to curate work and support artists. Certain themes float to the surface, such as isolation, black identity and queer lives.

Kat Zavada’s approach is straightforward. “I do not believe in a one-size-fits-all model,” the Polish curator says. “Instead, I approach projects by learning the process and needs of my collaborators.” This collegiate approach is much in evidence. Like most of her fellow students on the course, her studies will be ongoing. Kat’s Crypto H(e)aven project with artist, Letta Shtohryn, explores the “data beings” phenomenon following the mysterious death of cryptocurrency founder Gerald Cotten. It will have a digital and physical form, with the launch of the digital version being scheduled for December 2020.

Carol Dunn, whose first degree was in Jewellery Design and Silversmithing, has launched a fascinating website called Now You See Us, which aims to educate the wider public on the historical facts of Afro-Caribbean textured hair while introducing them to new artists inspired by, and using this texture of hair as a muse.

Moving on, there is a “back to nature” thread weaving its way through the work of the 39 graduating students emerging from the Master of Letters (MLitt) in Fine Art Practice programme.

Take Claire Kidd. She had not long returned from a trip to Pakistan when lockdown hit and she headed for the hills. In her case, to a friend’s seawater farm in Glen Shiel in the North West Highlands. The sense of “discombobulation” she felt informed the drawings and paintings she went on to create. One of Claire’s paintings, Times of Entanglement, presents figures in a Highland landscape hard at work trying to untangle a complex web of hose pipes. It could be a metaphor for all our lives.

Vivian Ross-Smith retreated to her home on Shetland and began to made work inspired by her surroundings. Shetland is renowned across the globe for its textiles and Vivian created a series of “wearable paintings” which she then knitted into a performance video piece called BROADCAST. In July, she travelled to various sites which are part of the Shetland Webcam network and in an inspired Dada-ist intervention, she’d appear in all weathers wearing her outsize paintings.

Alexander Anderson went home to the USA to take refuge in his late mother’s childhood home in Phoenix, Arizona. There, he engaged with the landscape of the Sonora Desert and frequented an art sanctuary, The Land With No Name, located in the high desert grasslands of occupied Tohono O’odham ancestral lands. The photographs of his assemblages; kinetic sculptures made from found objects, remind us we are all but blips in infinity.

Every day In lockdown, Gabriela Lesniewska uploaded a video showing a five-hour-long time-lapse of plants growing inside a creamy wax sculpture. It’s mesmerising. Gabriela’s website is an excellent platform from which to view her work. The oddly beautiful and highly textured photographs of dead birds in her Birds of Paradise series burn their way into the synapses and remind you of the fragility in all things.

The postgraduate digital platform uses the same format as the GSA Graduate Showcase, which launched in June. While it’s a functional enough setting, it can be overwhelming and I urge anyone surfing around the site to take a detour into the students’ own social media and websites (linked through each student’s showcase).

Clean lines and vivid patches of colour are the hallmark of James Pfaff, who works across various mediums, including photography, painting and sculpture. Clearly influenced by Japanese culture, there is a mature and confident hand at work in each and every one of his submissions.

Alanna Blake‘s take on early Renaissance painting mashed up with her personal memories leaped off the screen and I found myself longing to see her big figurative paintings in an actual room, especially CARRY OUT, FIRST BUS, which is both poignant and en-pointe.

Georgie Mac‘s cosmic drawing came alive in his Instagram @hellogeorgiemac, especially the one posted on August 15 with the pertinent description “Casual levitation”. He is a featured artist at the top of the Fine Art Practice showcase page with his excellent Charcoal Claw video. Strapping on bird-like claws, he creates an ink drawing augmented by terrific scratchy sound.

Chenchen Yang‘s fascination with Britain’s class system led her to create delicately beautiful and intricate collages based around costume. The sting is that each figure has a wasp for a face.

Penny Anderson has been drawn to shiny things in her new collection, Enargeia Arcade. Using ready-mades, dolls house furniture, self-assembly kits, collage and mirrors which can be manipulated like a tiny fun fair, Penny has created the possessions of a fictional character by the name of Enargeia Crow. His playthings, she tells us, have been bought on the back of him having “made billions from his international warehouses, shipping, storage and a fleet of delivery drivers and cyclists”. They have now been “seized in lieu of outstanding taxes by HMRC”. It’s a clever take on the excesses of contemporary global capitalism.

Creatives are always quick to sense the ways in which the wind of change is blowing and adapt accordingly. The majority of students in this cohort have risen to the Covid-19 challenge and made the best of a bad job. Nothing compares to the real thing, but as Tom Graystone points out, his key aim was “how to break down the boundary of the screen in a time where we are, more or less, restricted by it.” In creating a 3D reproduction of his tenement flat for his body of work, he brings it all home – to where the art is.

*Jan Patience is one of Scotland’s most well-known and respected arts journalists. As well as writing a regular visual arts column for The Herald, for the last decade, she has been a regular arts expert on television and radio programmes. Listeners to and viewers of BBC Radio Four’s ‘Front Row,’ BBC Radio Scotland, the new BBC Scotland channel and Scottish TV.