When the water come （The isolated island by Yining Fang）

This animation is a spin-off from the research project 'The Isolated Island' The Glasgow School of Art - MDes in Interior Design - Stage 3 Created by Yining Fang Music: Space Oddity by David Bowie

Yining Fang is an interior designer who has 2 years of retail design experience (Tesla, Gap, Nike) and now doing a master degree in Interior Design at GSA School of Design. She cares about the natural ecological environment, has high sensitivity and response-ability to the environmental issue. She is good at expressing the concept of works through various media. In terms of skills, she is proficient in various drawing skills and has a certain extent graphic design ability.

This Research Project will be mainly focusing on the topic of the changing marine environment: How the living spaces of the marginal people in the super coastal cities will change step by step, and take the palimpsest as the carrier, to record this possible “history”, which is 80 years long. This research project will focus on the period from 2020 to 2100 when the sea level will gradually rise by 8m. When this climate crisis becomes more severe and affects the Shikumen community’s life, these changes are what this project most interested in: how are they preserved in the form of memory? Shanghai Shikumen is interesting as the product of the times and it has sufficient content to be explored.

This project first used the resident interview. The interview brings an overall comprehension about the living environment in the Shikumen community, most people lived here for generations, and their differences in the acceptability of technology or other new things are striking. Some participants were nostalgic, while others are determined to abandon the obsolete products and follow the trends. It can also extend to their attitude and storage approach towards past memories. Apart from that, when they were asked about the repair history, almost everyone mentioned the government /housing management departments seek only superficial harmony but avoid inner chaos.

The second methodology is the theory study about archaeology and palimpsest. Susanna Bortolotto mentioned that archaeological reading is a valuable tool, which can not only re-evaluate existing hypotheses but also provide a clear direction for further investigation in order to propose a more optimized scheme for preservation and renovation of modern ruins；And emphasize the complexity of iteration during the building development, which can be linked to the notion of palimpsest. Ancient people used a unique approach to erase words written on parchment to provide space for new text, so they keep covering the new layer on the existing one. After a thousand years, old layers have emerged rapidly, then formed palimpsest. Besides, this term is also used in the architecture field. People continually alter the structure of the original building for various incentives, and these changes would be recorded as the structure changes. In design practice, the notion of palimpsest could be reflected in both outcome and methodology.

Design Process
This project proposed a fictional Shikumen house. Based on Isozaki’s theory in his book “unbuilt”, this project assumed 4 phases, present (2020); City in the air (2050); Computer-aided city (2080); Fictional & mirage city (2100), and imagine the possible changes in each period.

Outcome
A 10mins long animation has been produced. The story is in 2130, for the new documentary “When the Water Come”, Noah, the compere, come to Shanghai to interview Lee4, the last guardian of Shikumen community, and tried to explore some memories which would soon disappear.

Significance
The significance of this project is to present a new possible scenario from a more realistic perspective, show the possibility of memory being spatially recorded as a palimpsest, emphasize the importance of preserving the existing building. Meanwhile, its experiment with the potential of section drawing. 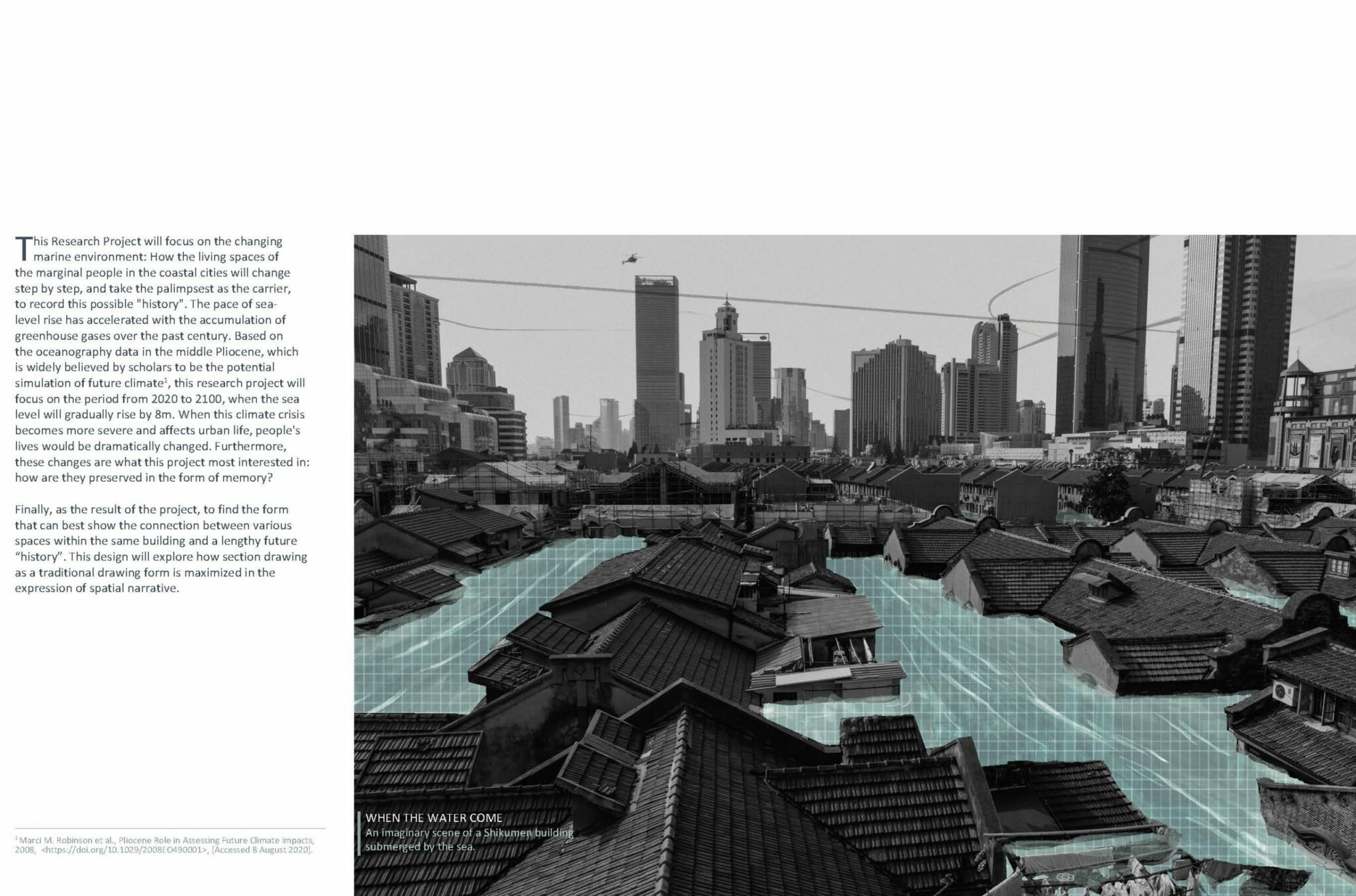 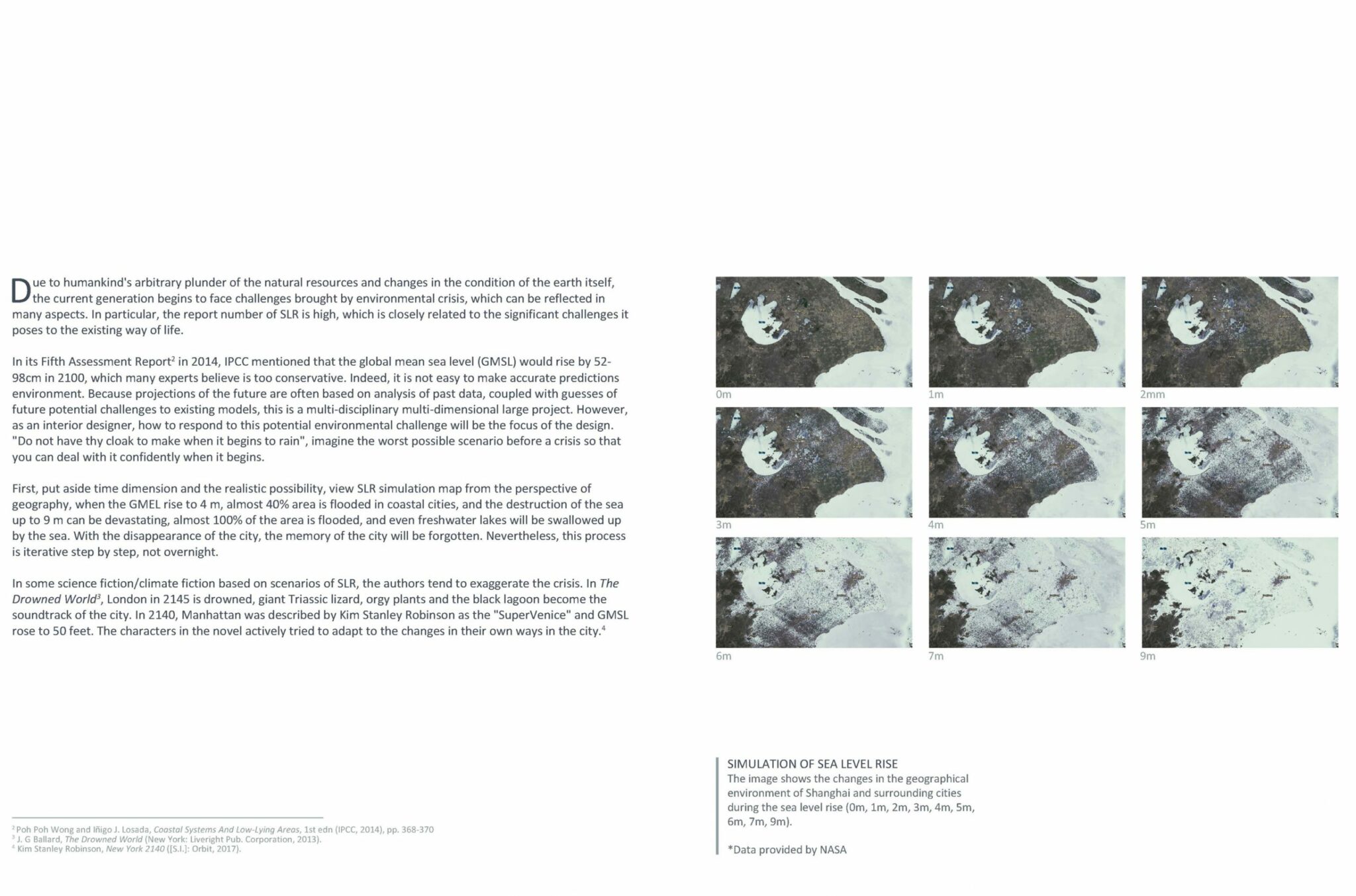 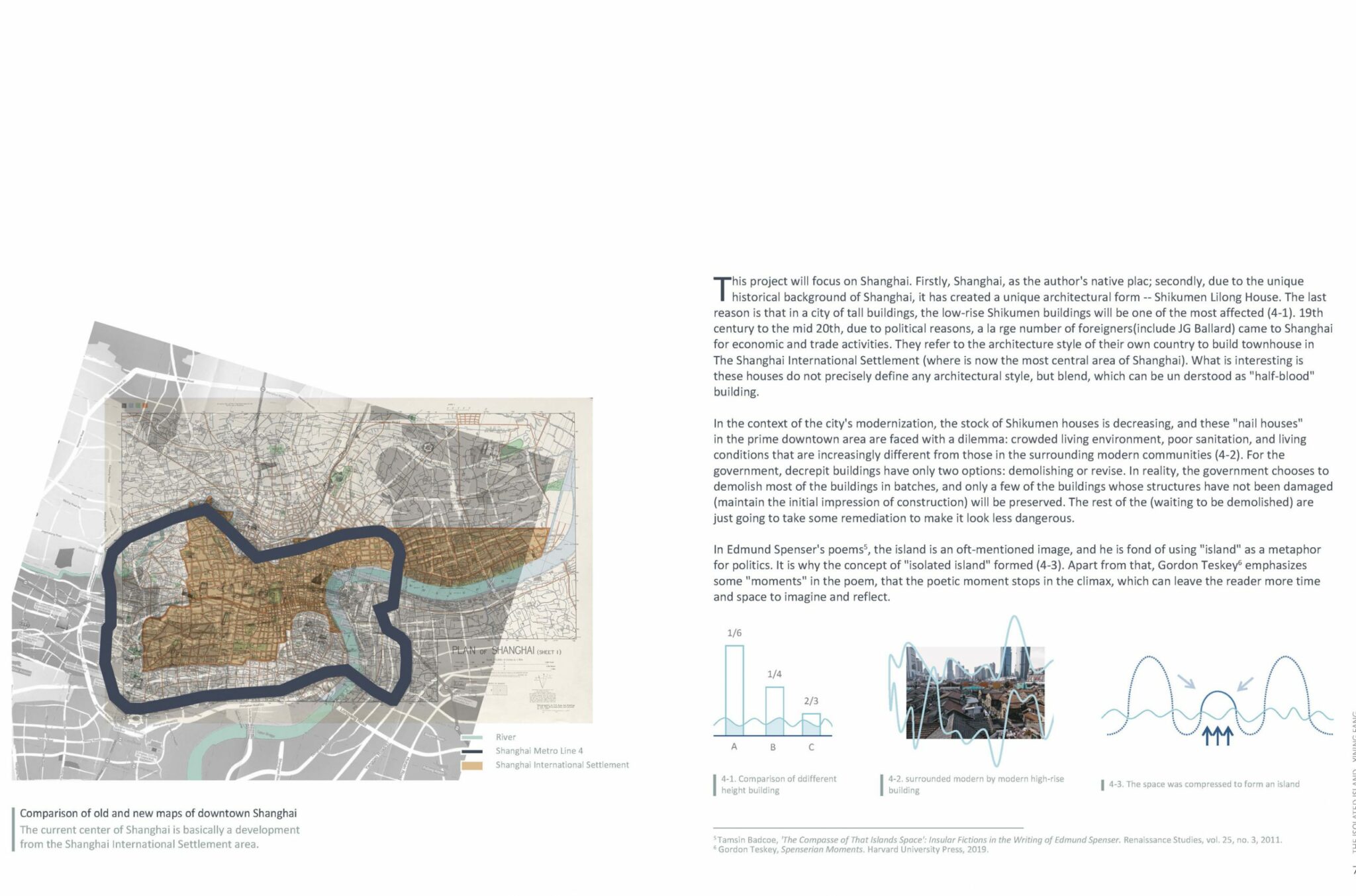 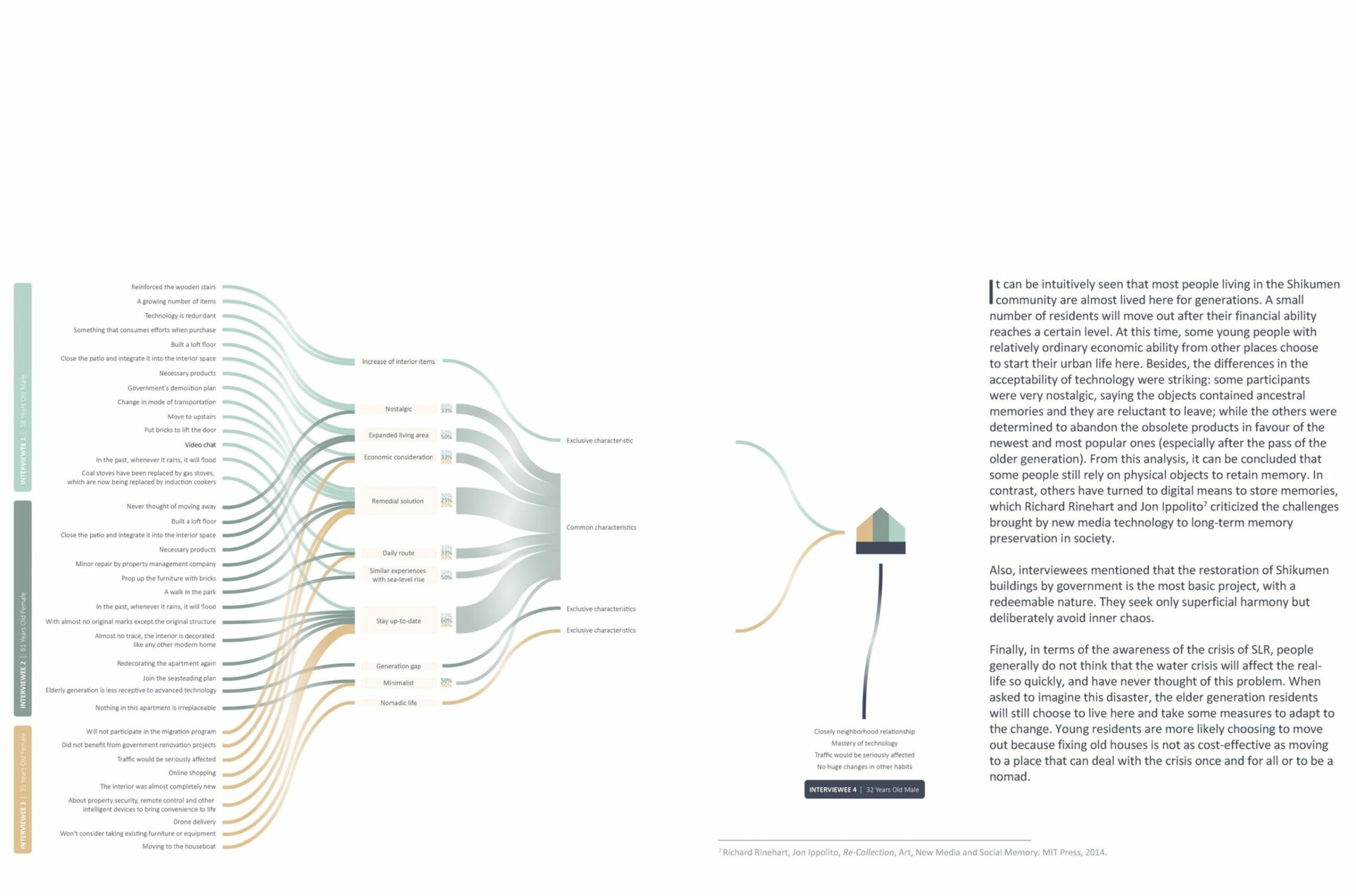 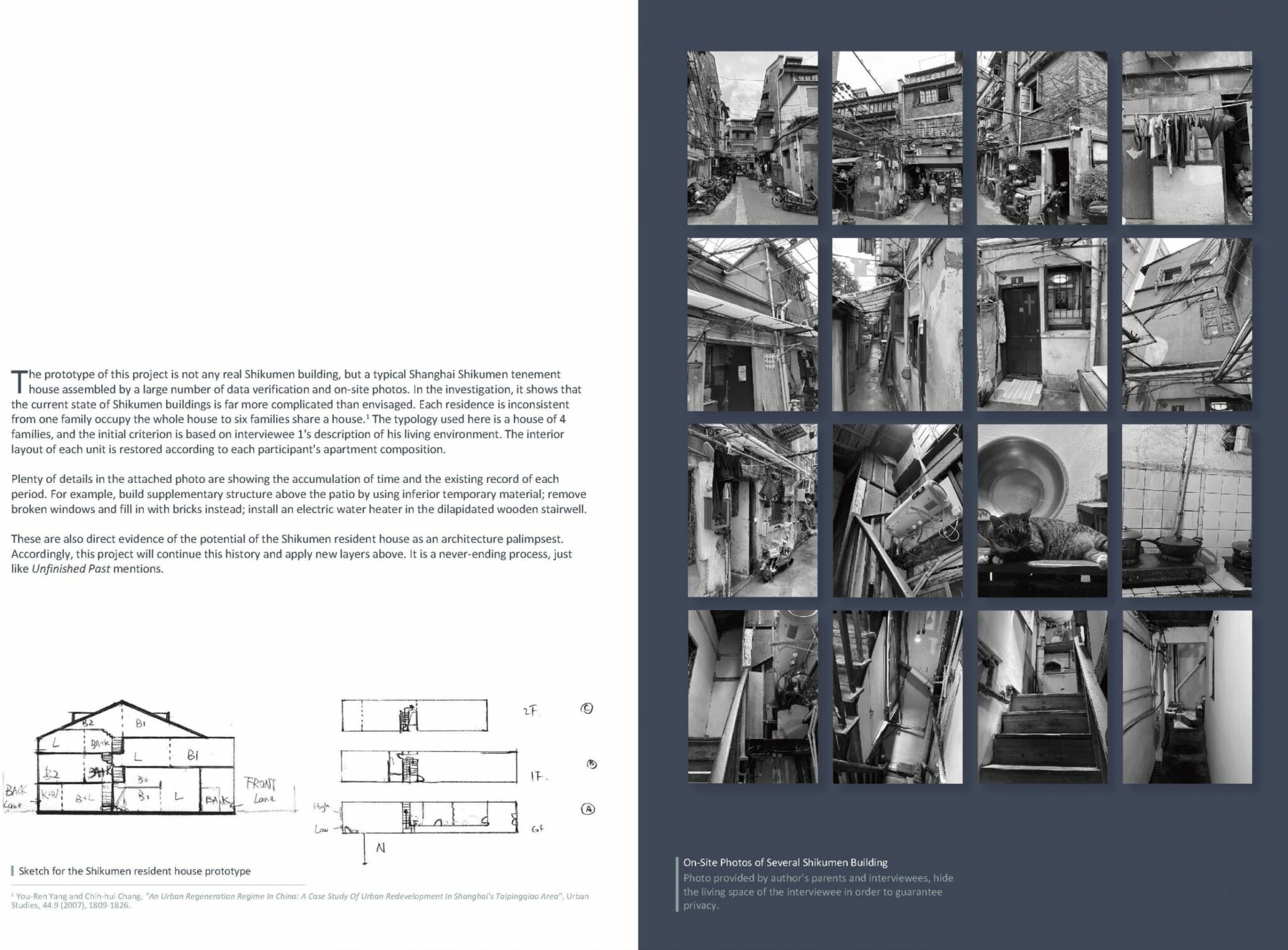 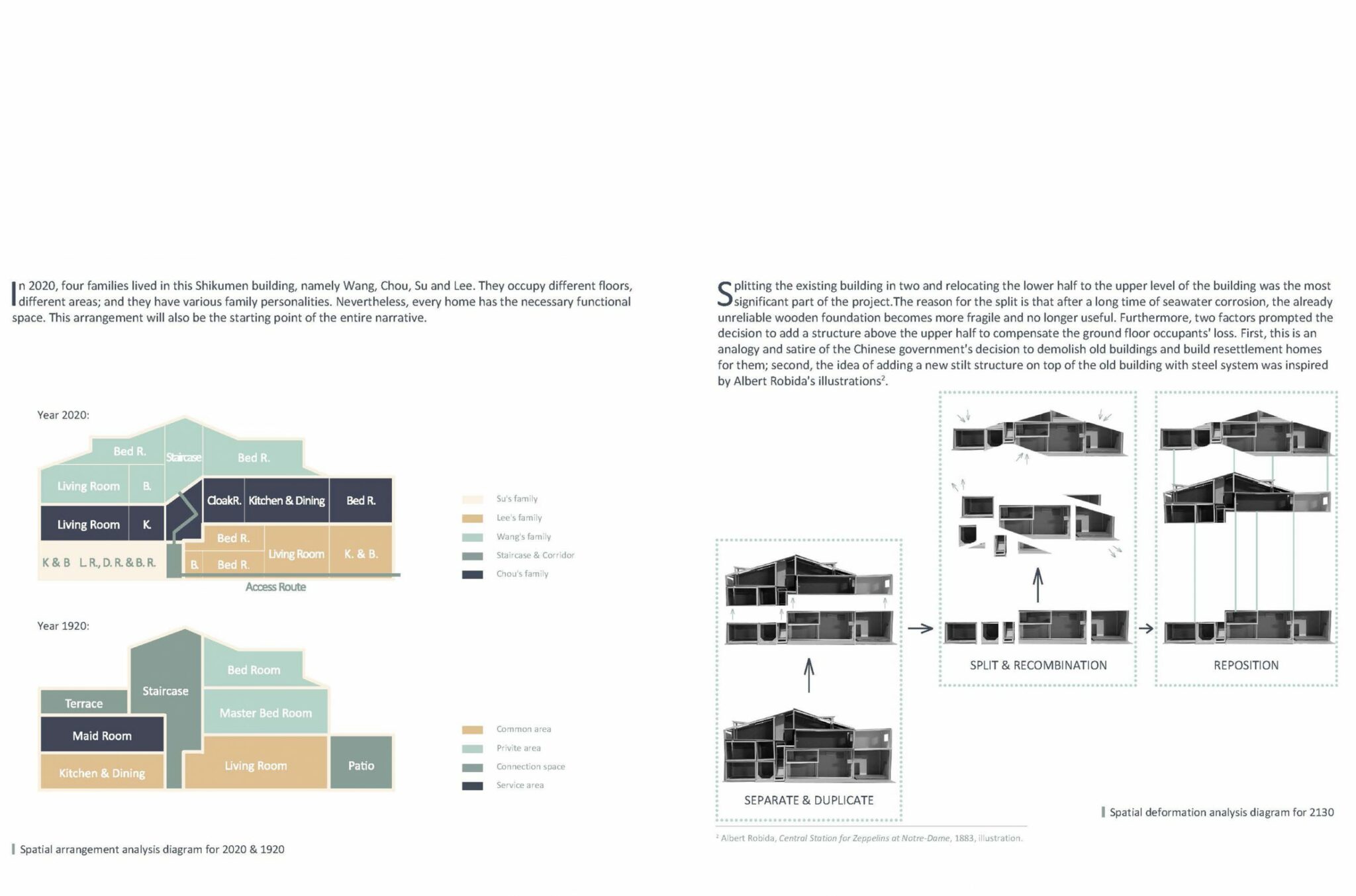 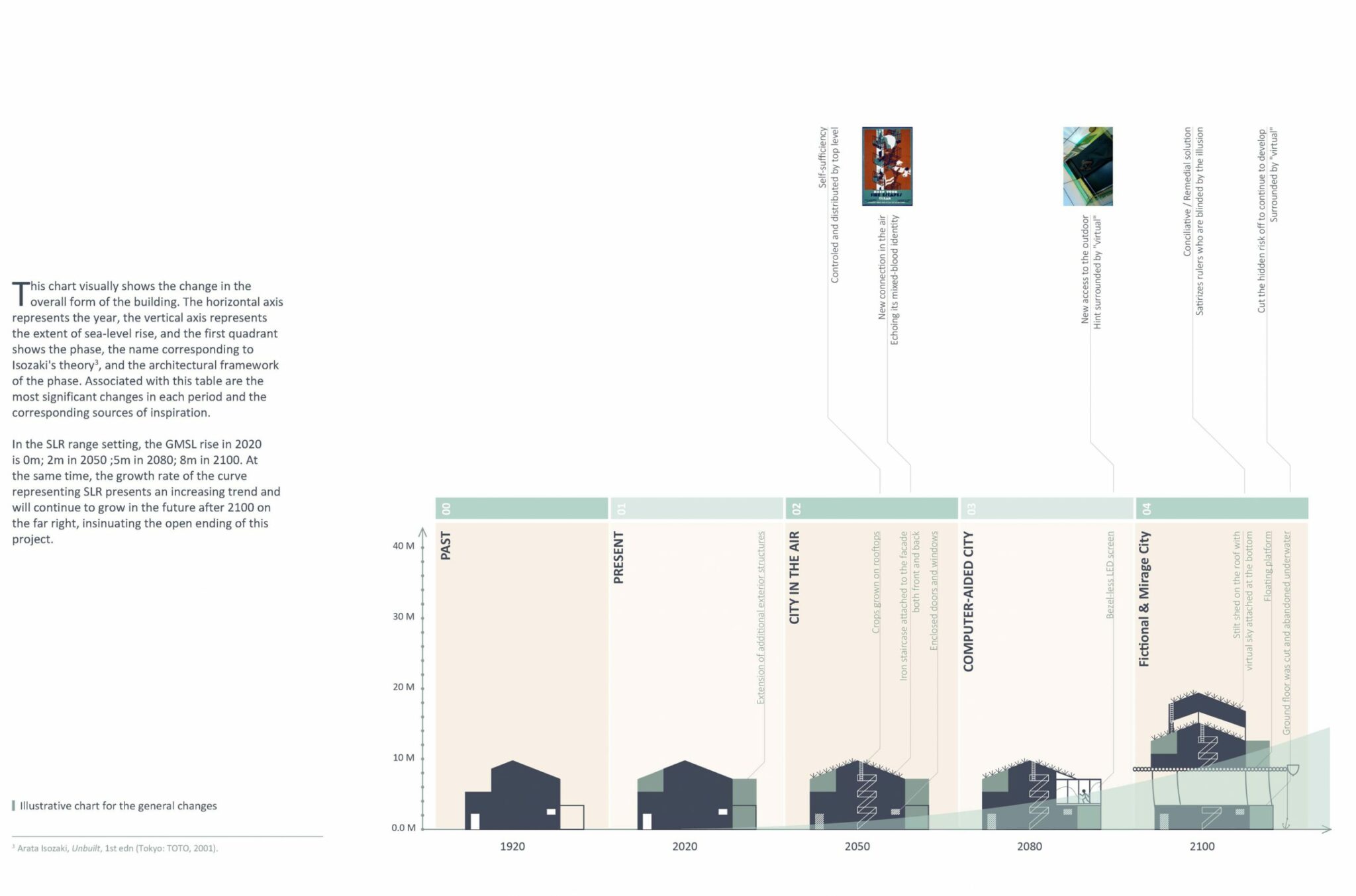 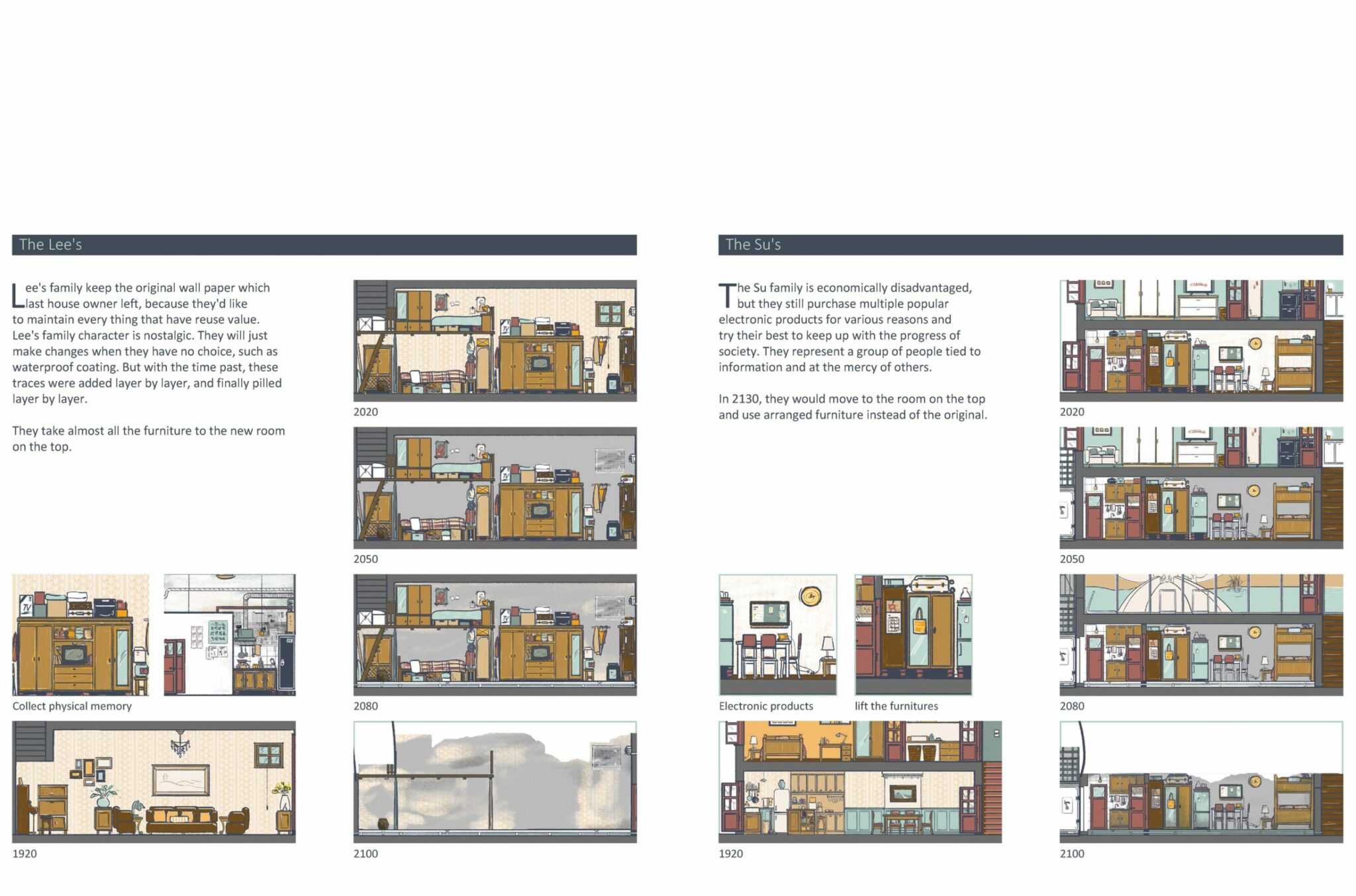 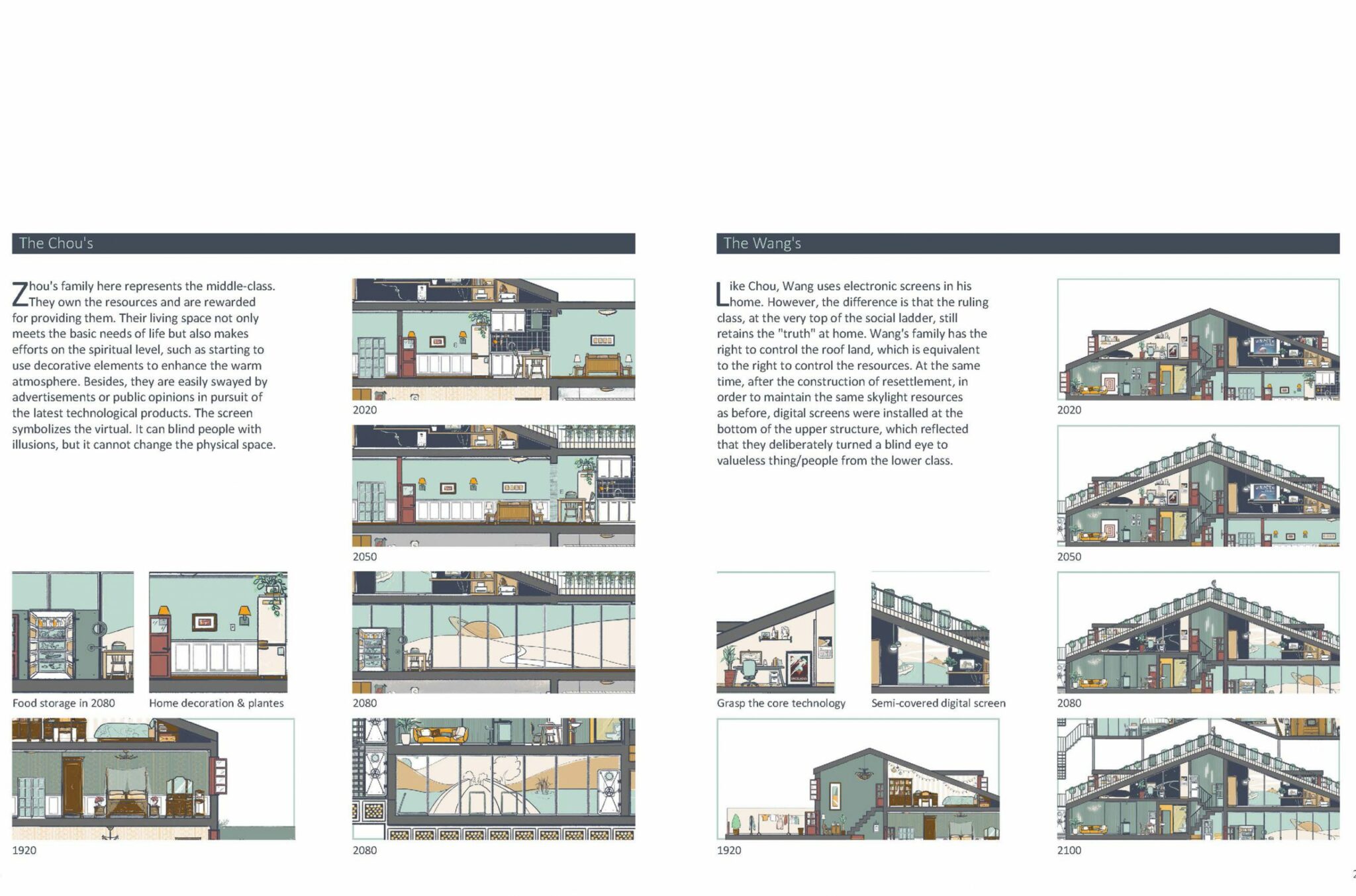 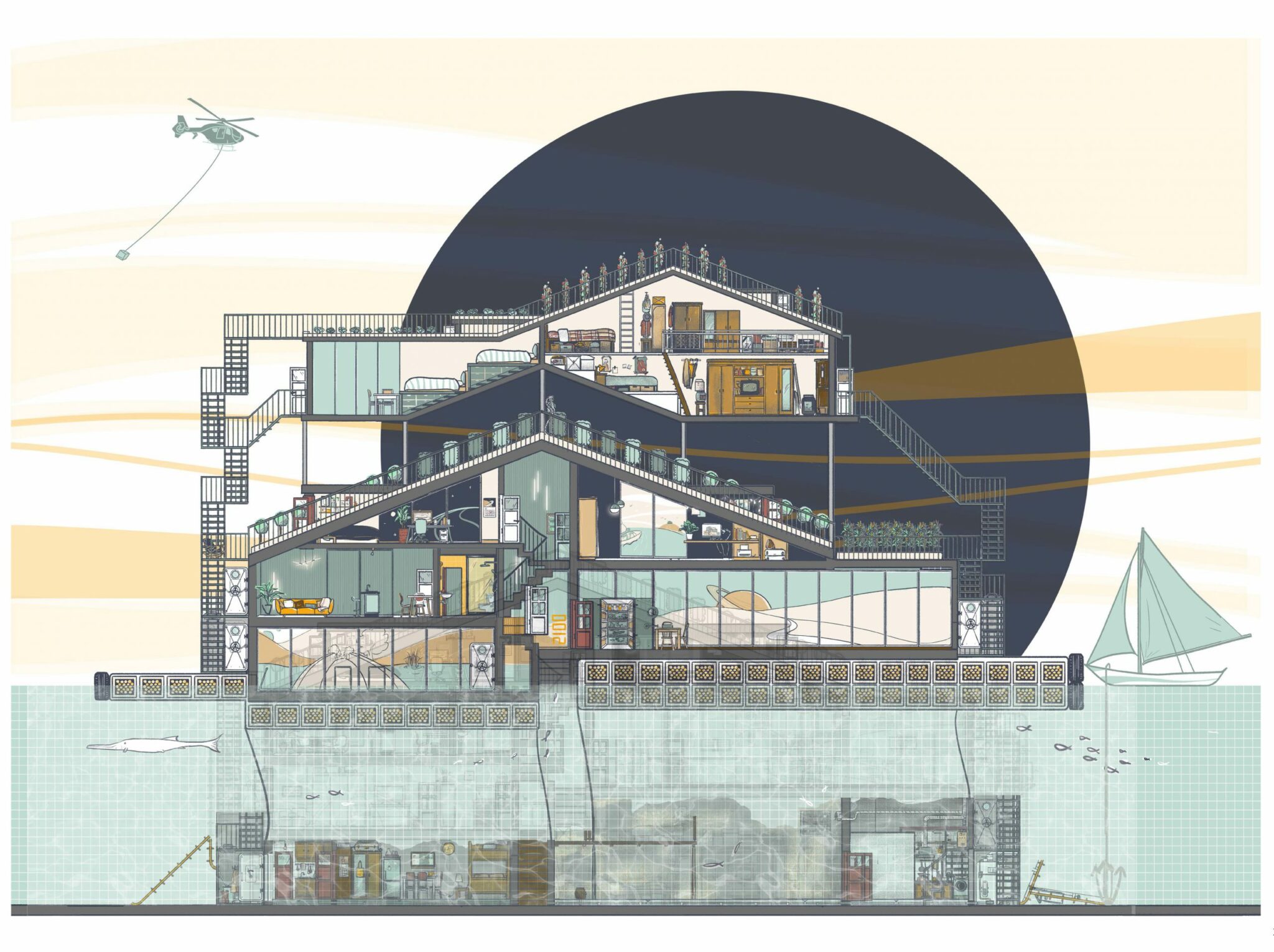 When the water come （The isolated island by Yining Fang）

This animation is a spin-off from the research project 'The Isolated Island' The Glasgow School of Art - MDes in Interior Design - Stage 3 Created by Yining Fang Music: Space Oddity by David Bowie