ADJUST THE IMBLANCED RELATIONSHIP BETWEEN FLEX COURIERS AND THE PLATFORM

The gig economy is becoming more and more popular, not only because of new technologies but also because of fewer job opportunities. People make money through flexible work functions to support their families. They have also begun to play an important role in awakening cities in the global epidemic, but when they work so hard, the platform (ie, the employer) can fire them at any time and unconditionally according to their nature, without any responsibility. Therefore, I want to find a suitable direction through investigation and research to better protect the rights of this group of people.

Through secondary research and data, I have a preliminary understanding of the work characteristics of the performance workers and the problems they face.

Current problems: 1. Lack of financial security; 2. Loss of dignity at work; 3. Inability to develop a career or to leave a career. The nature of the work of gig workers: exclusive health protection and contracts for employees and ordinary workers, but couriers and other gig workers are called self-employed, without a stable income and protection, and without any benefits. And unemployment insurance.

Based on the data obtained from the desk study, the questionnaires were aggregated for interviews and surveys. I mainly interviewed the innovation platform (CoopCycle) and the Courier team (from different countries: UK, China and Japan), and made many adjustments through feedback. For example, the target group should be narrowed down from general couriers to flexible bicycle couriers, and the work process, age-range and work experience of the target group should be redefined. Analyze their similarities and differences based on interviews to find their common concerns. Comparing Doteveryone’s report and collected data, “difficult communication” was selected as the main theme of the next research direction.

Have contacted the IWGB union (unlike traditional unions, it specifically provides assistance to those called “gig workers”, such as bicycle couriers, Uber drivers and cleaners, to help people beyond the scope of traditional unions), try to establish communication and cooperation with them. Because of the feedback before the interview, many young drivers have become members of the union.

Seb (a union worker) and I compiled the specific manifestations of “difficult communication” and the role of the union.

For the courier and the platform to communicate difficulties: standardized answers through AI and algorithm programs-lack of nuances and background-can do not solve real problems; encounter unexpected emergencies at work-can not get quick response help- -The courier bears the responsibility for refusing to work; the communication channel is too poor, and most of the inefficiencies are carried out through mail, which cannot bring smooth dialogue and sense of security to the courier; lack of real interaction between people; the communication rules are It is unilaterally formulated without considering the feelings of the couriers.

IWGB effect: As the advantages of trade unions in the proceedings as well as the target population to understand, so you can play the role of supervision of consultants in the rear. When problems arise in communication, they can communicate with the platform through specific situations to participate in the interests of union members (couriers).

Based on previous thoughts, the first suggestion was made. Set up two interactive parts, the sharing part and the help part.

The courier can share his work situation and the problems encountered in the communication interface, as well as the problems he encountered and the parts that he felt inhuman or too harsh when using the platform. The platform can give feedback based on these opinions and shared things. For the few people mentioned those useful questions adverbial clause: recommended that the platform will be the payment of allowances, reward him as improve platform library personal contribution.

People can choose interactive buttons of different colours according to difficulty and urgency, each
. The colours represent different situations and contact information. If the flexible express company is unable to contact any staffing service and cannot solve the real problems in time, you can single-click the partner (IWGB) button, and the union will record these problems as (litigation) materials and target them They provide specific suggestions for different changes. IWGB will use its own resources to continuously contact the platform to reflect the problem of the courier. If the platform still cannot solve the problem and bring some navigation consequences to the courier, the platform must provide certain compensation; otherwise, The union will take measures to record the materials.

After giving the first suggestion back to the former replacement (Ewan), he thought that the interactive operation process the interface was too complicated and would waste a lot of time. The process can be optimized to make it easier to operate. In addition, NING MA, who met me on a similar topic when I was sending mass messages on Facebook, is also using algorithms to improve the work of gig workers. After asking her opinion, she thought that the reward point could be concretized, which was what the flex couriers really cared about. Only in this way can the work enthusiasm of couriers be enhanced and the platform is more efficient and praised by the public. After listening to her advice, I simplified the operating system process and set up a ‘wish page’ (study future plan, wish items) for each courier. When a shared suggestion or question is popular and meaningful, the platform will support his desired project and learn plan to encourage him to contribute valuable information Based on the improved proposal, I sketched some key interfaces. To determine and improve some details (such as the location of different information, the ratio of different information, the appearance of graphics, etc.), but also to determine the specific information and content of each section

Creating more visual languages ​​to display more intuitively, such as storyboards, key interactive interfaces with their relationships and process program.

For this suggestion, it can not only bring a lot of positive effects on bicycle express companies.

Courier: Couriers have more voices to express their opinions and suggestions to protect their rights.

Platform: Expand the good reputation of the platform, increase employees’ sense of belonging to the platform, and find better suggestions and directions to improve/optimize its governance structure and brand.

For future plans, there are mainly three things:

Try to fully test and communicate with them through joint design and seminars, and solicit their opinions and suggestions on the project, to adjust the project prototype to make it more suitable for the life and habits of the target population, and to serve them better.

Redefine the role of unions

The new union (IWGB) has played an important role in safeguarding the rights of flexible delivery companies through previously collected data, but usually only appears behind the stage after the rider has trouble. I want to try to discuss the future plans of the union with the union staff (Seb). Through closer communication with the platform, can the platform play a more important role?

Through chatting, I learned that she had just obtained the computer information system index in the United States. Her project is very similar to mine. He uses his professional programming to improve the rights of performance workers. 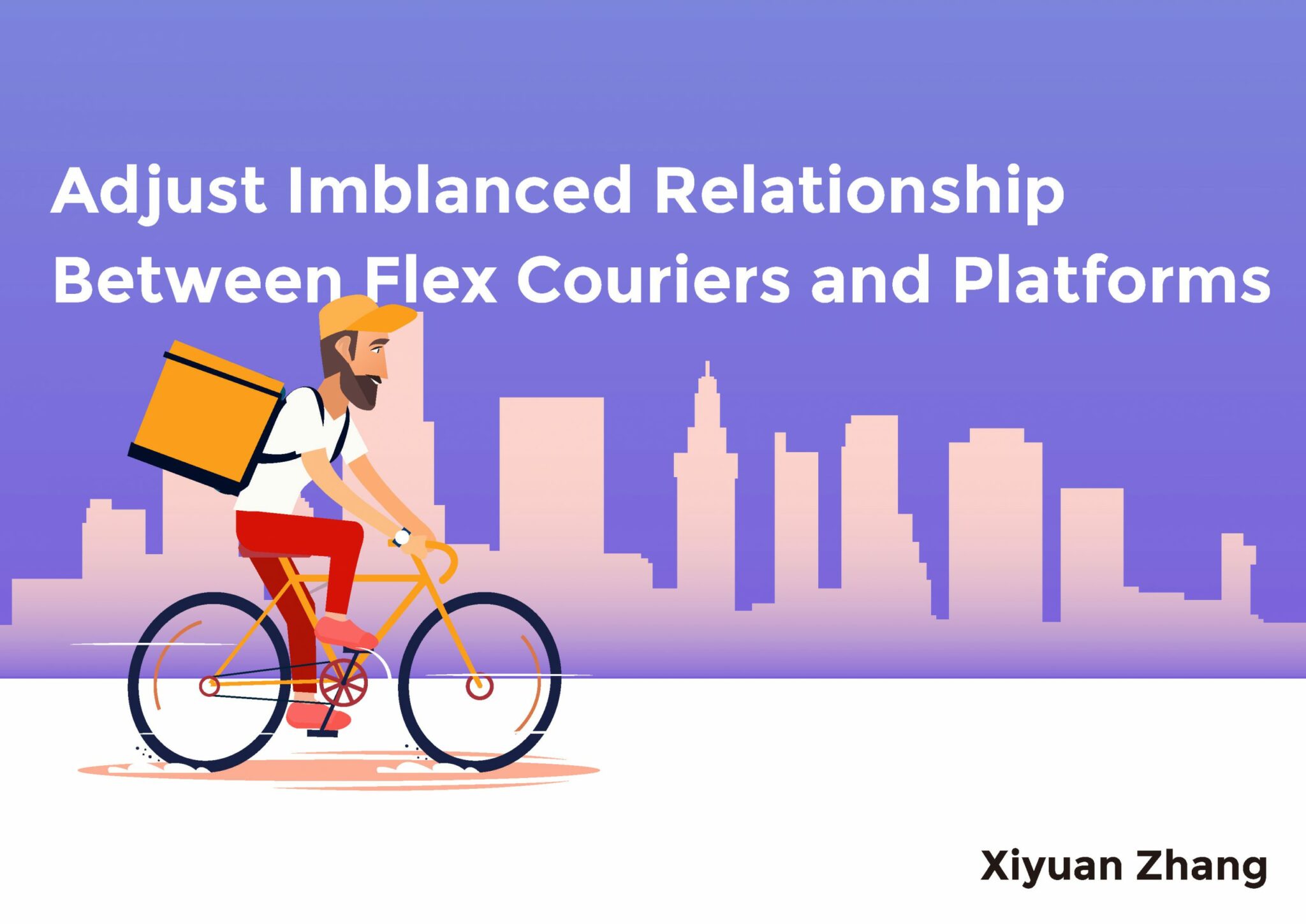 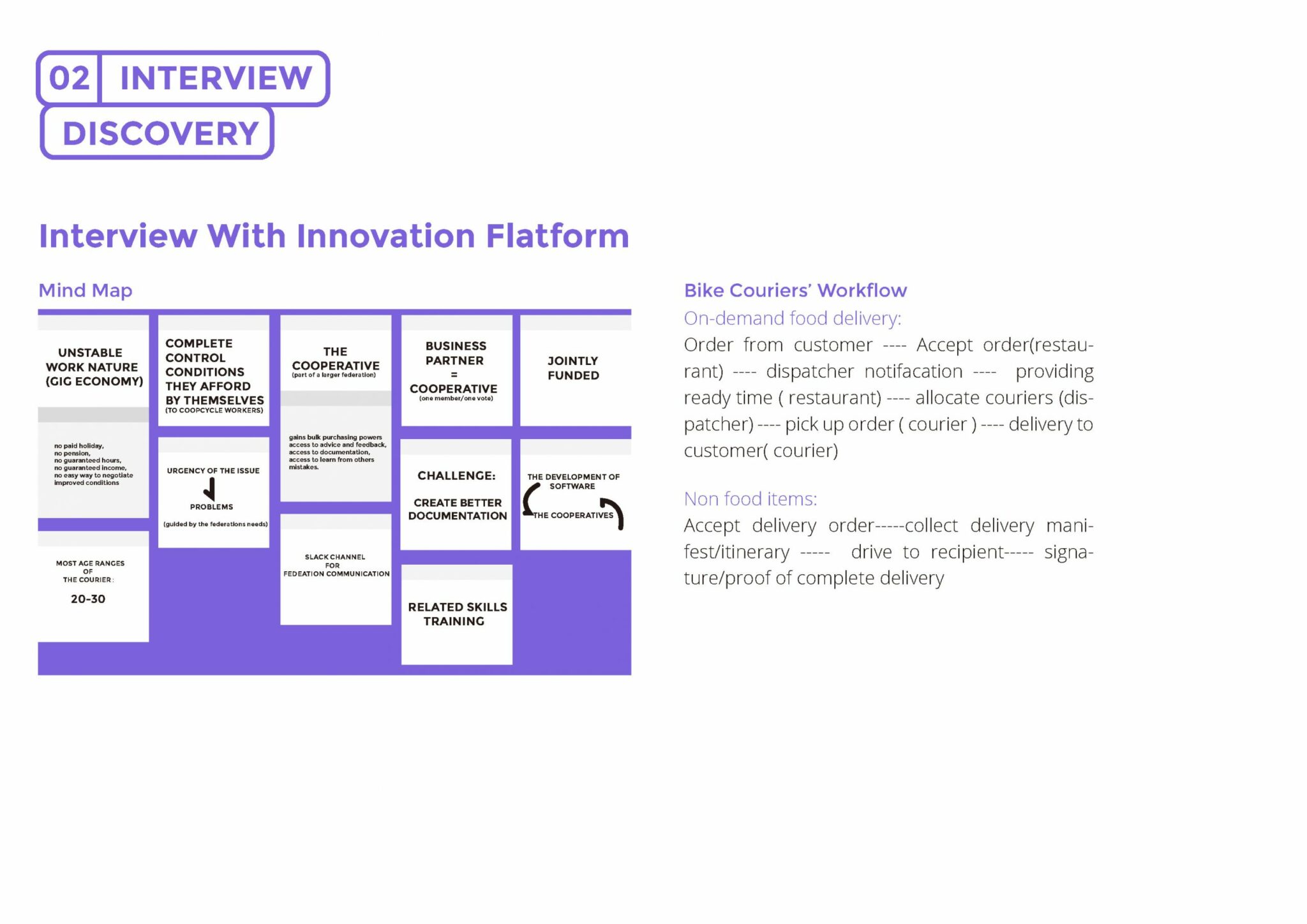 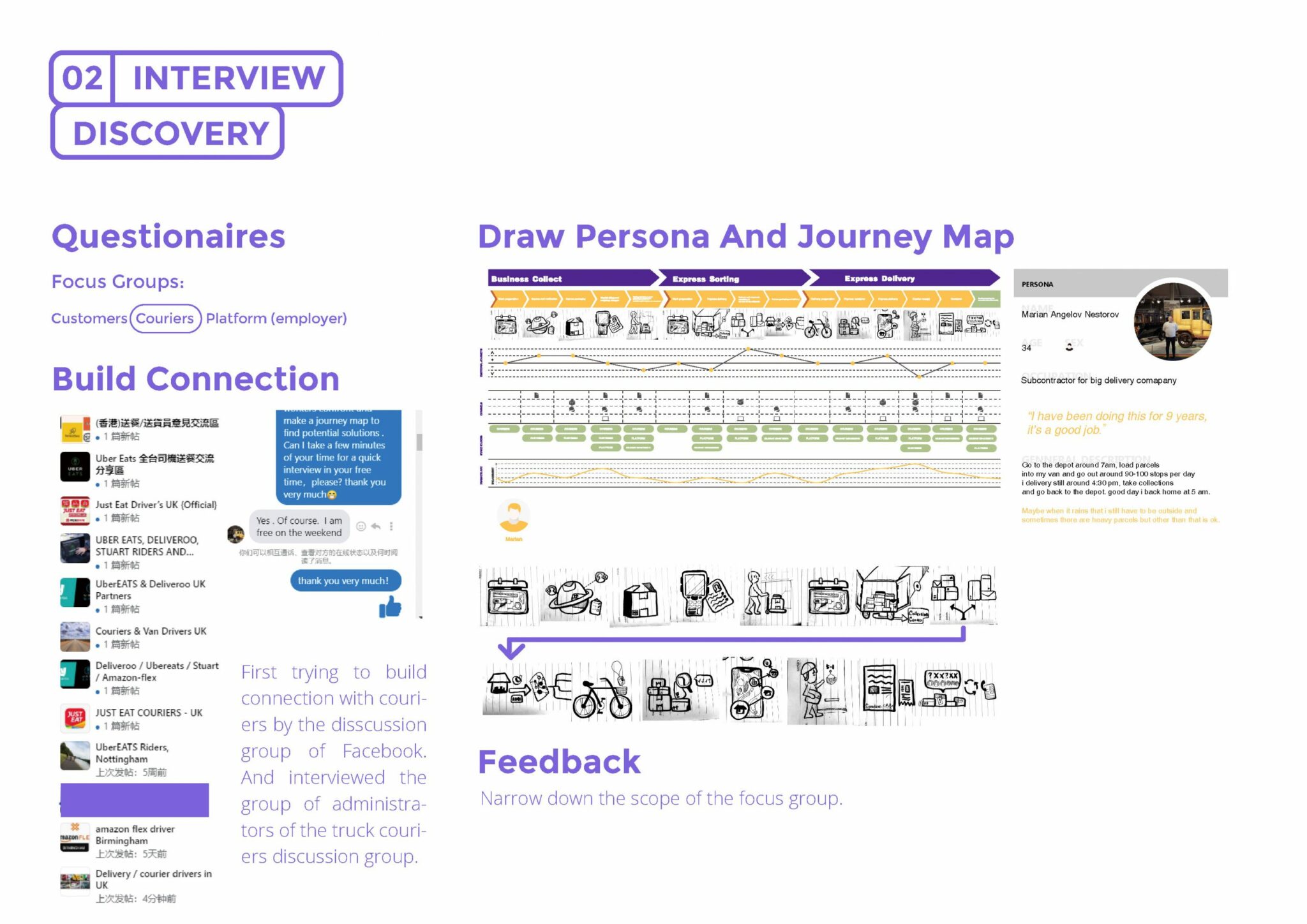 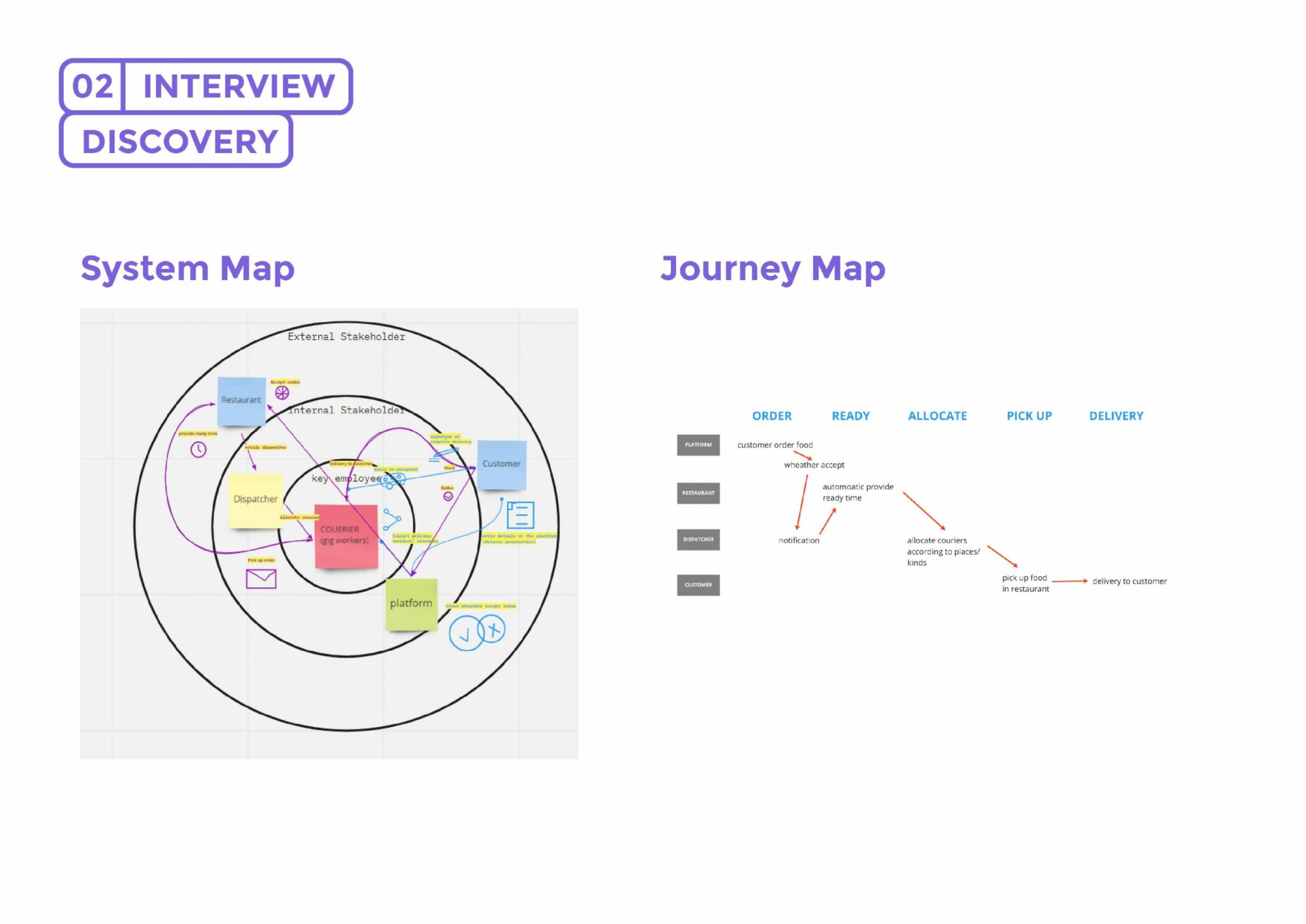 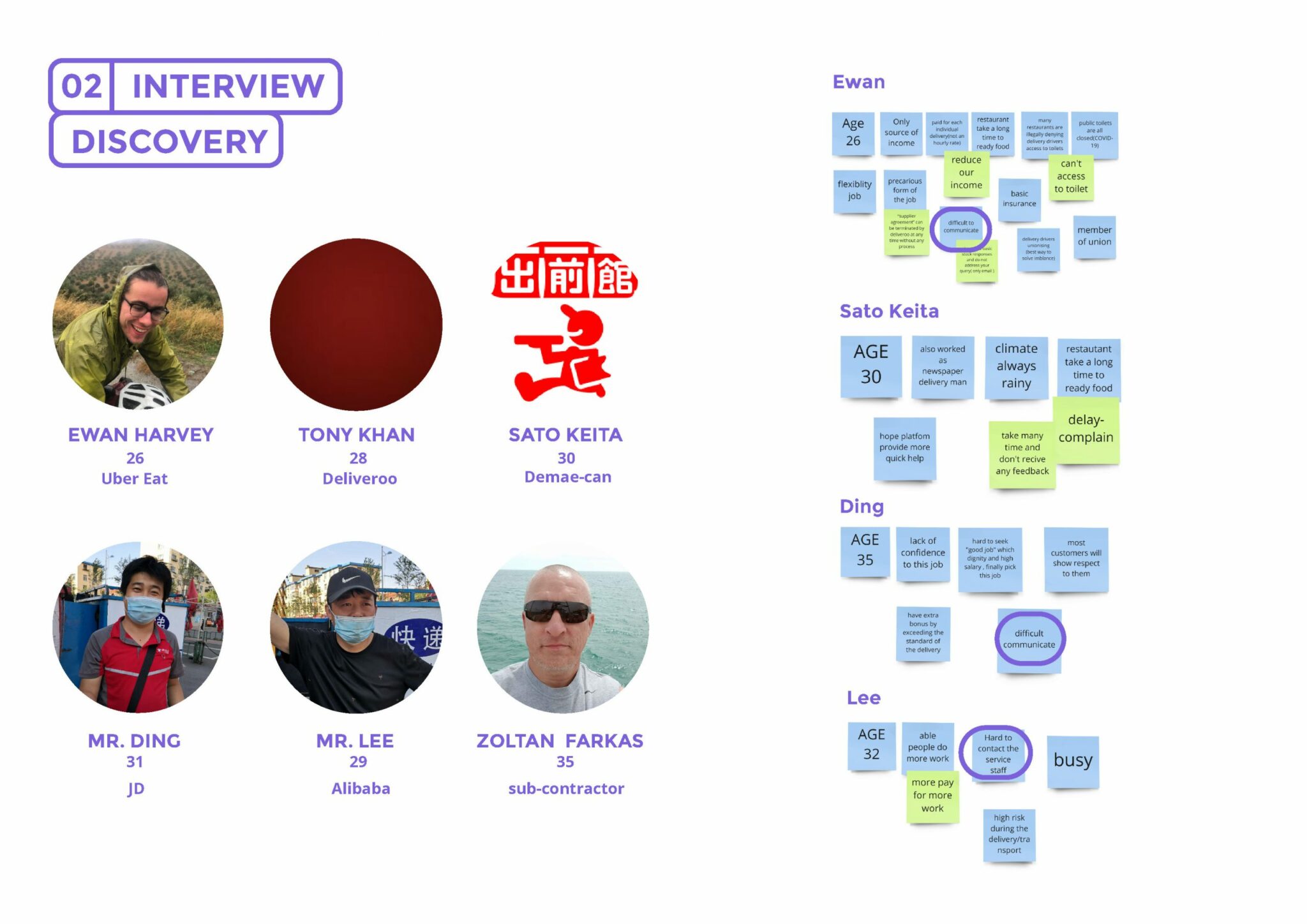 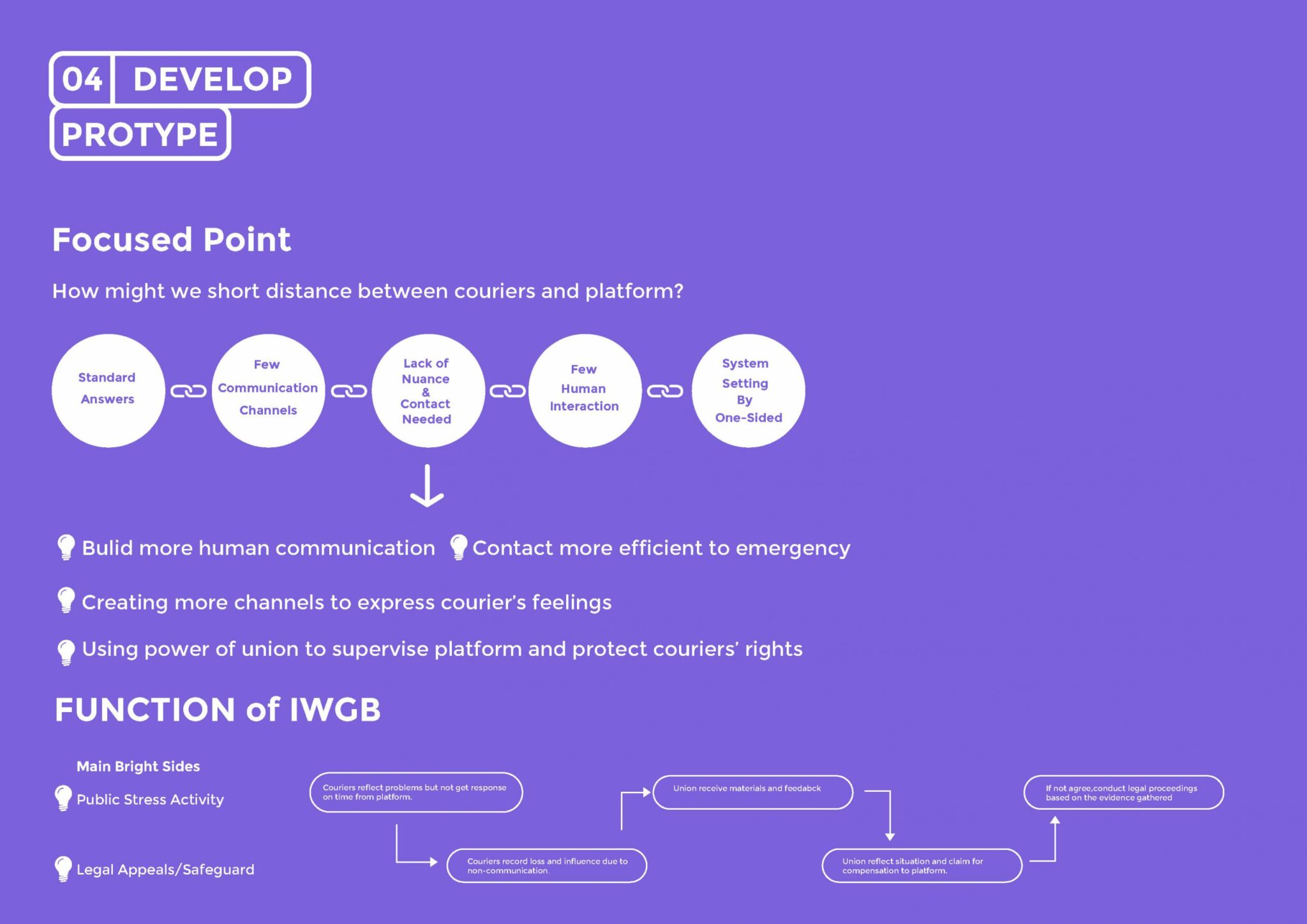 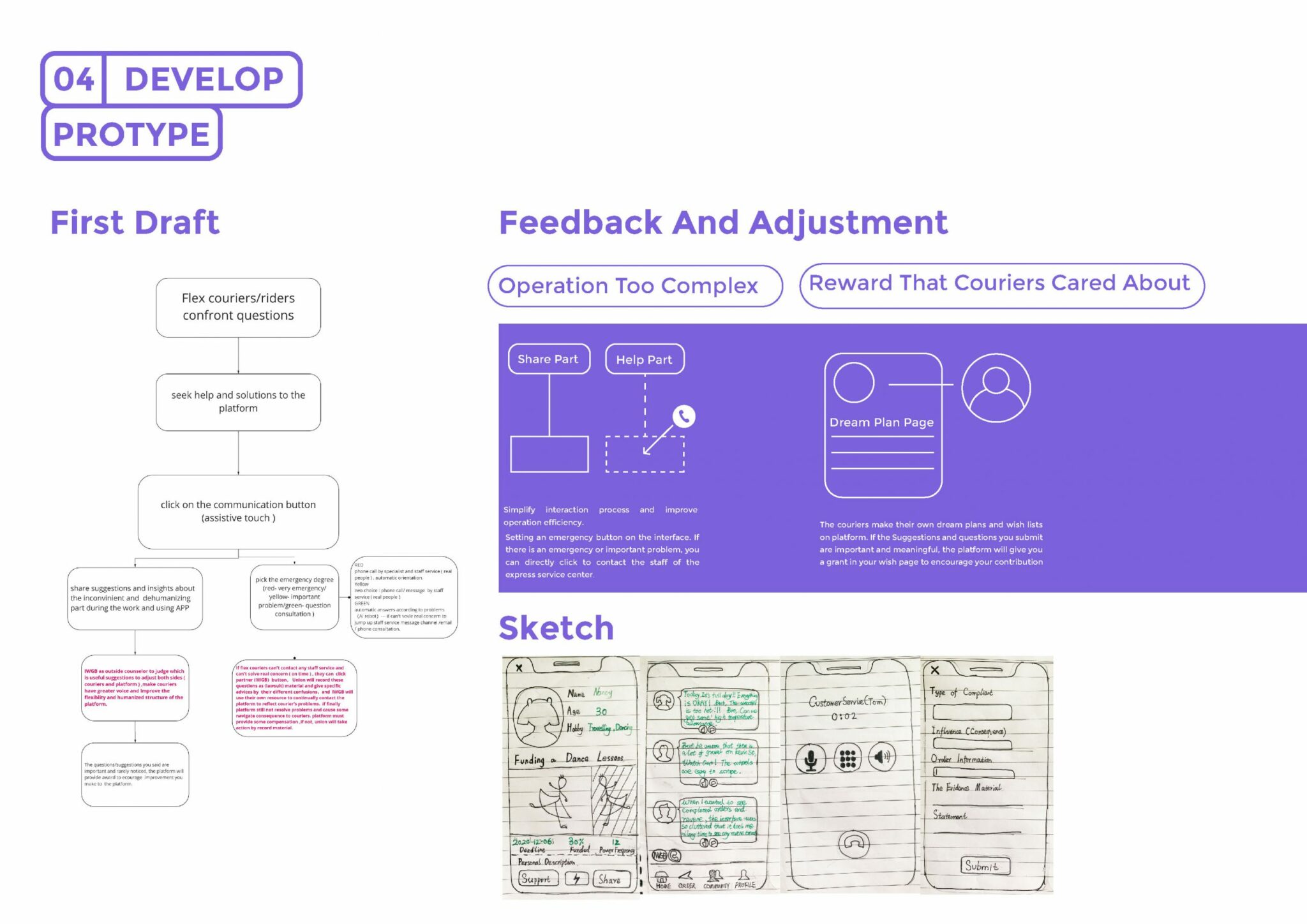 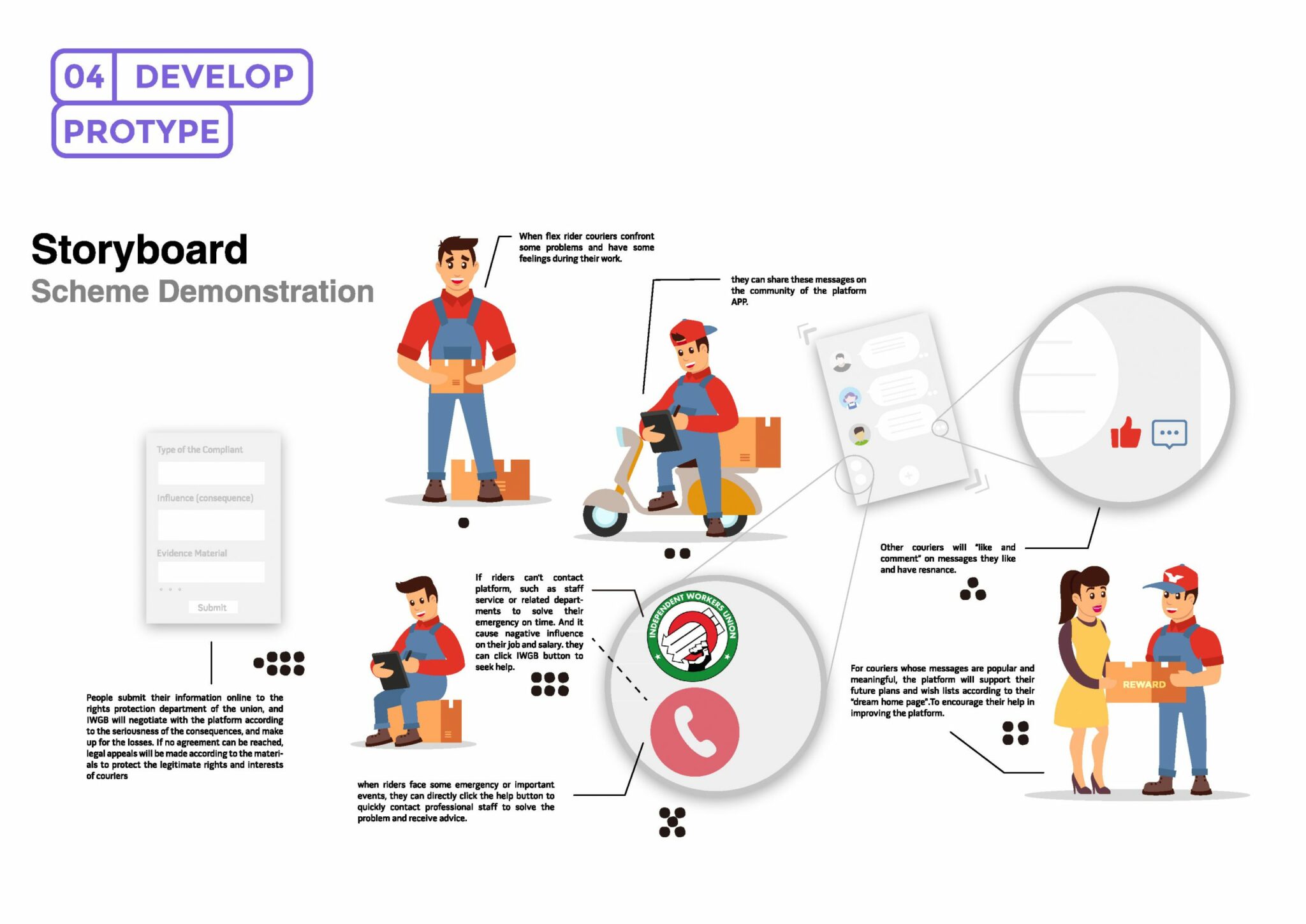 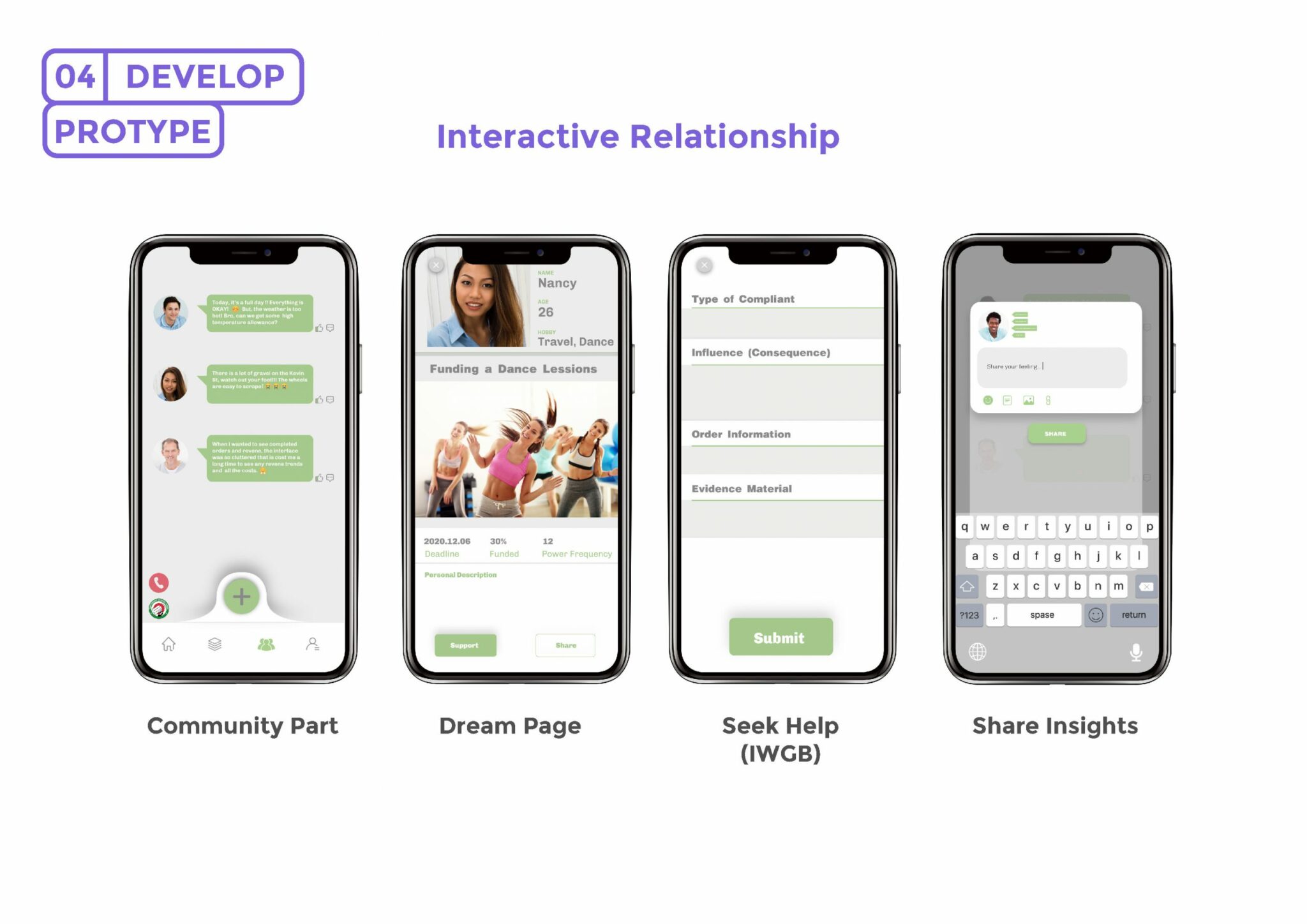 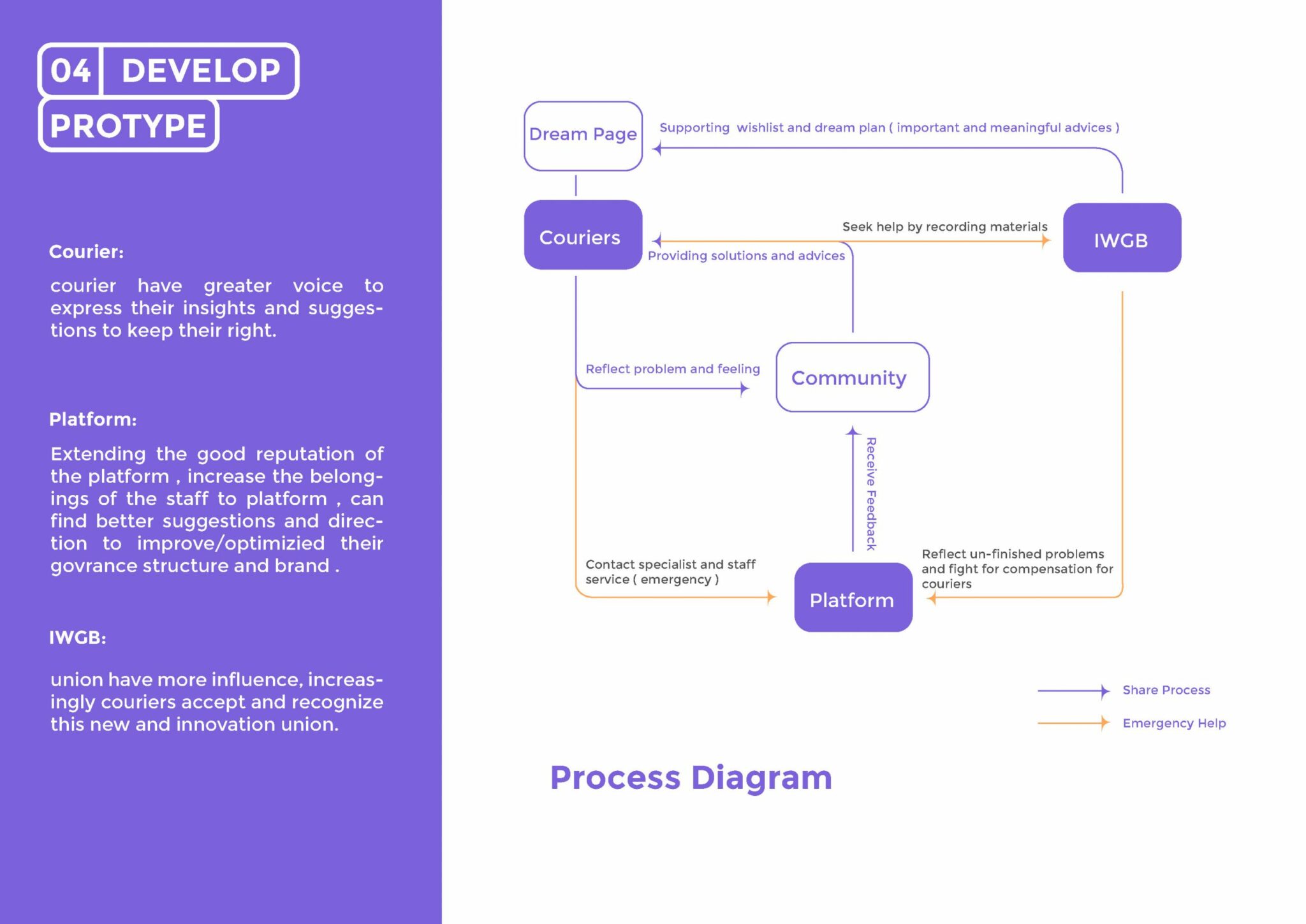 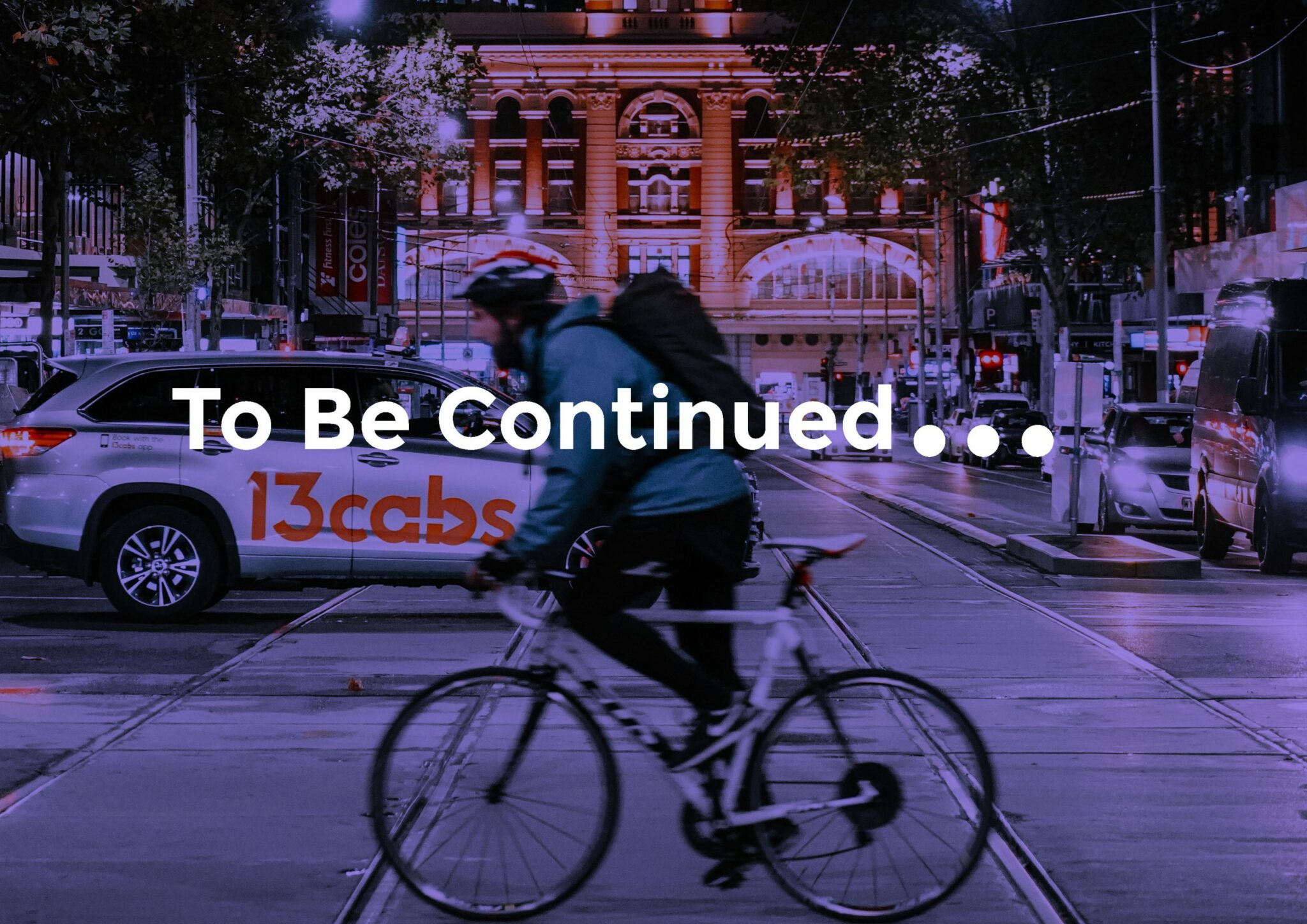