Millions of people around the world often encounter artworks. Whether in museums or on the Internet, art is a ubiquitous part of human life. The fascination with art is a unique experience of influence. Although the feelings are different, it is undeniable that people’s physiological reactions can be stimulated when viewing artworks. This reaction process makes artworks have the ability to affect basic aspects of emotion or body, such as self-regulation, personality, and worldview. Changes in cognitive abilities. At the same time, this process of responding to artworks will even have an impact on people’s mental health by reducing stress. Therefore, this project will explore the interaction between artworks, people and space, and then use a three-dimensional visualization space to present this abstract reaction process that occurs in our brains when people view artworks.

Painting is the most common form of visual art expression. These products created by artists are an external expression of the artist’s inner world view and subconscious. When some works are created, there will be some motivations to encourage artists to present the content. Sigmund Freud has been studying artists and conducting psychoanalytic art throughout his career. He believes that art work is focused on a method of imagination. Art is created from imagination, can be analyzed to explain its meaning, and therefore can also exist as a means of communication. Artists pass their works to others in a way of understanding, participating, and experiencing the world, and thus establish connections with others. As a product of inner emotion and subconsciousness, artwork has the function and power to communicate with the outside world.

In the process of being appreciated by people, people’s basic emotional feedback is transformed from direct acceptance of the content of the painting to a personal understanding of the content of the painting. People will first use their eyes to accept the information conveyed by the artwork, and then according to their own understanding, add personal imagination, and convert the artwork into personal content in their minds. The process of touching people by artworks comes from the endless space of imagination that the content depicted by artworks brings people.

The development of imagination has constructed many wonderful moments in people’s lives. Imagination involves a process of “connection”, in which experience evokes thoughts and thus becomes integrated with thoughts. Imagination can help people visualize invisible things and form images of objects or experiences before bringing them into physical reality. Imagination is built on vision, which is a supplement to vision. People transform the two-dimensional graphics they see into virtual three-dimensional space in their own imagination space. Artwork will stimulate people’s imagination, and at the same time, imagination will enrich the content beyond the two-dimensional plane of artwork, and make artwork full of more possibilities.

Emotions will cause people to produce a series of specific performance states for a series of specific themes. Imagination expresses our emotions and responds to our emotions. Therefore, when describing and constructing the three-dimensional virtual space of this project, I will start from the five basic core emotions of people to describe the imaginary space in the brain after seeing the artwork under different emotions. At the same time, these five spaces They are integrated on the basis of a certain logic.

Art reflects real life and conceptual experience. Art is important because it is considered therapeutic, it provides an escape from reality, and it also provides meaning to life. The therapeutic effect of artwork is reflected in the process of viewing and appreciation, it enables people to establish a connection between the mind and the body, and uses imagination to build their own unique and private space. Imagination gives people the right to change subjectively. People can have emotional and spiritual dialogue in the virtual space of imagination, cover up some things, and transform them into new things. The model of this project will show a healing process, which exists in our minds and is the product of the collision between painting and imagination.

In the creation of the two-dimensional painting part of this project, five works by the surrealist painter Dali were referenced. In his works, mirroring is mostly used to express truth and falsity, so I also used mirroring to express the real and imagined space in my design. In the painting of swan reflecting on elephant, he used purple and yellow as opposites to describe the two opposite worlds. My work extracts these two colors to construct a world that is upside down, where the false and the real are opposed. At the same time, in the false world constructed by imagination, people will feel that time has stopped, and a metaphorical pattern is needed to help people distinguish the boundary between the two worlds and avoid getting lost in the falsehood. Many art historians point out that “red fruit” and “strawberry” are metaphors that symbolize people’s desire to pursue happiness, so I chose strawberry as a sign to guide people in the right direction in this amusement space.

The space of this project is divided into five spaces to express according to the five basic emotions of people, namely sadness, disgust, fear, anger and happiness. In order to express the entertainment and healing characteristics of the space, I abstracted some basic entertainment facilities. Forms and use their functions to metaphor the nature of space. At the very bottom of the space is the disgust space, which uses a maze metaphor, and the anger space for bumper cars continues upward, expressing anger with collision. Continuing upward is a falling roller coaster, used to express fear, and there is a sadness space that expresses fluctuations with huge ups and downs. This model has a forward part and a reverse part. Among them, the part of the hot air balloon that only metaphors happy emotions has only positive space and no reverse space. The process of forward and reverse is a metaphor of the healing process of art to the human spirit. At the beginning, emotions were negative and sad, but after a series of mental space games, everything developed into opposites, the negative emotions began to change, and finally reached the peak of happiness. 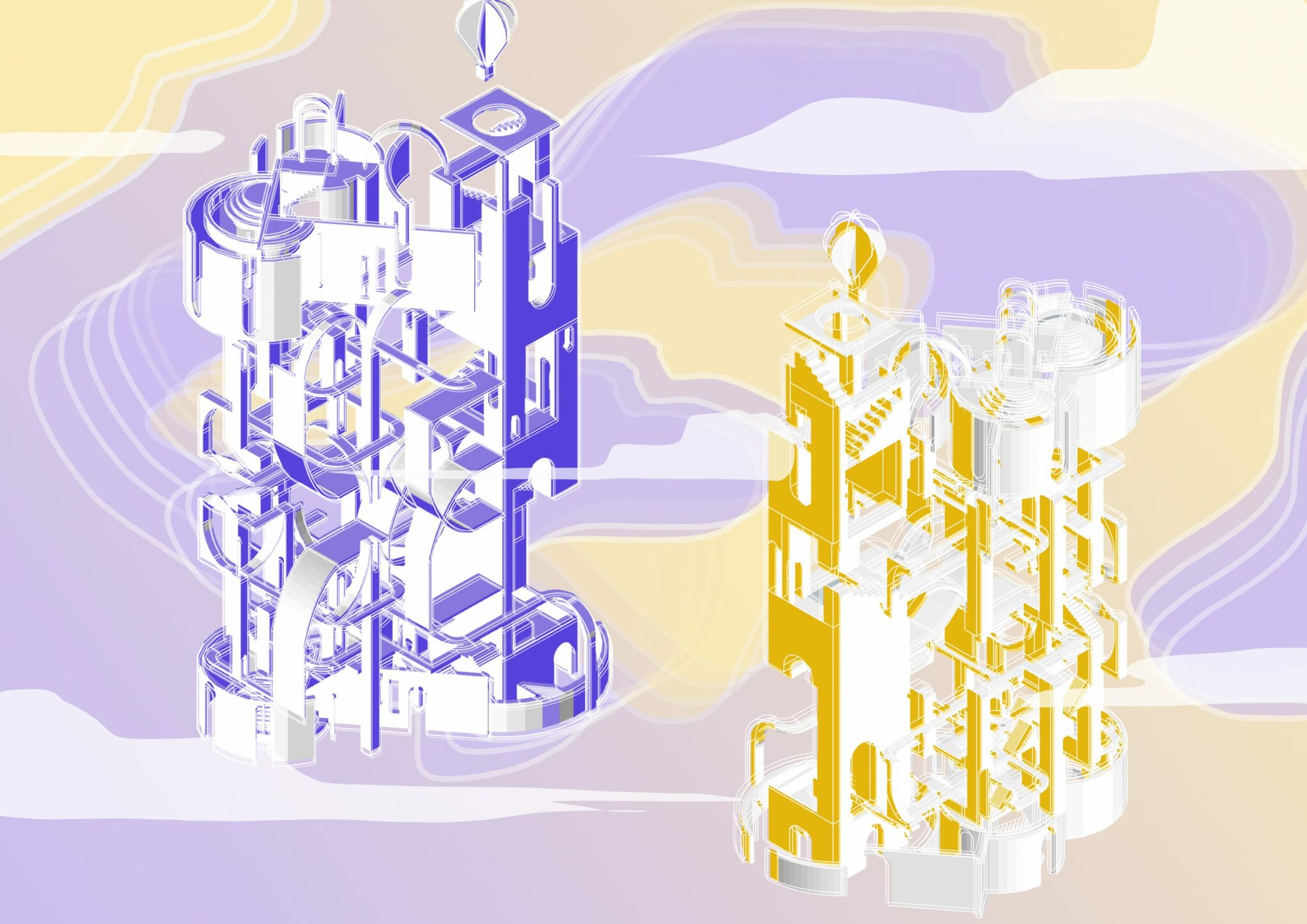 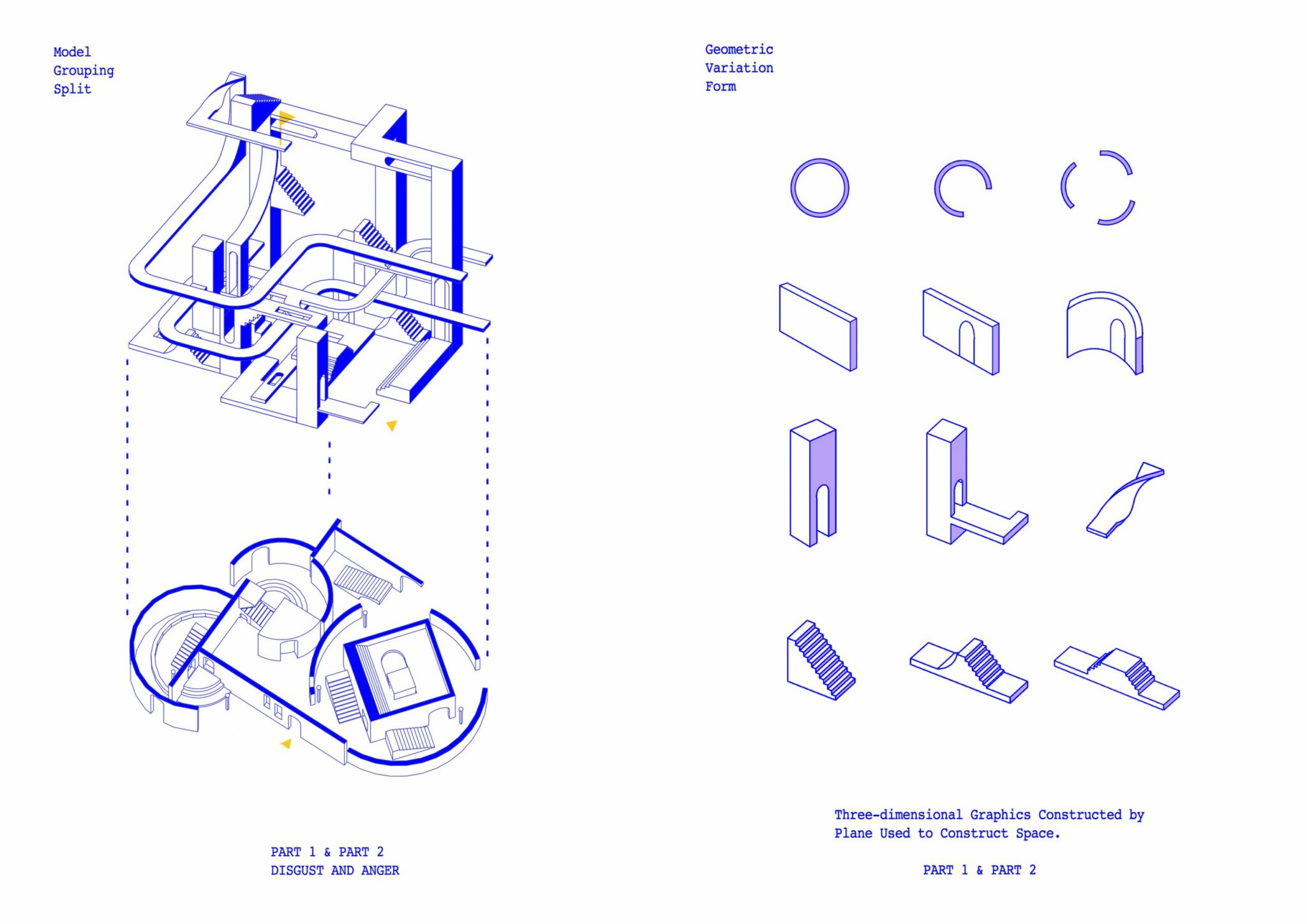 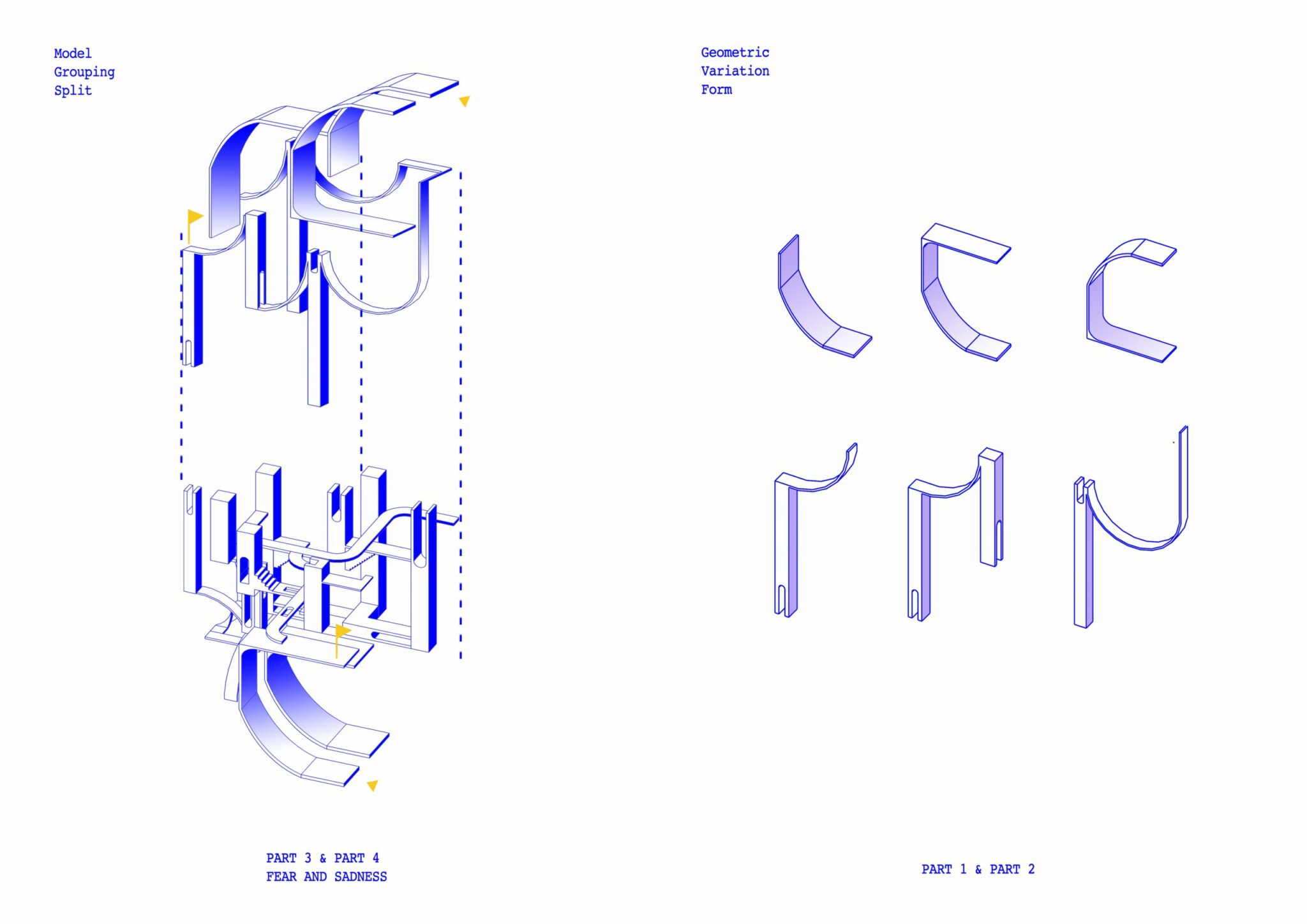 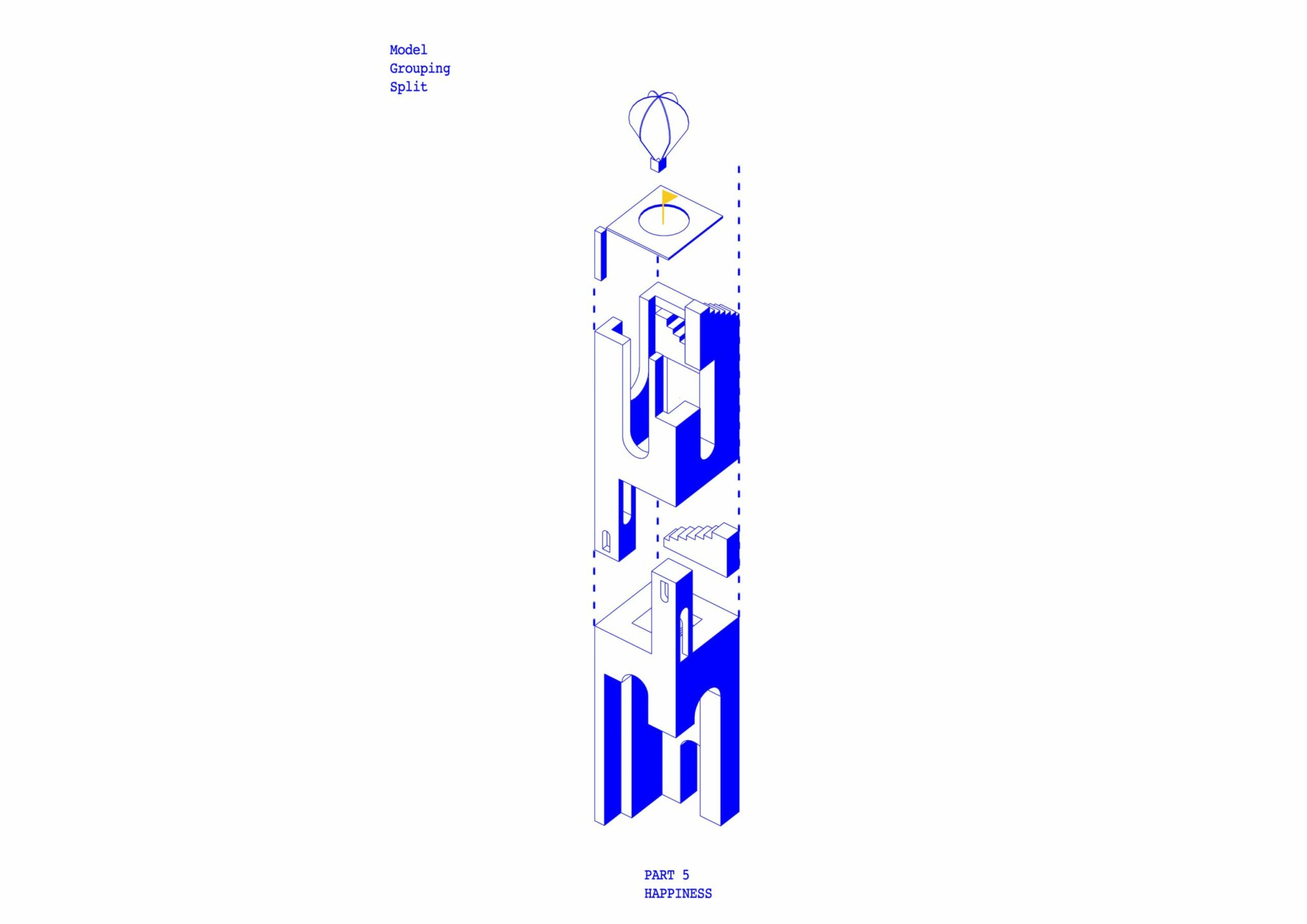 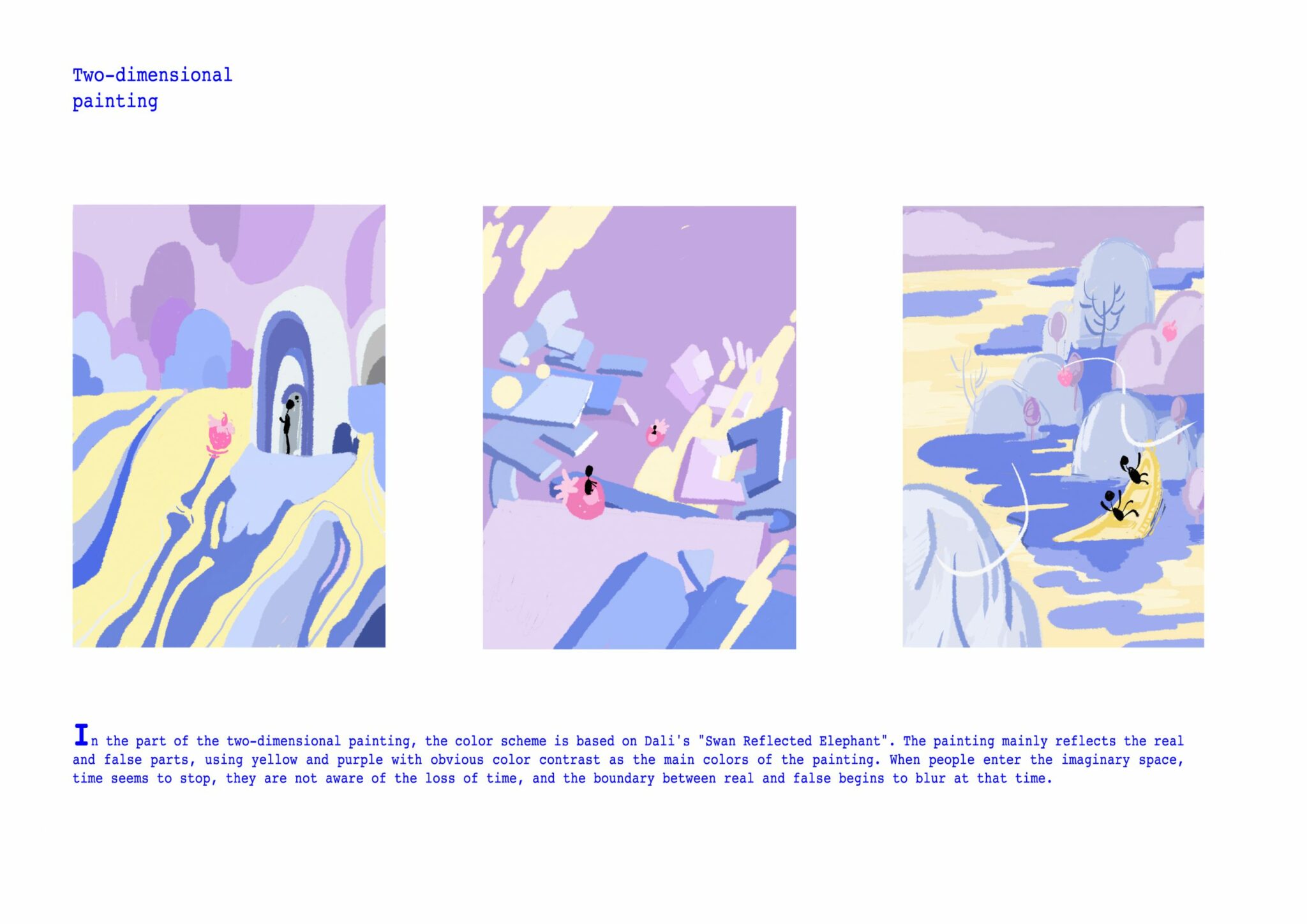 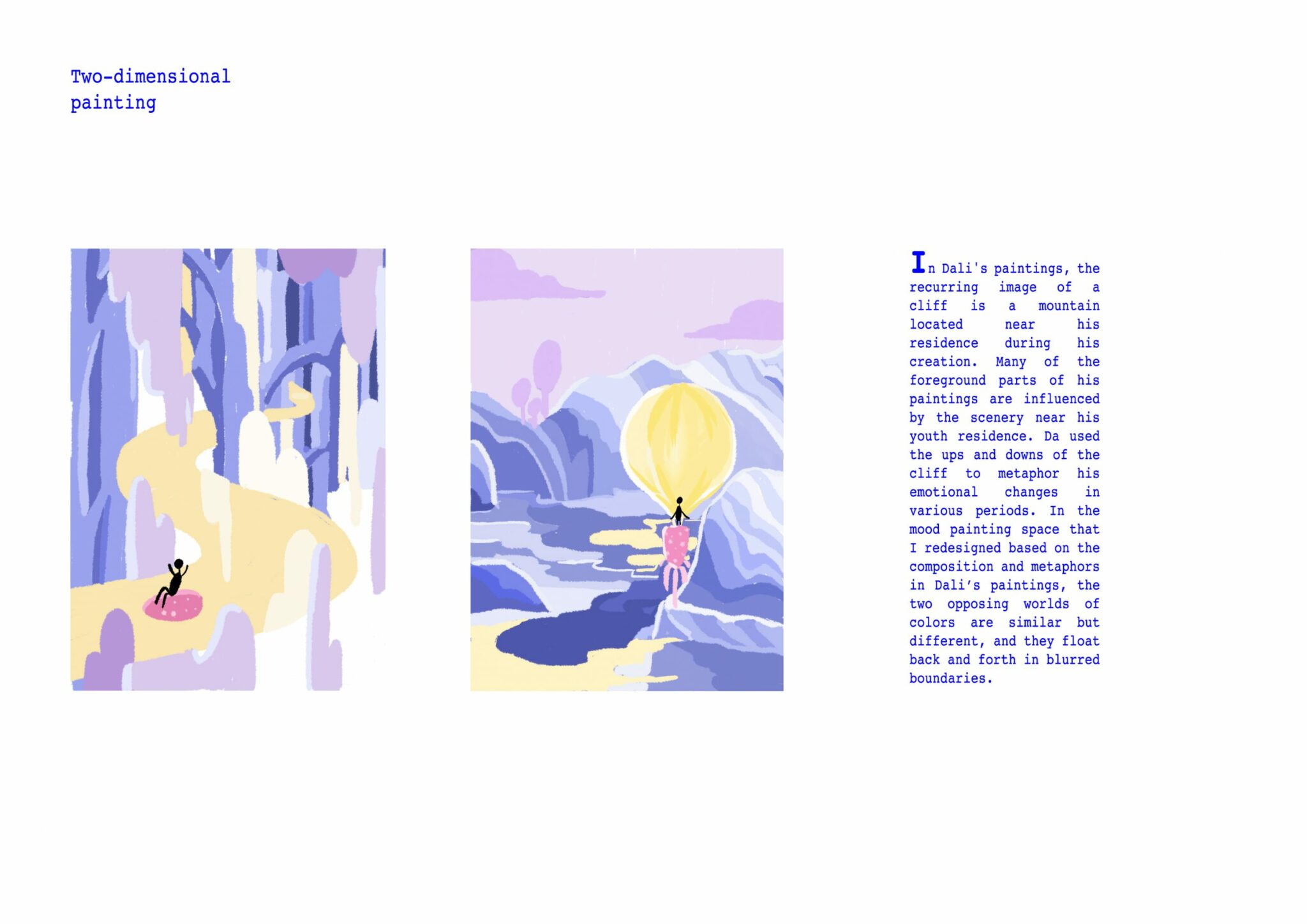