The following study explores a new form of urbanism that can take over the Glasgow city center. The study is based on observations and modeled with reasoning studying theories that back the reasoning. The study looks at modeling an architectural form that amalgamates architecture and play using an array of curated elements, thresholds and functions. The study is developed in 3 stages:

Stage 1: Observations The observations collected have been collected post exhaustive exploration of Glasgow’s city center, especially its history, culture and development over time. The site was analyzed for its land use, junctions, accessibility, density, pedestrian and vehicular traffic, larger city connections as well as the differences in elevations. These observations culminate in raising a series of questions. These questions, in turn help in pointing our certain obvious issues with the urban fabric. The lack of open to sky spaces, the rising levels of density, the lack of breakout spaces and the diminishing centers of public assembly. Conversely, the observation couples with questions helped the analysis of site in terms of identifying its strengths, weaknesses, opportunities and threats. Moreover, the observations, lead to the exploration of play as an architectural element. The observations prove to be an important stage of our study as they are notes to fallback on and model design developments from the perspective of children and adults, in adherence to their movement and activity across the site.

Stage 2: Literature Primary and secondary data collection was all done in adherence to references and citations that have explored similar strategies in similar situations to create new forms. The study of literature culminates in the analysis of site that provides us with a formidable hypothesis – architecture and play can be amalgamated to create an urban form. The urban form itself is developed from experiments around expansion and contraction of spaces that respond to changing vision cones. The composition and organization of architectural elements is curated to efficiently engage user groups and functions. Furthermore, the parameters set for data analysis emerge from the surrounding buildings and site barriers, thrusting the study us to adopt and iterate Stallan Brand’s design proposal.

Stage 3: Modeling parameters The architectural language is developed as a result of user movement, site massing, and composition of the form. Plot divisions, accessibility, and functions give an order to aesthetics and design. The massing itself is a response to the urban fabric. It is an attempt to play with surfaces that integrate seamlessly into one another and the streetscape. The urban form generated as a result of design development addresses the notion of play at varying thresholds. It imbibes the childlike wonder of being in spaces, exaggerated through modeling of masses, portals, and thresholds in accordance with a user experience that looks at users to develop their own navigation system based on the order the form adopts from materiality and color. It is an attempt to curate scales such that it creates a paradigm shift in the way we look at Glasgow’s urban fabric.

The form is majorly modeled to be an open public space that curated movement by instilling a sense of navigation on its elements. The entire form can be collectively viewed as a coming together of the smaller kits of parts and engage with one another at varying scales. Each part has a certain role to play in hosting children and adults and activating multiple functions using materiality and color.

The integration of play through the urban form is rooted within the response the form offers by opening up its ground plane and terraces (both of which are internally connected as well). The permeable nature of the built form, in terms of both structure and the skin, develops from contracting and expanding spaces based on the site parameters and the surrounding built form. Furthermore, distinct circulation blocks double as navigational nodes that engage users and help them develop a sense of wonder through navigation.

The attempt is to create a new sense of urbanism amidst the city center, one that is more inclusive and active in its approach and management of users, that provides breakout spaces at varying scales and forms to develop niches that can best activate the structure in terms of aesthetics and functionality. There is a careful consideration given to threshold treatments and their engagement with the user is particularly curated to create memorable experiences through exaggeration of scale and modeled features such as furniture, walls and openings. Holistically speaking the urban form is an experiment that stemmed from the observations of Merchant city’s urban fabric. It is an attempt at bringing curiosity back into the users by appealing to everyone’s sensibility, vision and movement to narrate a sequence of urban play. 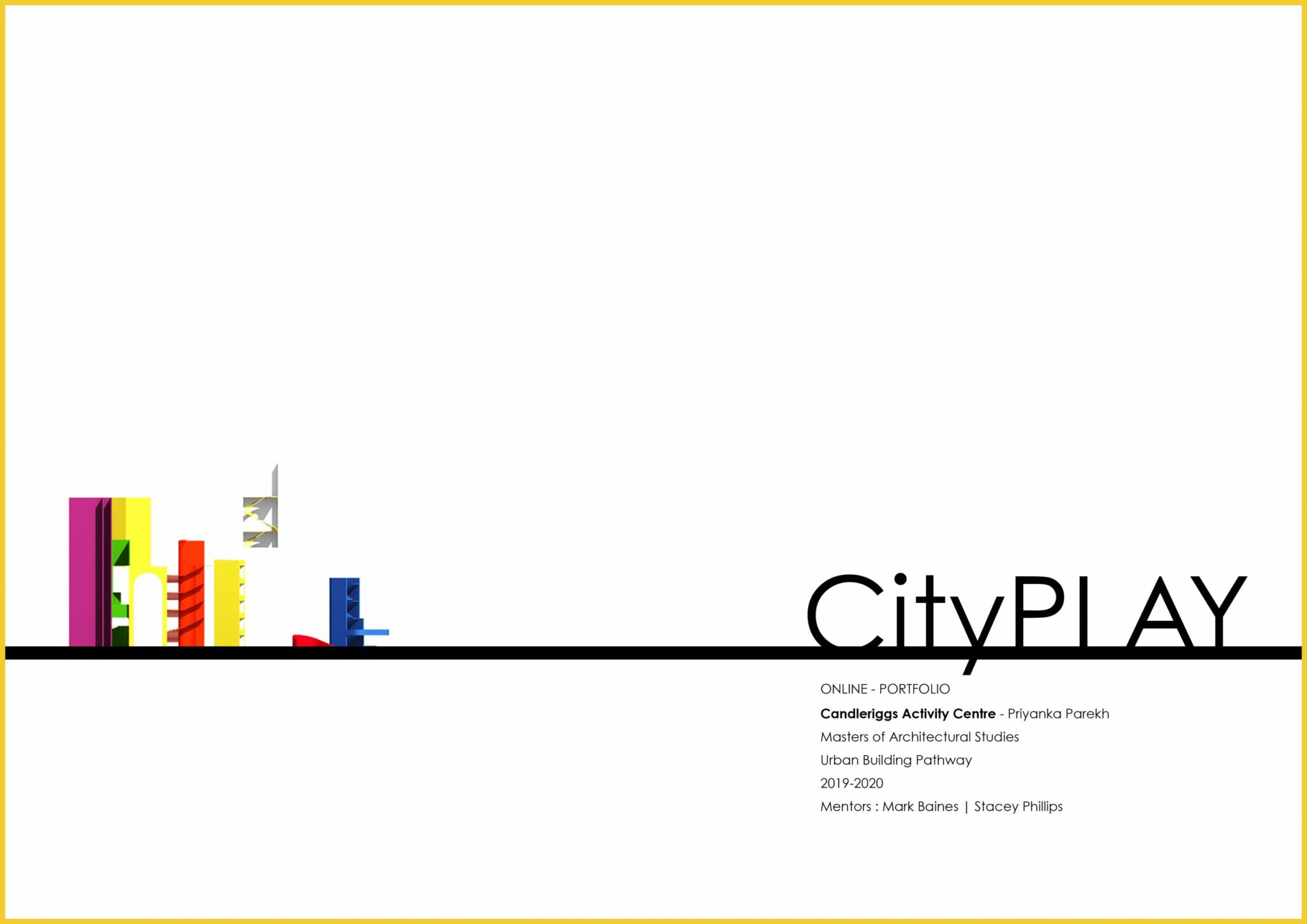 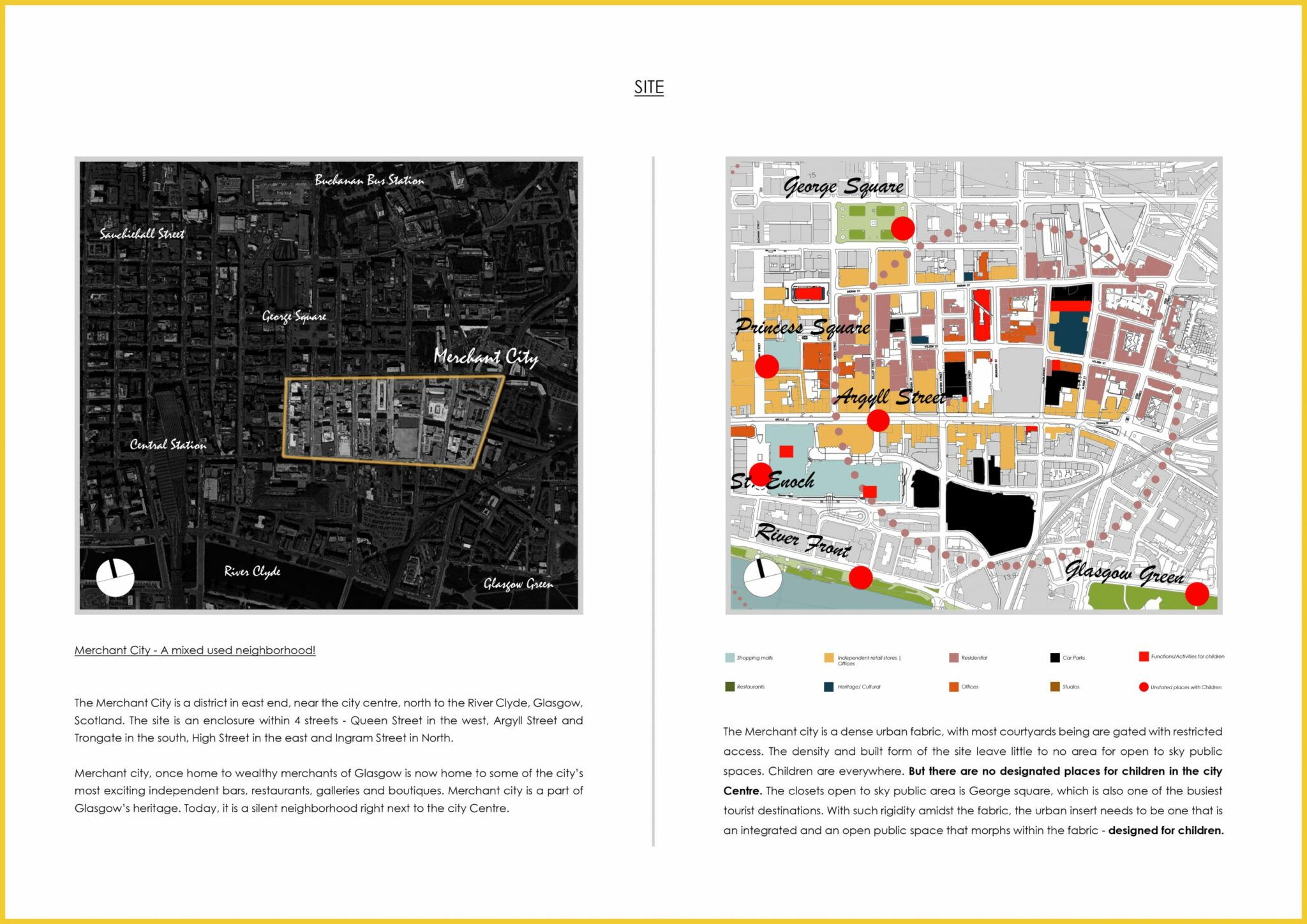 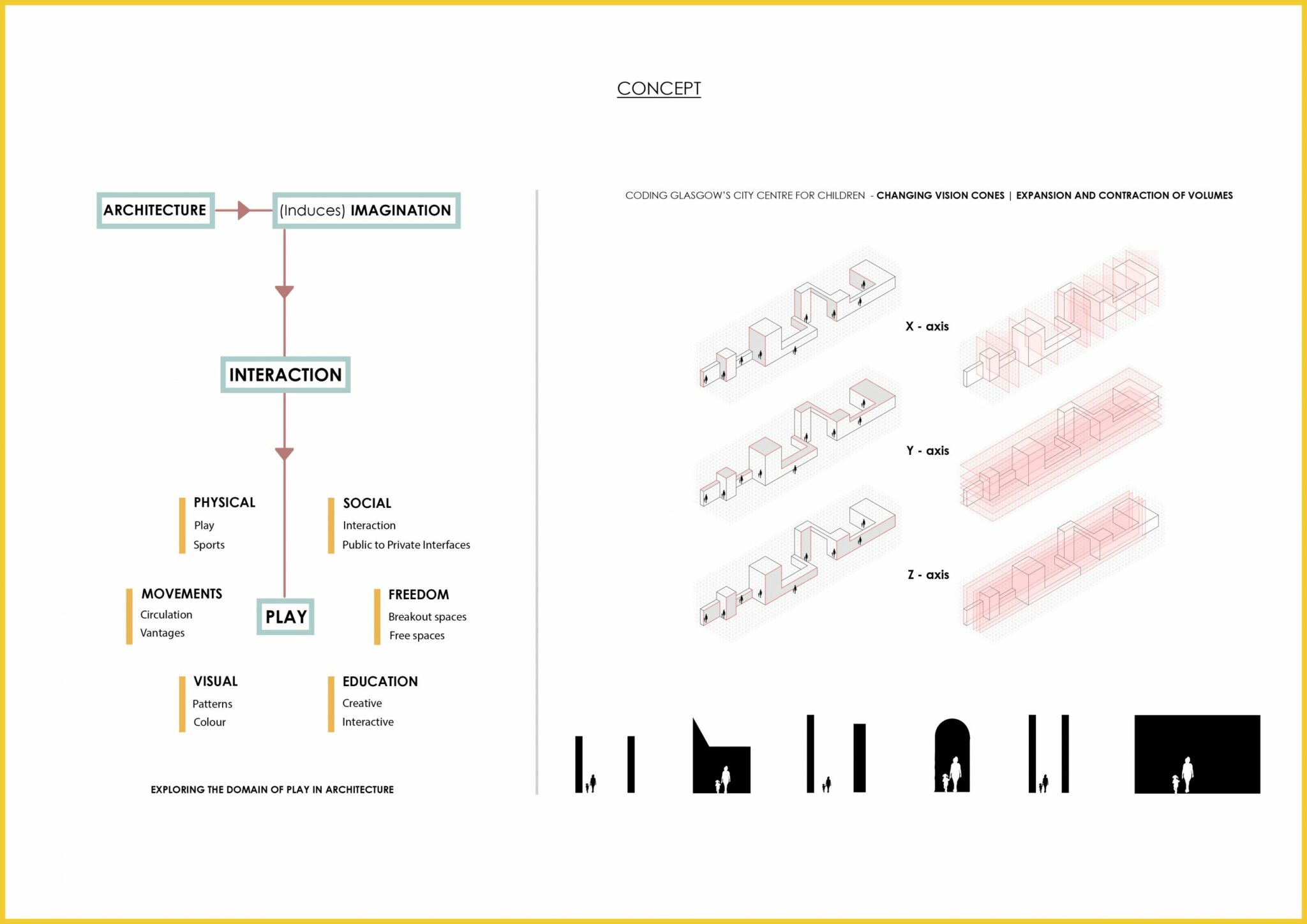 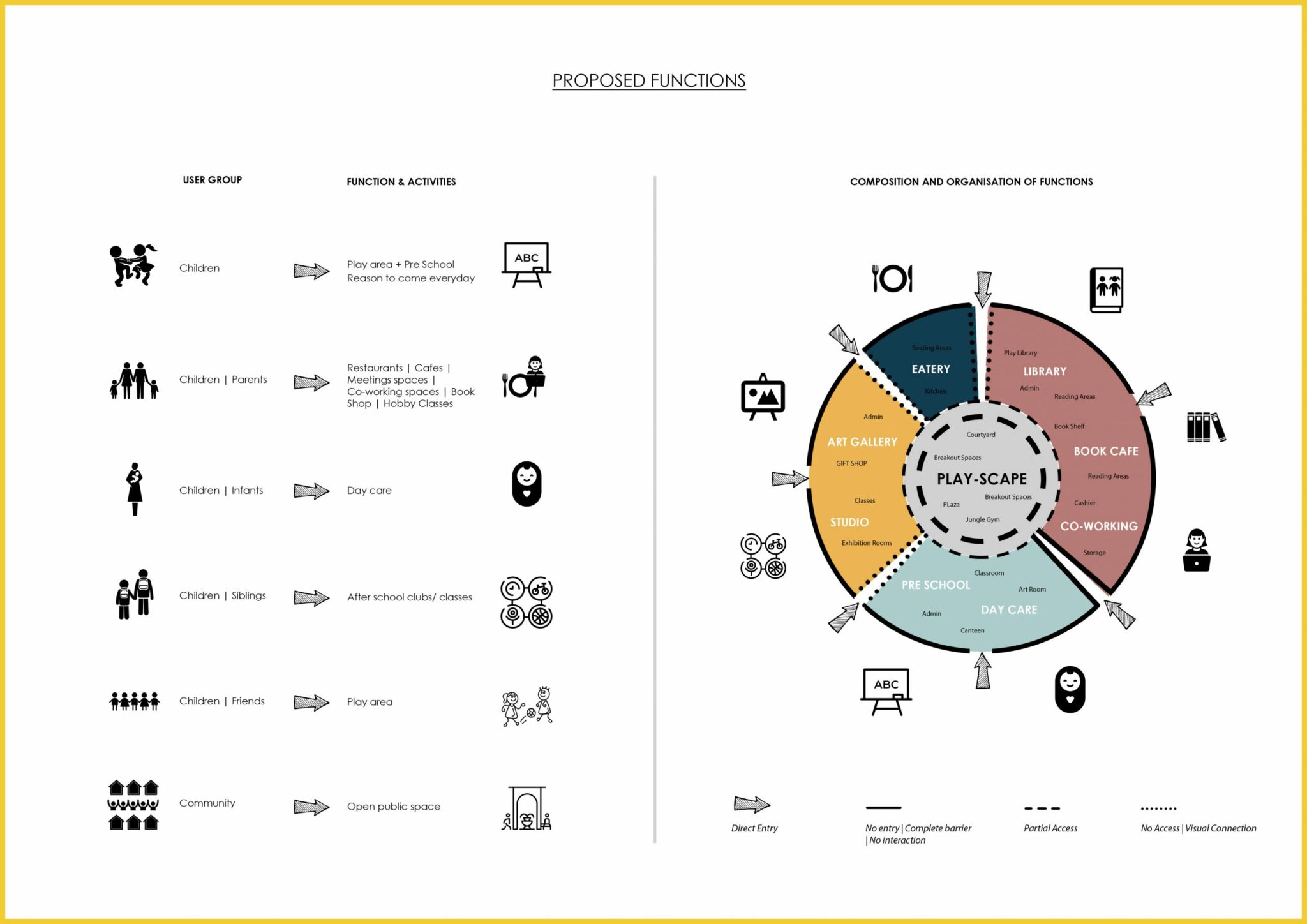 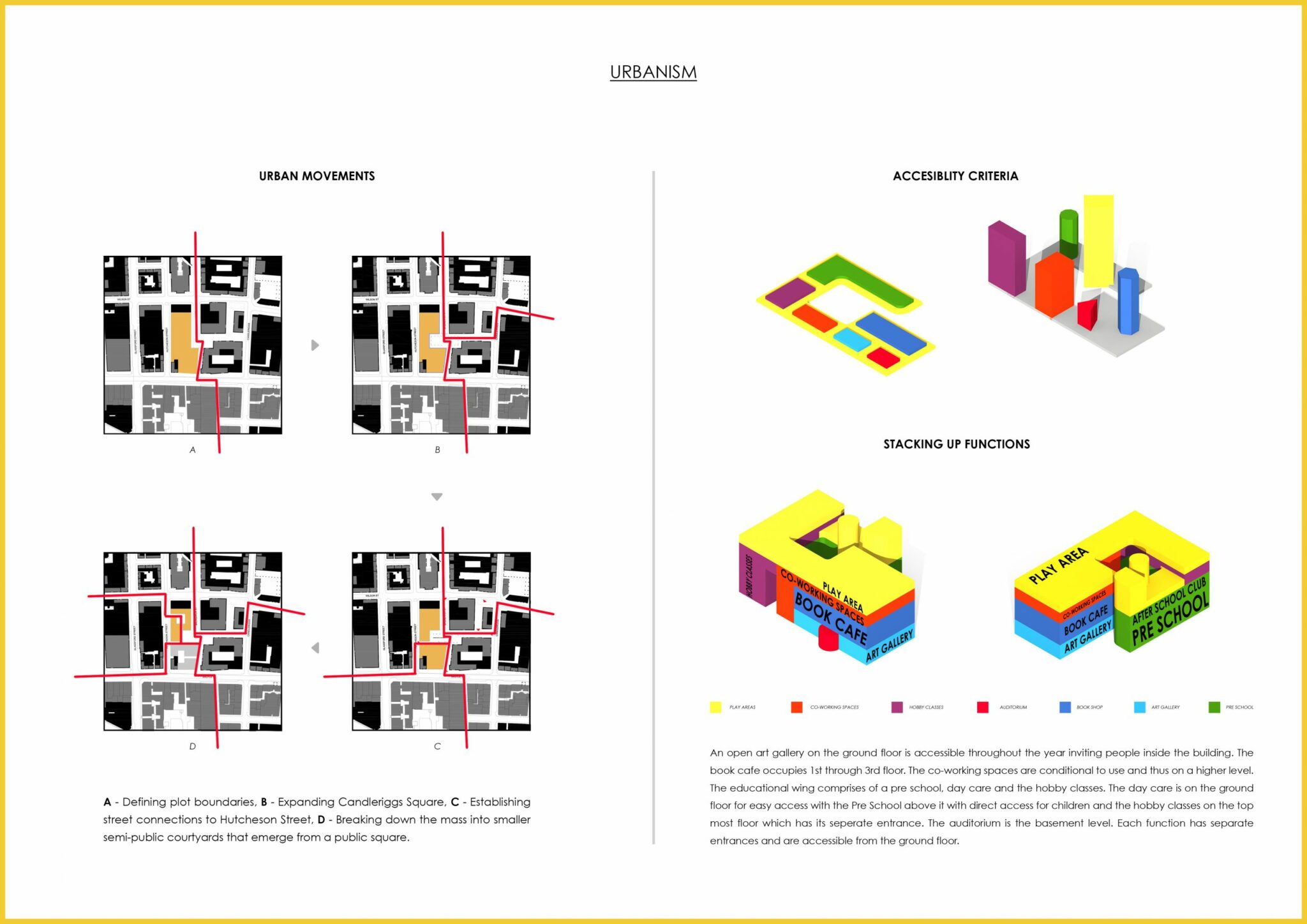 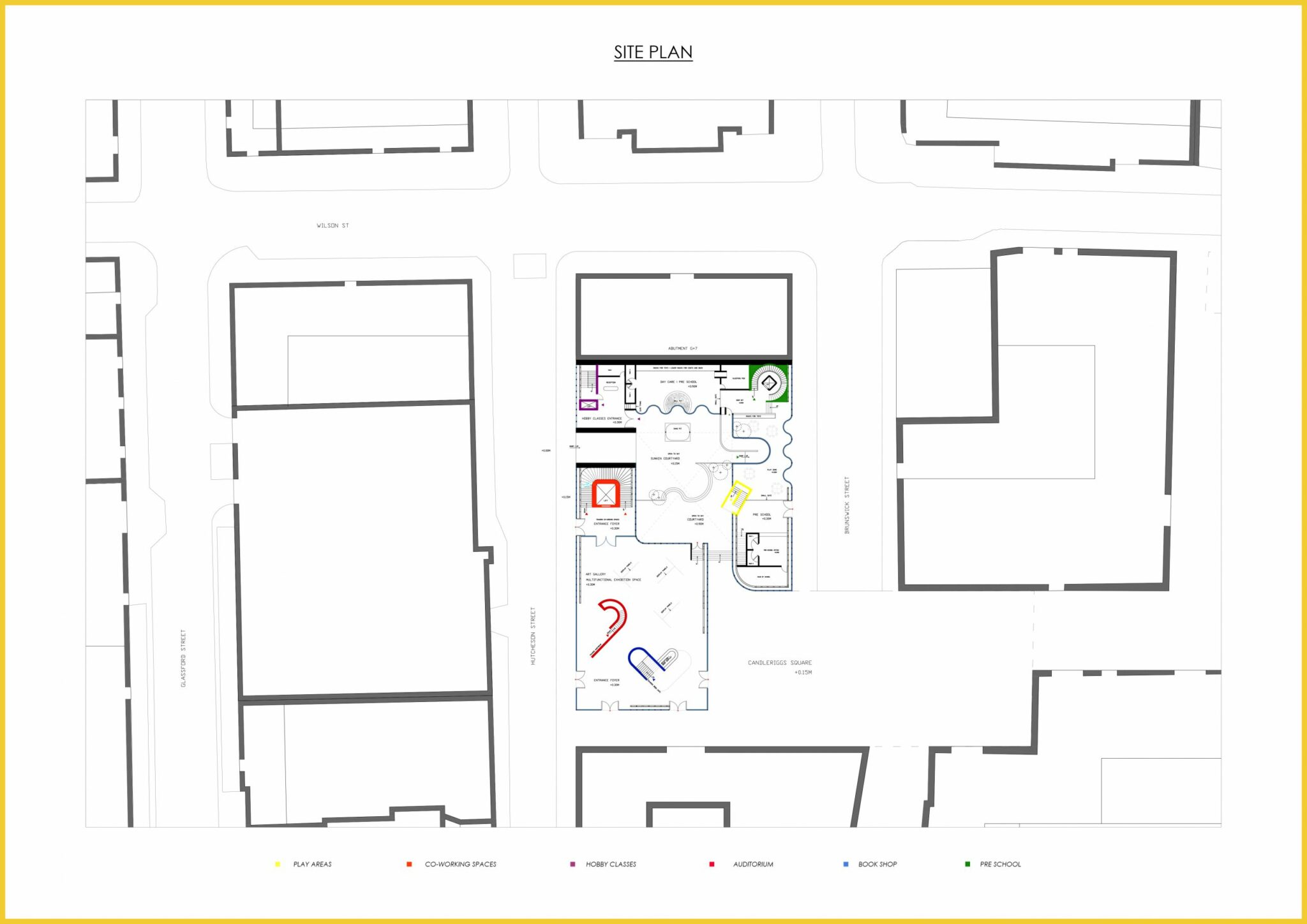 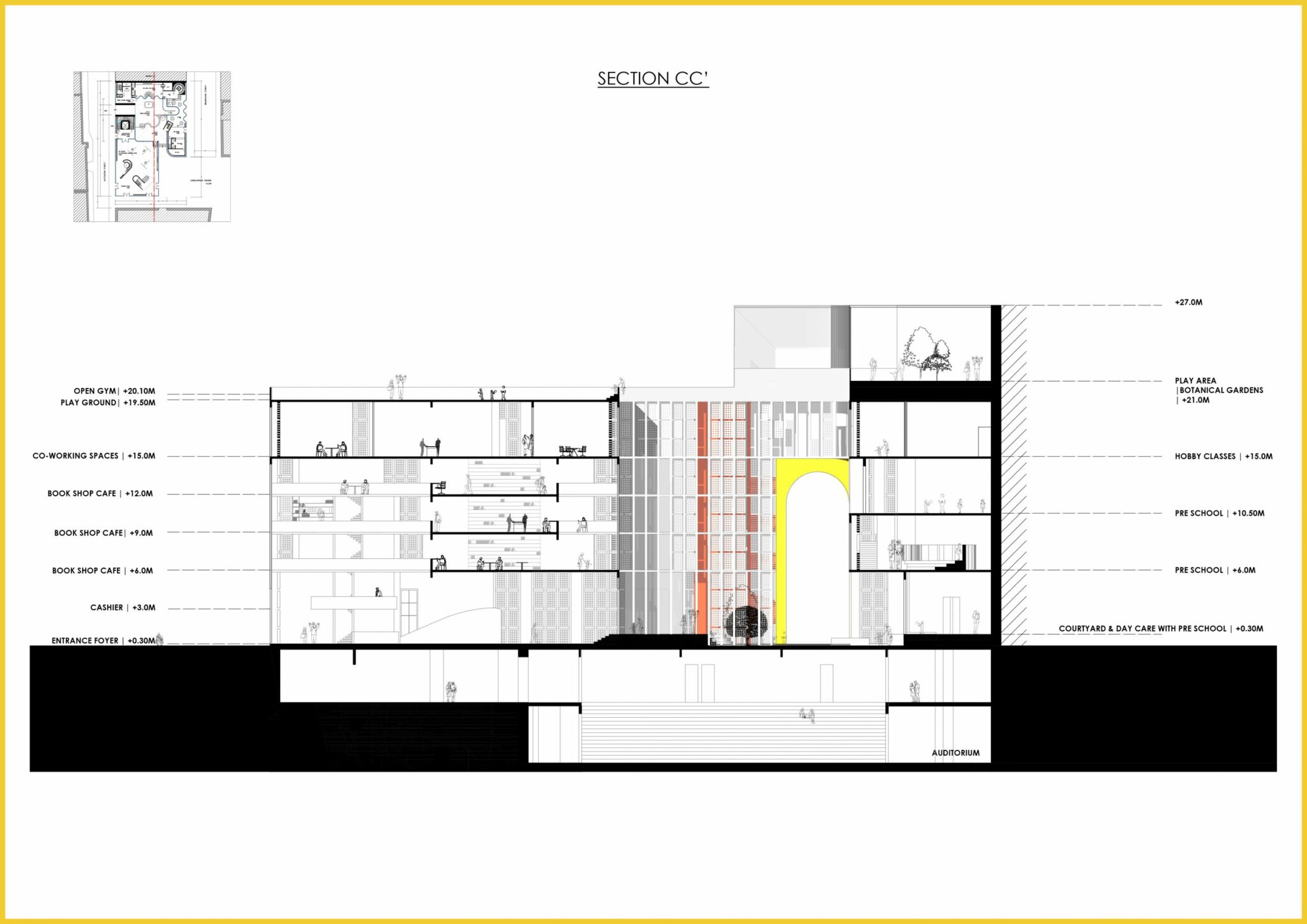 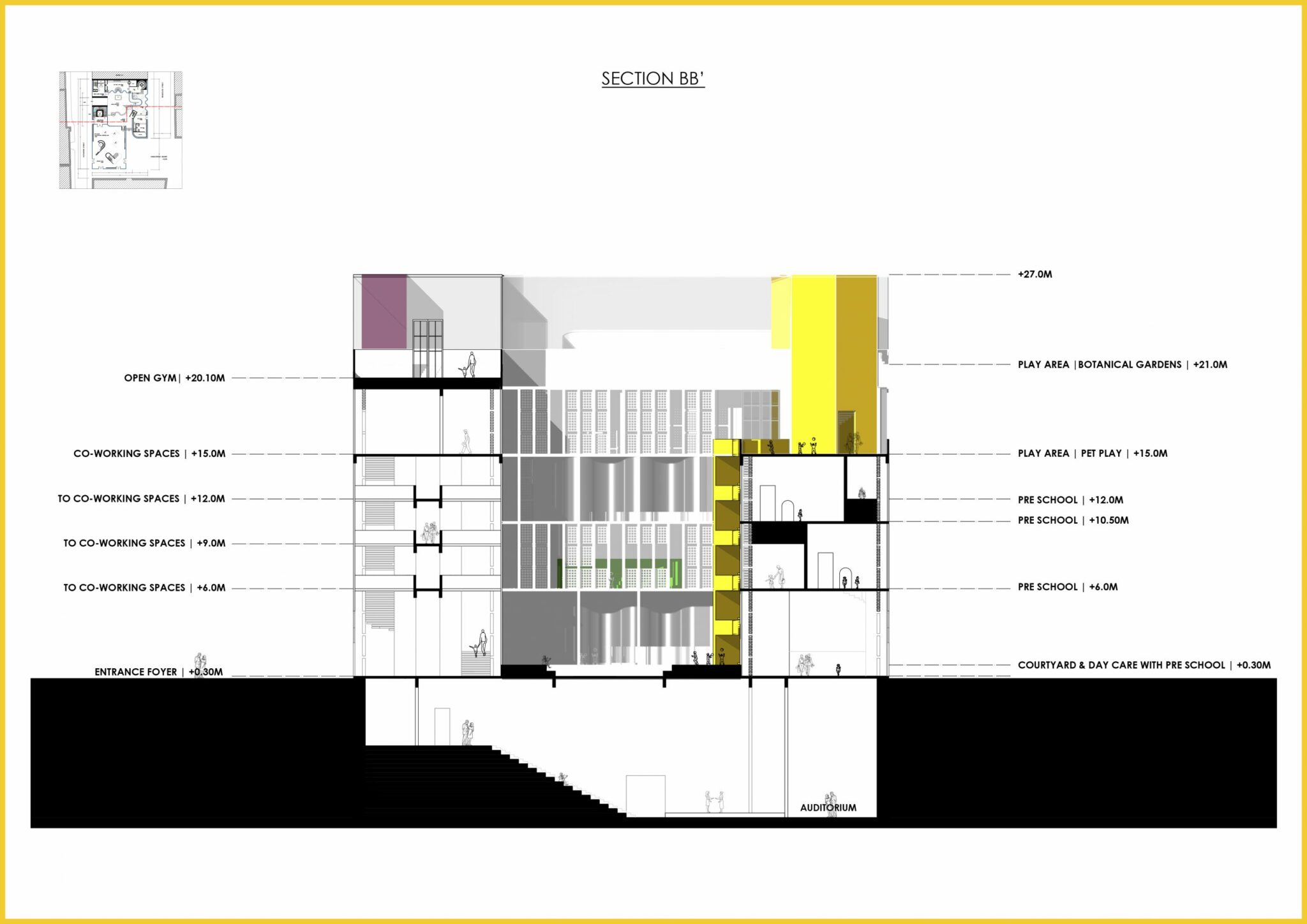 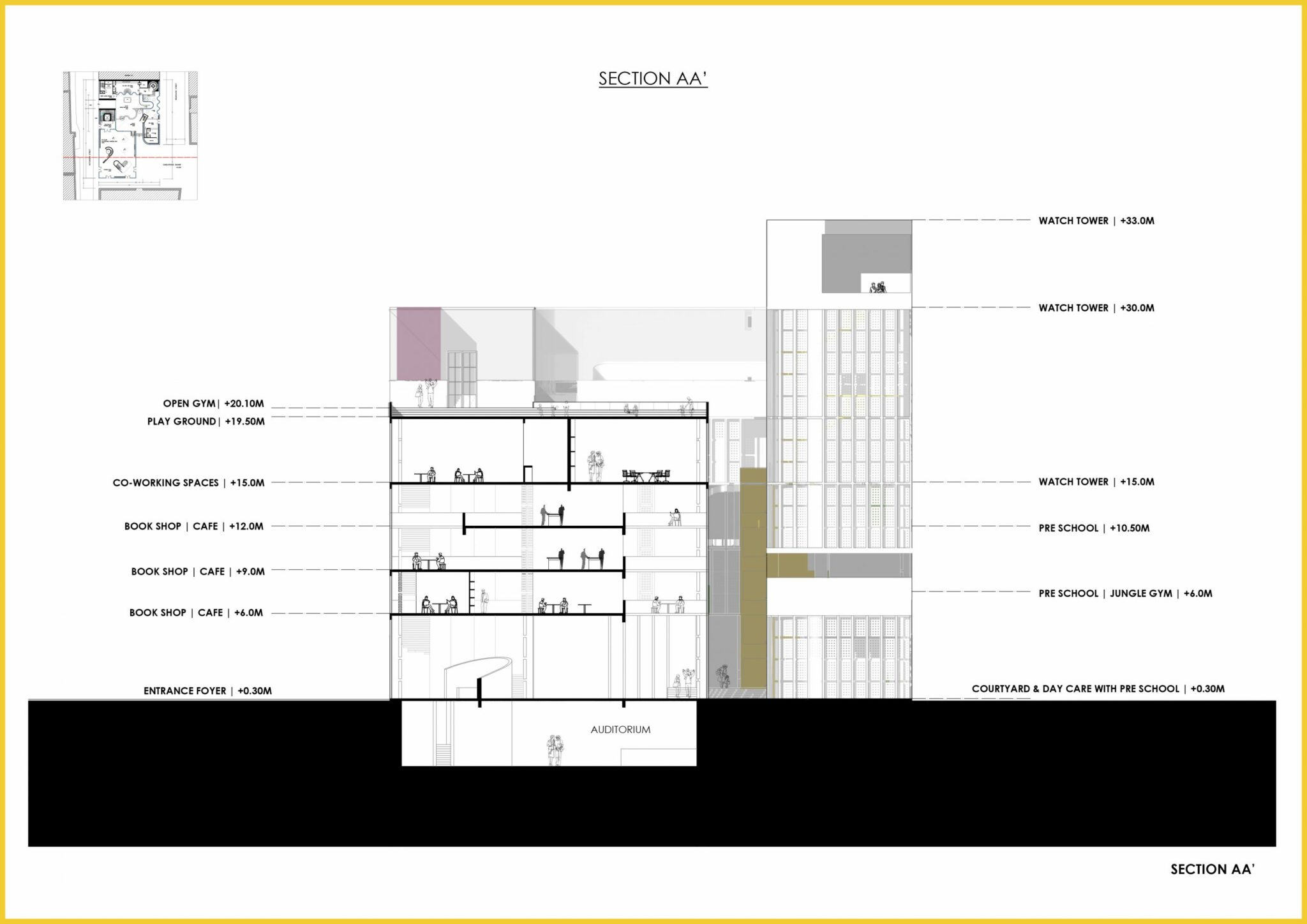 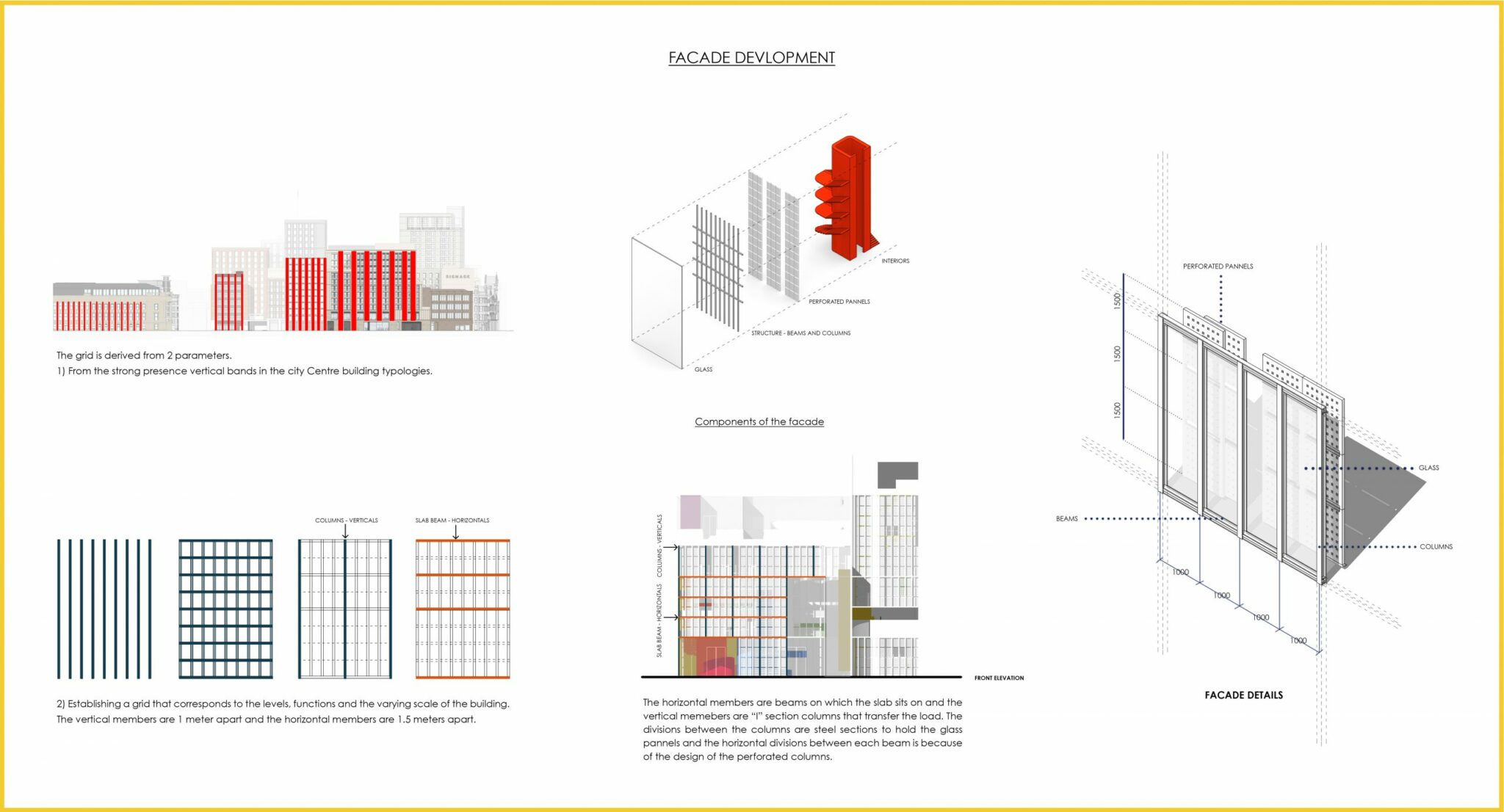 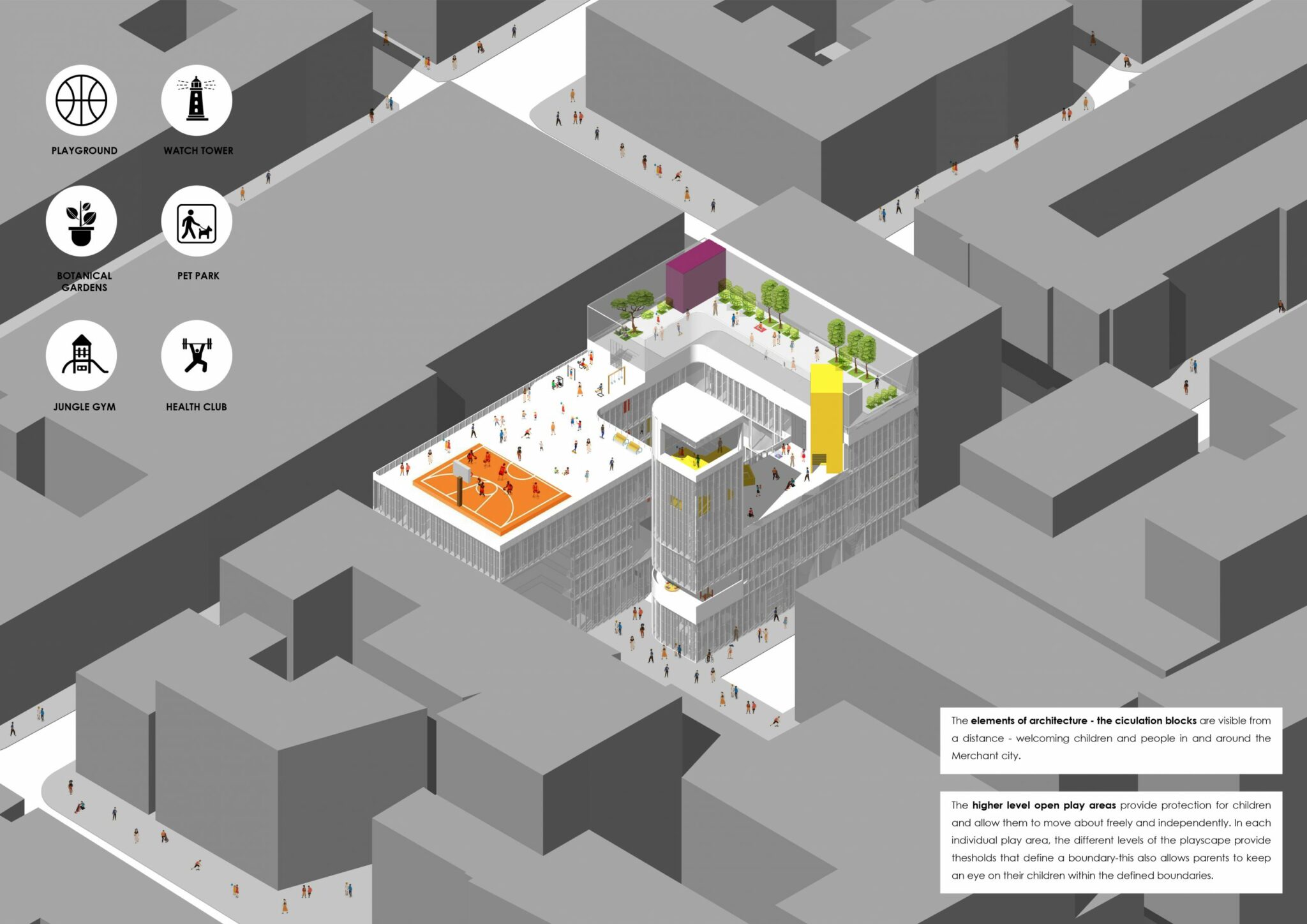