The ‘Other’ Playground: An Interactive and Heterotopic Right to the City

This project speculates about the exercise of the public’s right to play in the city through an interactive three-dimensional design proposal. Developed out of a rich understanding of the host space, the project combines the ideas of community gardens and sculptural playgrounds, to convert a previously in-between, overlooked or interstitial space in Glasgow into a site of rich cultural activity.

Through embodied experiences of play, the design aims to engage and stimulate an interaction amongst the local population and the site; improving and enhancing the relationships between the body and the urban fabric, whilst giving the users a voice to celebrate their own imagination and creativity.

Based in Possilpark, the project takes advantage of growth opportunities and embraces innovative ways of working to develop a model for finding sustainable, attractive and economically viable ways to re-engage interest in lost and forgotten civic spaces. Until around 1870 Possilpark was no more than a mansion house and home farm with few residents.

Since the 1950’s Glasgow, as with many cities across Scotland, has seen the demise of its industrial sector. The inter and post-war period was the most traumatic for the industries and although Glasgow clung onto being the “workshop of the Empire”, by the 1990s most of the engine shops were derelict and the shipyards reduced to wasteland. The most rapid deindustrialization took place during the 1970s and 1980s, with many of the traditional industries drastically shrunk or completely closed down. Although many initiatives promised revival, a shift towards a new service-oriented economy emerged to replace traditional heavy industries. This left many Scottish cities peppered with derelict spaces and industrial wastelands.

Possilpark was unable to avoid this pattern of urban decay, and today 100% of residents live within 500m of vacant or derelict land. The district is also one of Scotland’s most deprived areas with 15% undeployed.

The site is located on the intersection of Allander St and Barloch St in Possilpark.

Previously supporting the east corner of a tenement block, demolished in 1970, the stalled space currently functions as a car park.

Along with the scale and derelict condition of the space, which provided a huge canvas for the project, the fundamental reasons for choosing the site was its location in Possilpark and the area’s social demographic context. At the epicentre of one of Glasgow’s poorest neighbourhoods and running parallel to Saracen Highstreet, the site provided the opportunity to benefit an extremely diverse and deprived community.

The site, as with many streets throughout Possilpark, had become an avenue of anonymity, rather than a place of rich culture and activity. After visiting the site and talking to local residents it became apparent the traditional sense of a community had broken down. The increased transience of people in and out of Possilpark had developed a situation of people living in close quarters to each other but operating very isolated and separate lives. This ultimately breeds fear, contempt and frustration, bringing on a sense of alienation and powerlessness within the community.

This observation drove the development of a community based, public spaces project. These spaces are important assets to the urban fabric, providing people with opportunities to come together and engage with the community. When successful they can become a ‘self-organising public service’ for everyone in the society to participate in, learn from and to help create local attachments.

In Topographies of Contemporary Architecture Ignasi de Solà-Morales says architecture has gone silent. However, have we in fact just become deaf to the spaces around us through a lack of interaction and embodied experiences of play?

Relying less on visual stimulation and targeting a wider range of sensory stimuli the proposal shows how adding something new and enhancing the existing can positively change the way we experience and interact with the built environment.

The visuals explore the finer details of the design, whilst showing the inhabited capacity and tactile nature of the space from four different perspectives. To represent the demographic of people in Possilpark the images are populated with a range of figures, of varying heights, body shapes and abilities. These figures animate the design; suggesting how the space could be used and the rich variety of experiential goals the design can yield.

The project did not explore the technical details and specifications of the designed objects; how they would be made and what they would be made from, however, the visuals suggest a pallet of materials and textures which would achieve the goals of the space and design.

A conscious decision was made to crop the images and shape the field for view. Stepping away from a rectilinear frame not only avoided traditional presentation aesthetics, in line with the motifs of the project but also listened to David Hockney’s criticism of ‘traditional’ photography’s static field of view, revealed during early research into collage. Furthermore, the use of organic shapes to frame the visuals playfully focuses the attention on the designed space, drawing the eye into the centre of the space and reducing the attention given to the surrounding buildings.

After graduating from the Glasgow School of Art in 2019 with a first-class in BA (Hons) Interior Design, I am extremely proud to have completed my masters of Architectural Studies at the Mackintosh School of Architecture.

Having spent the last two summers interning at Interior Visions in Thailand and Waldo Works in London, I’m currently looking to widen my knowledge and experience within the growing discipline of design and architecture. 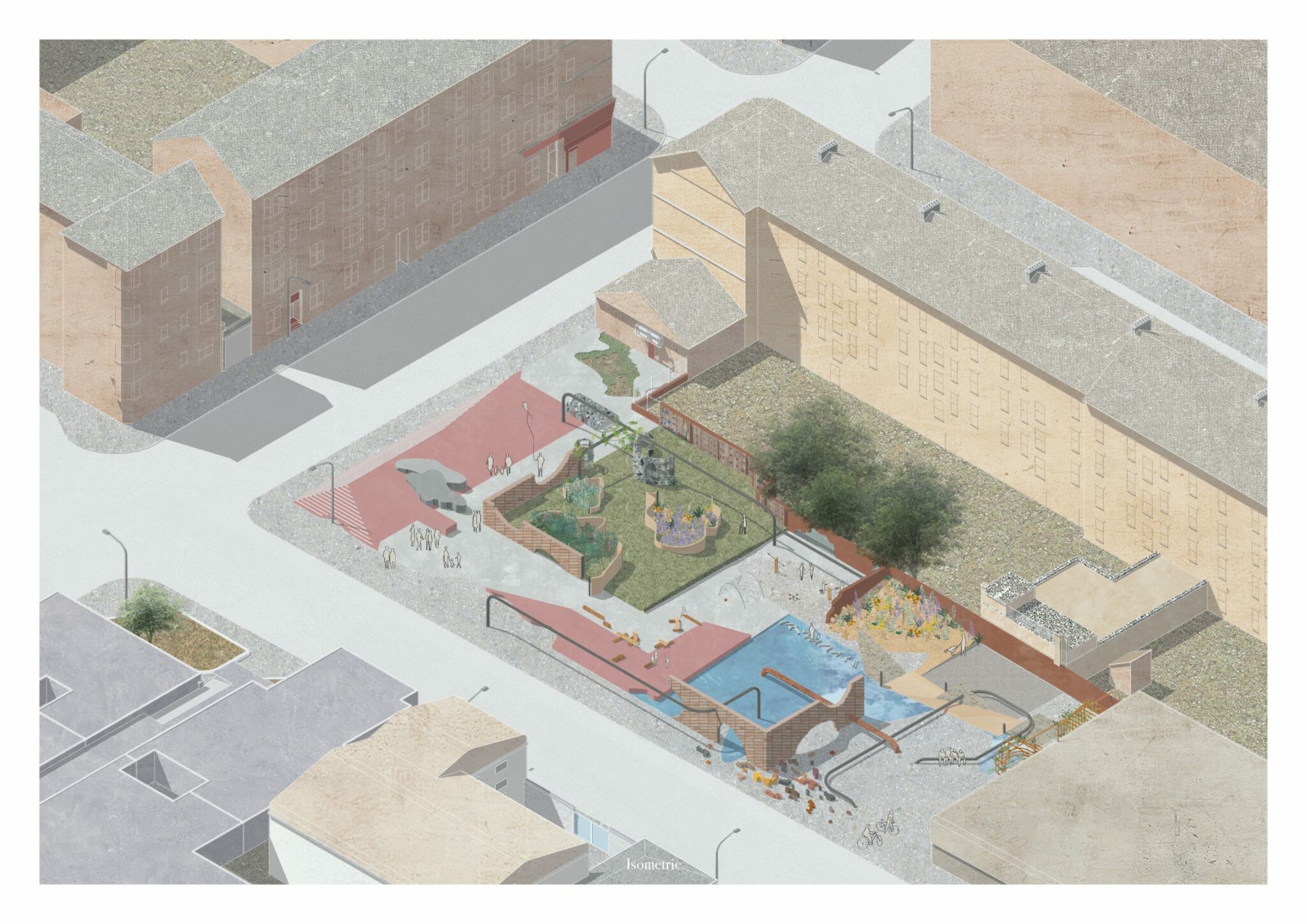 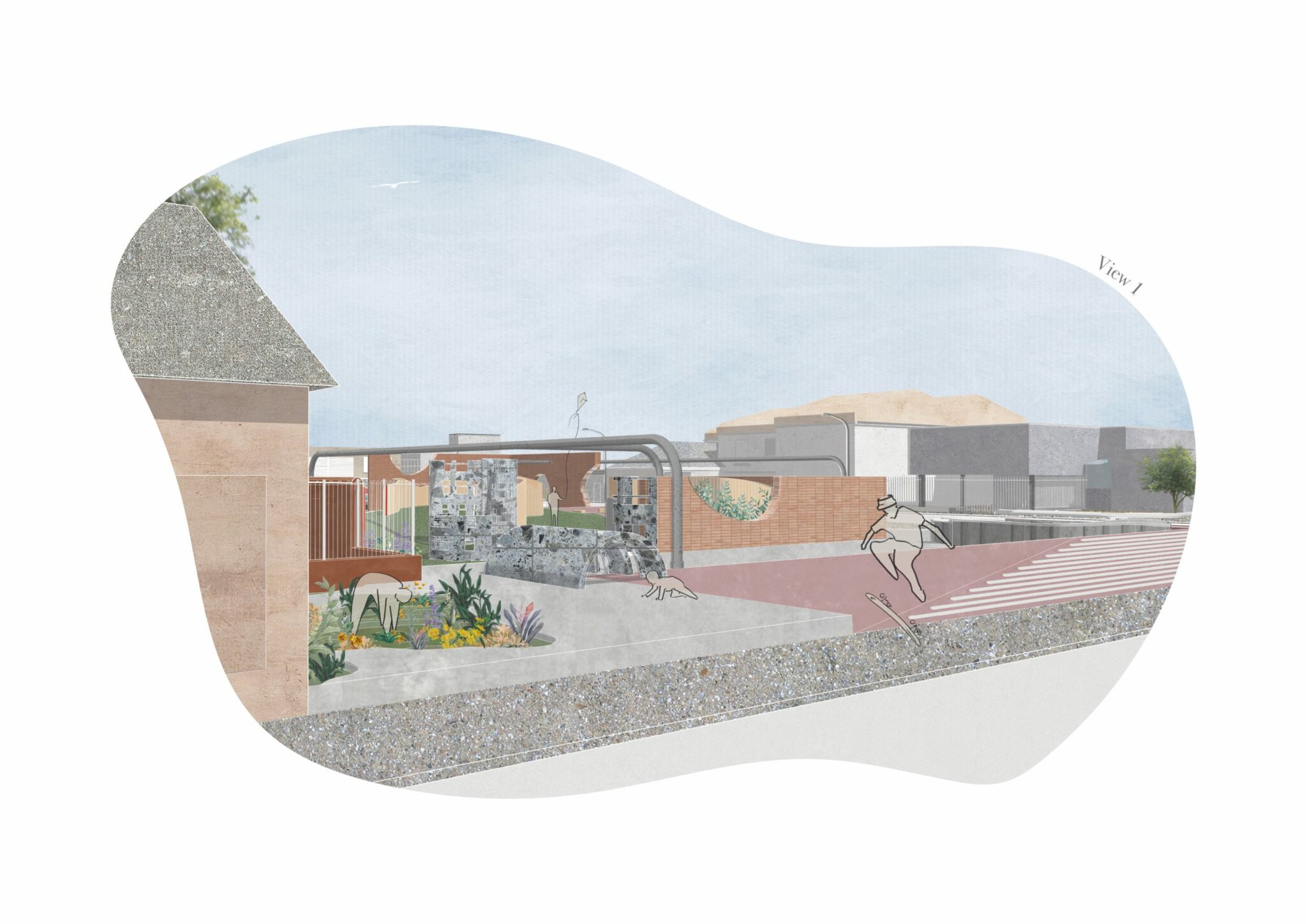 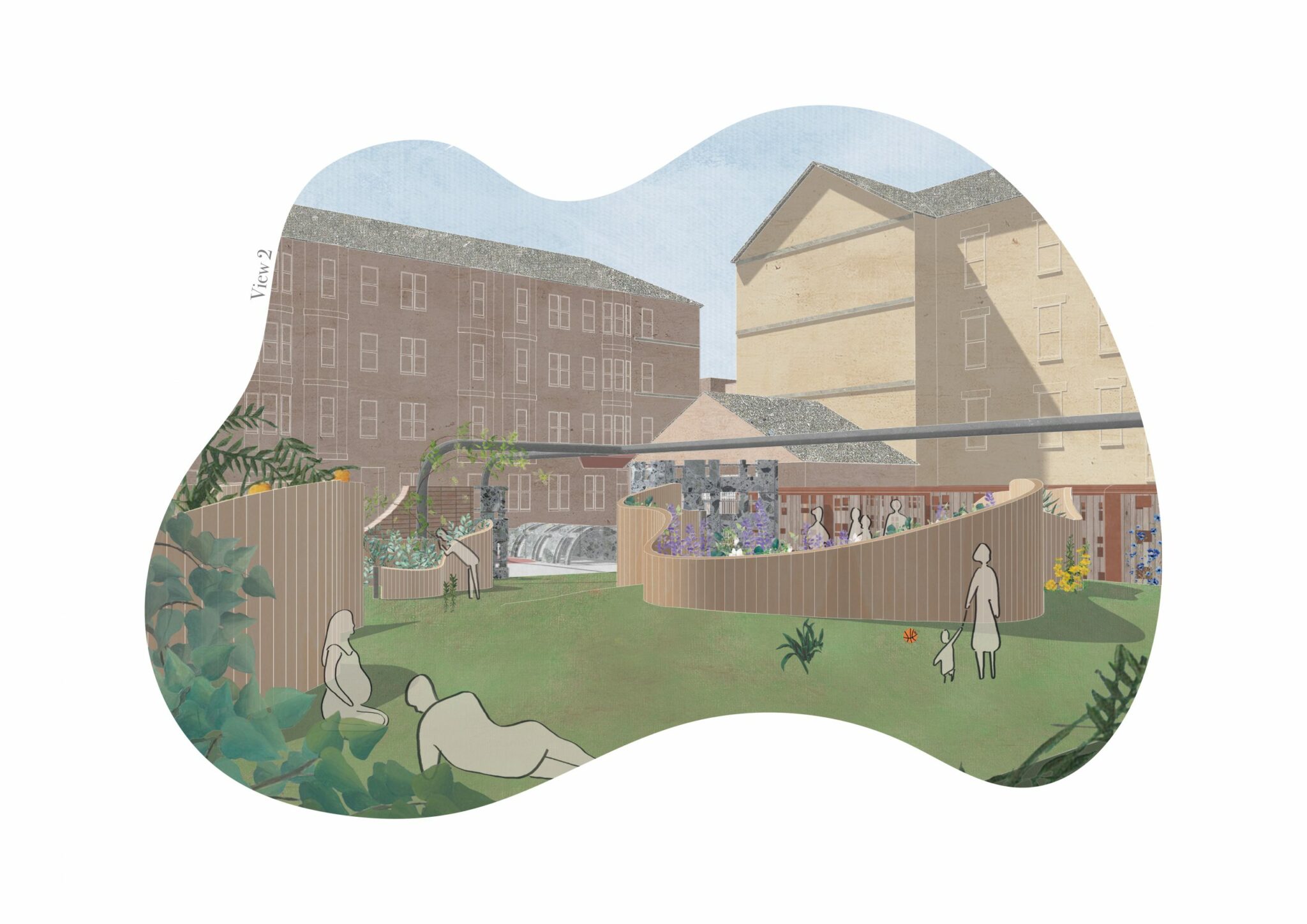 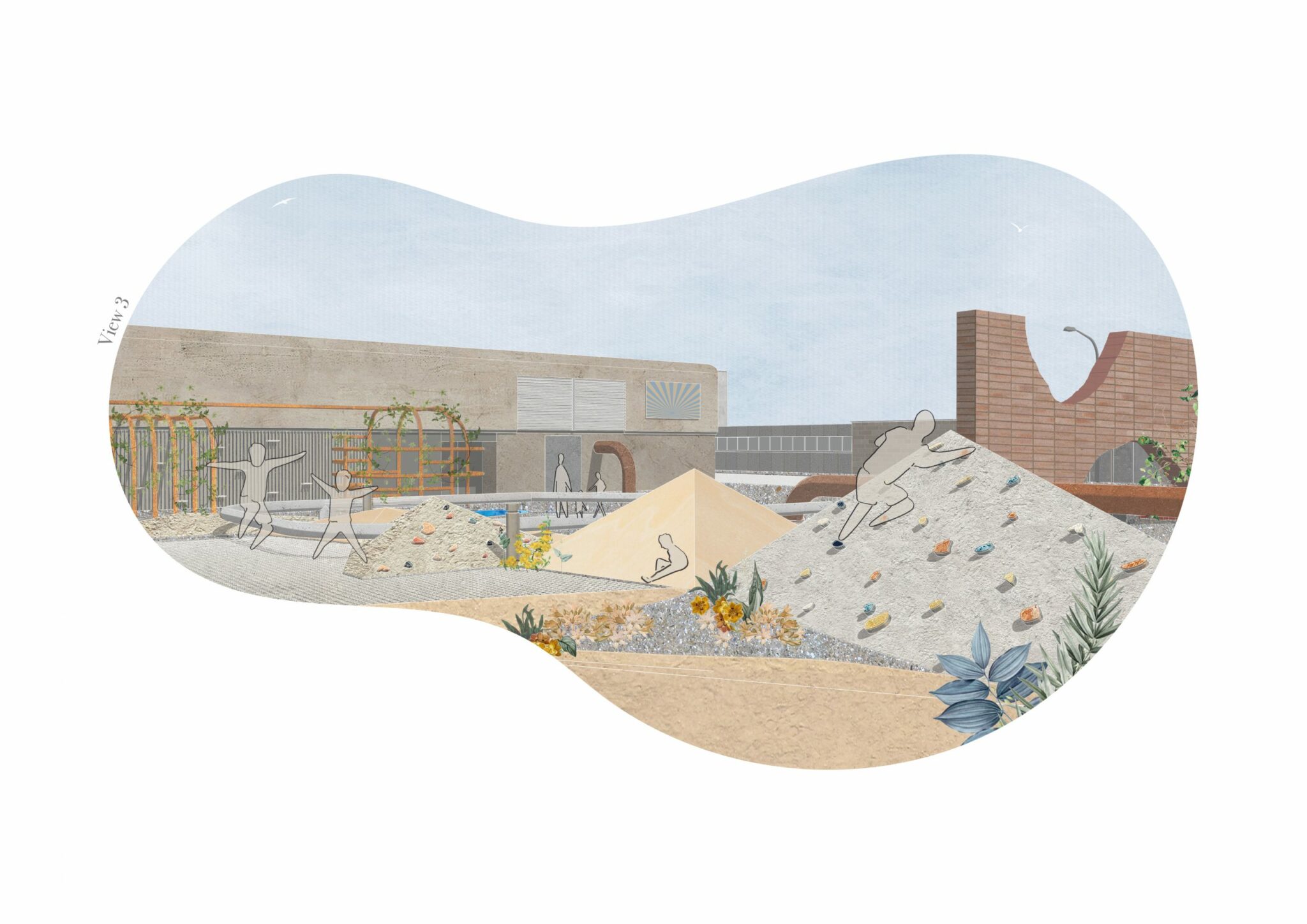 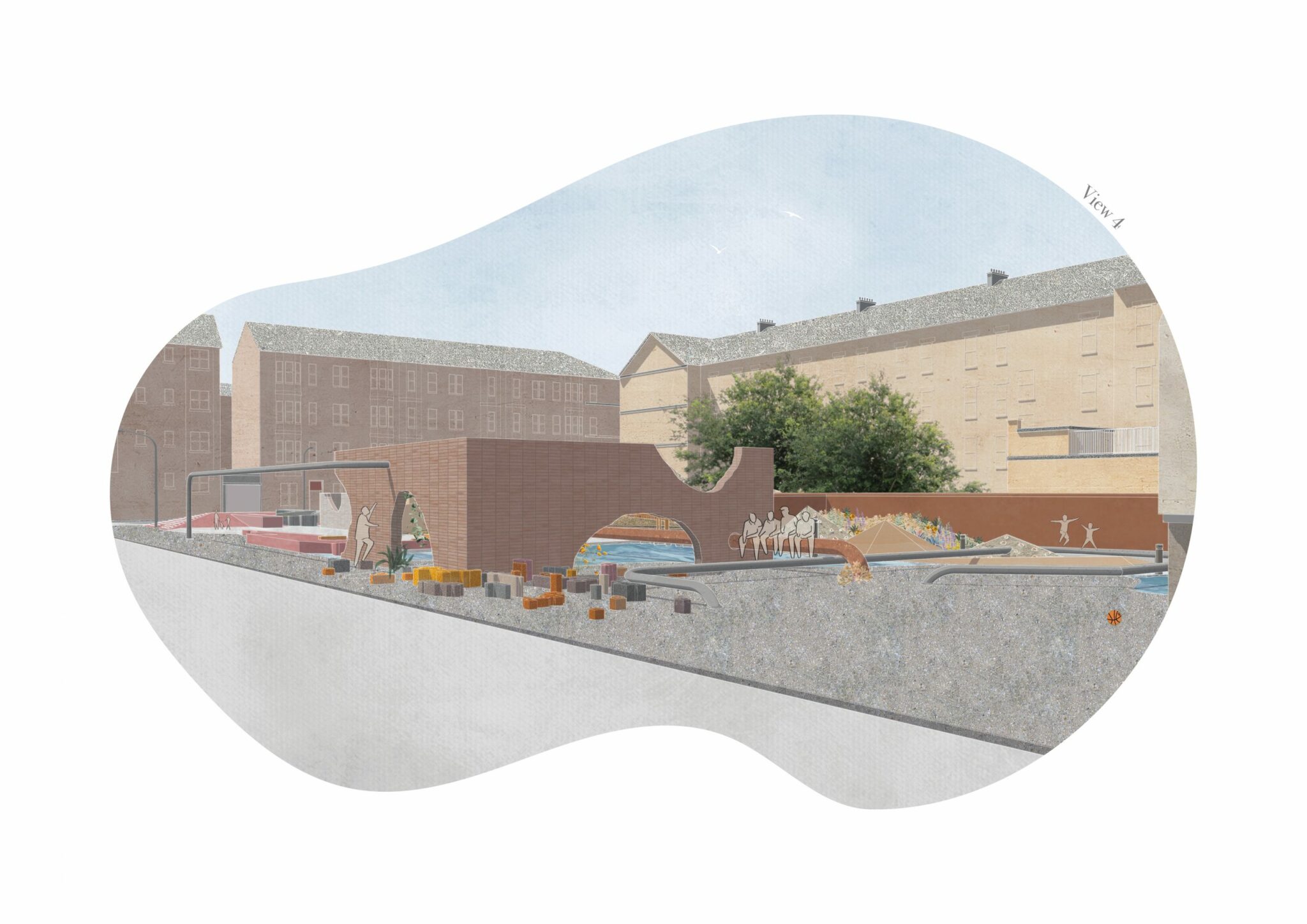 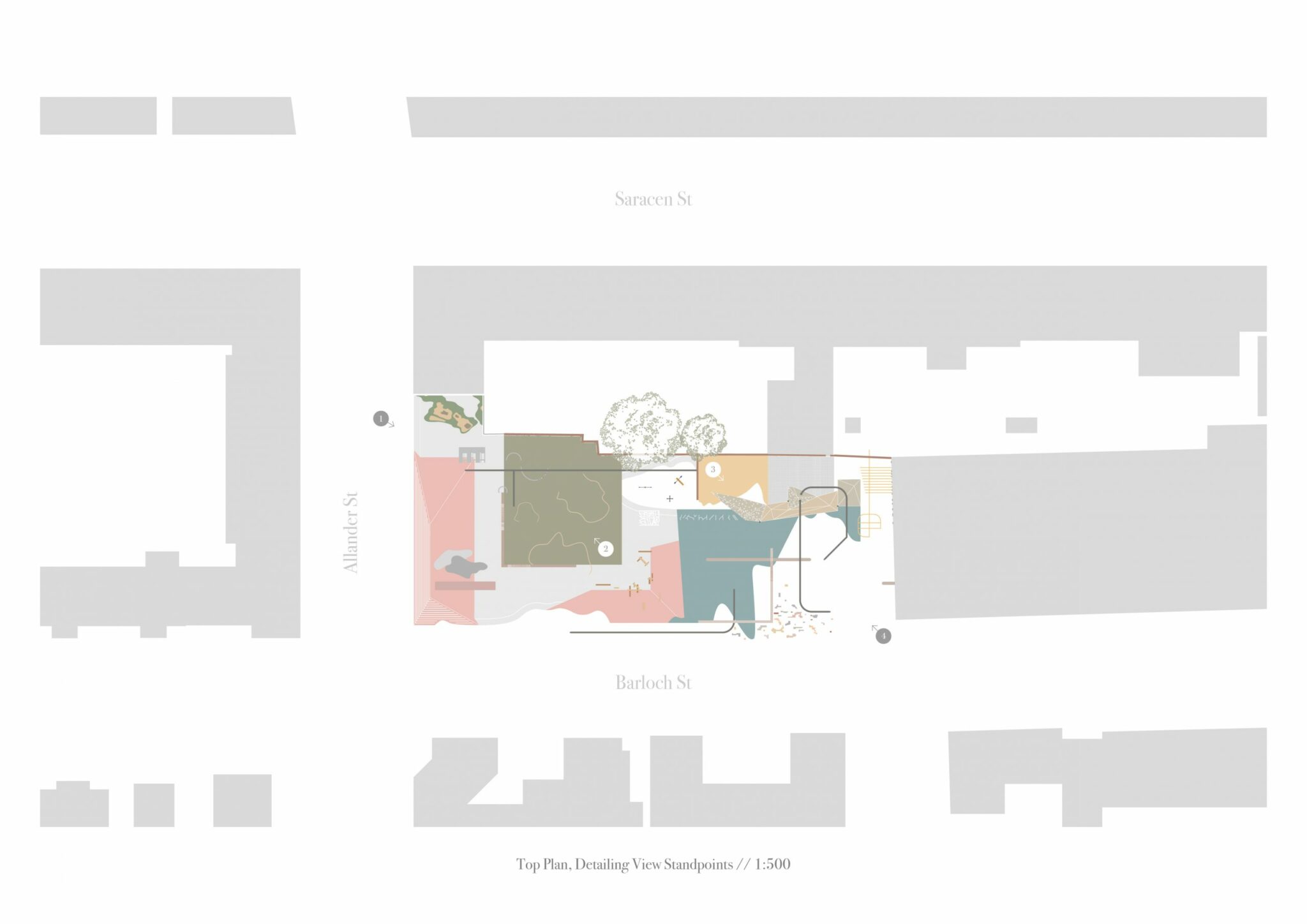 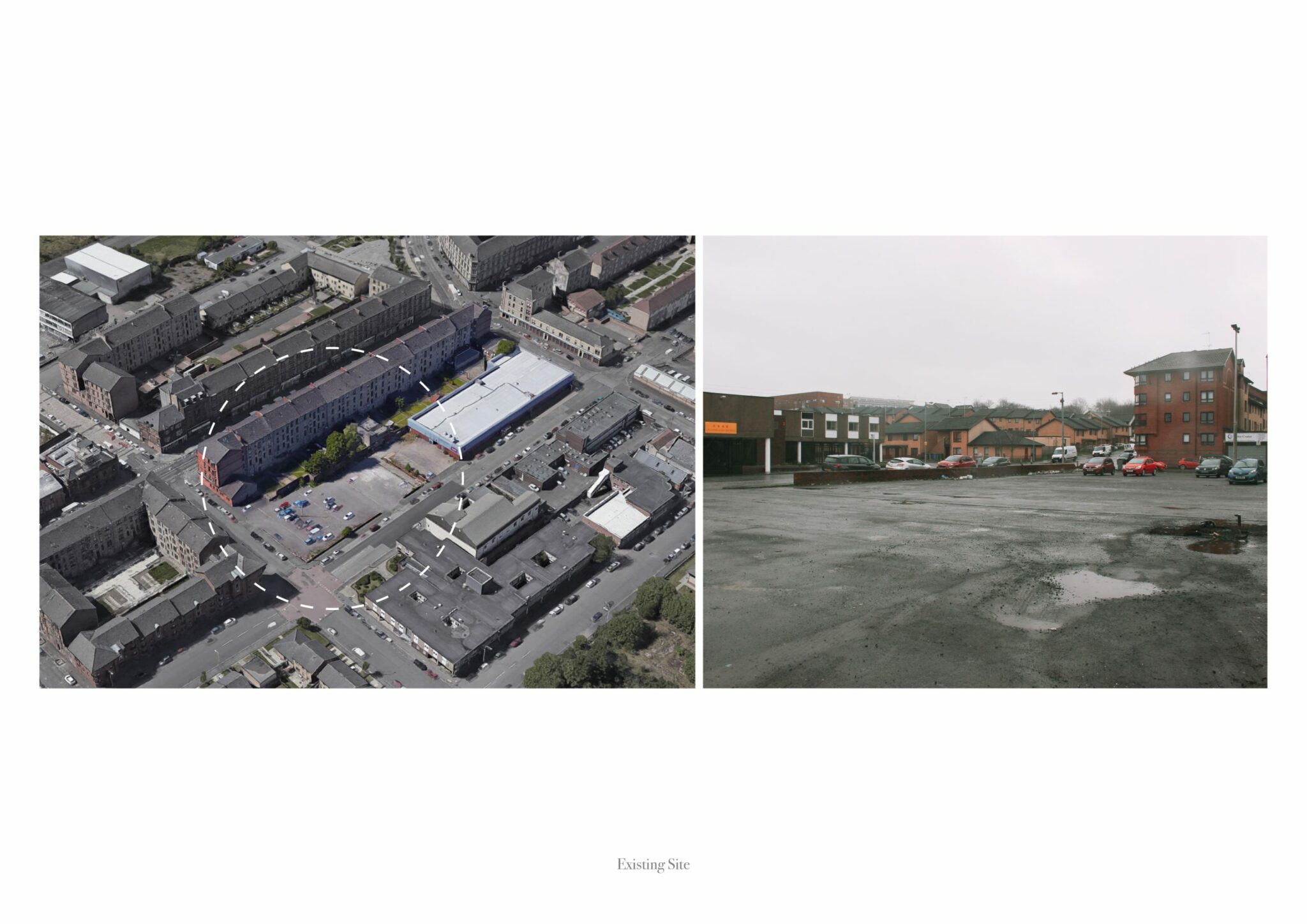 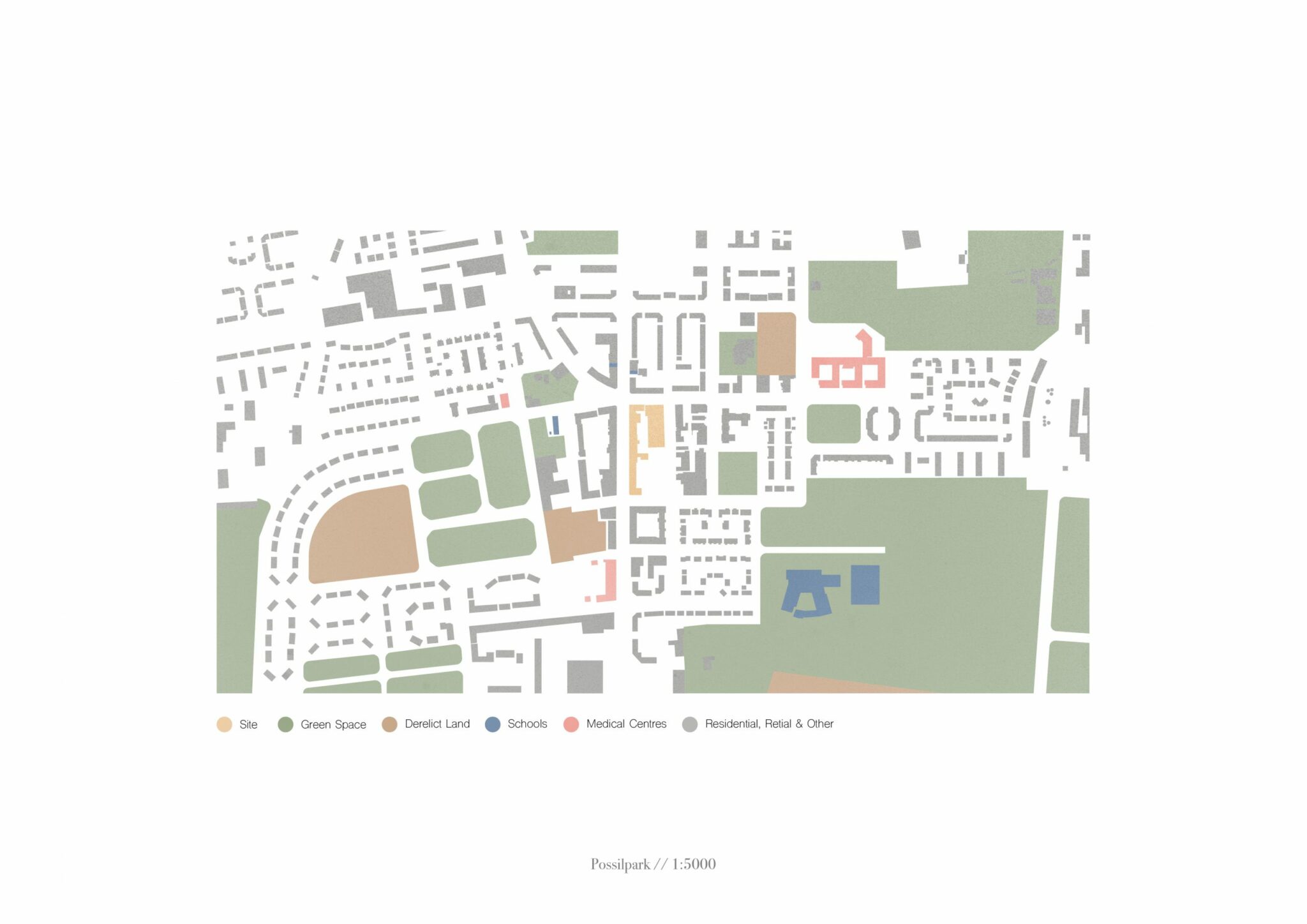 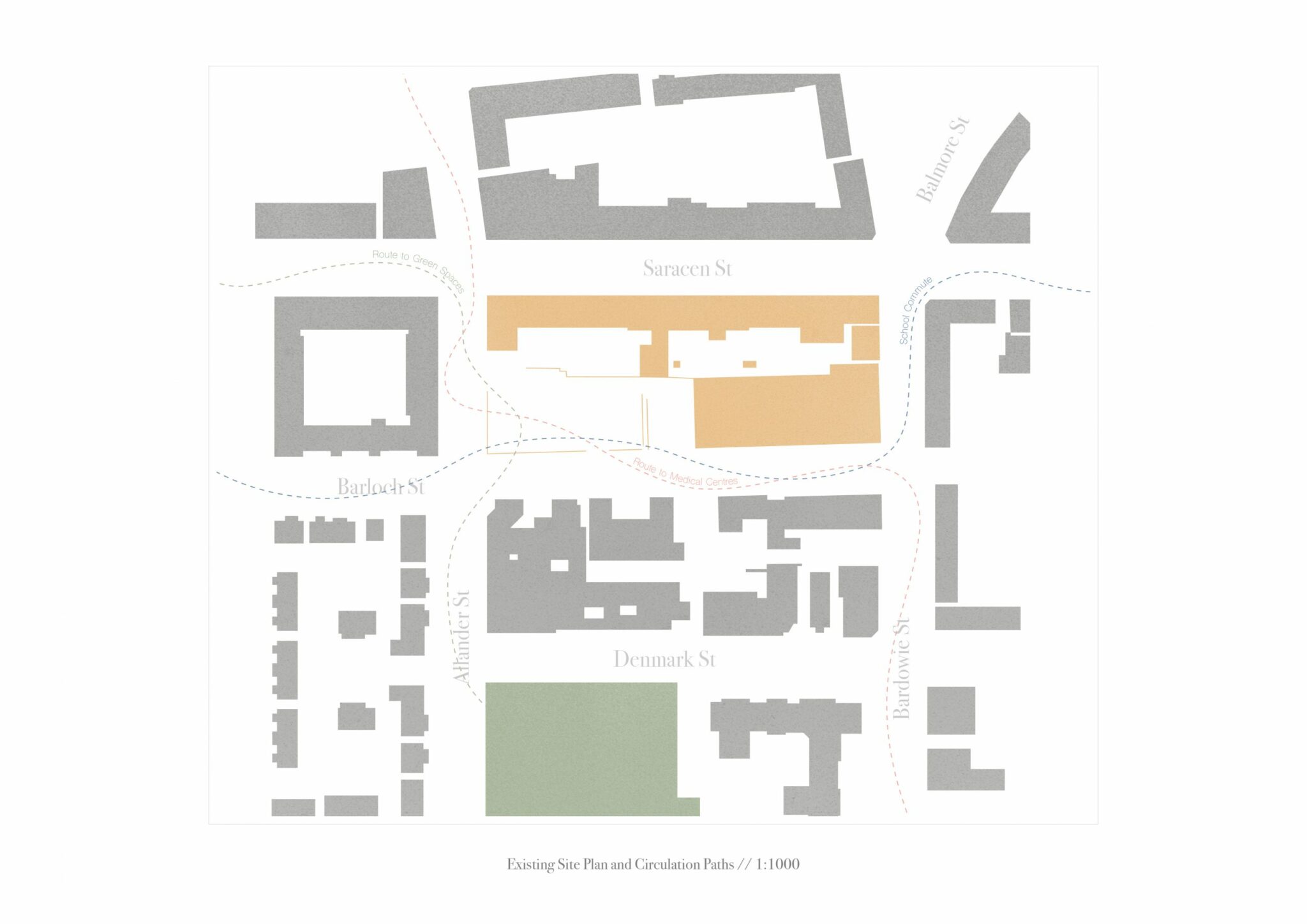 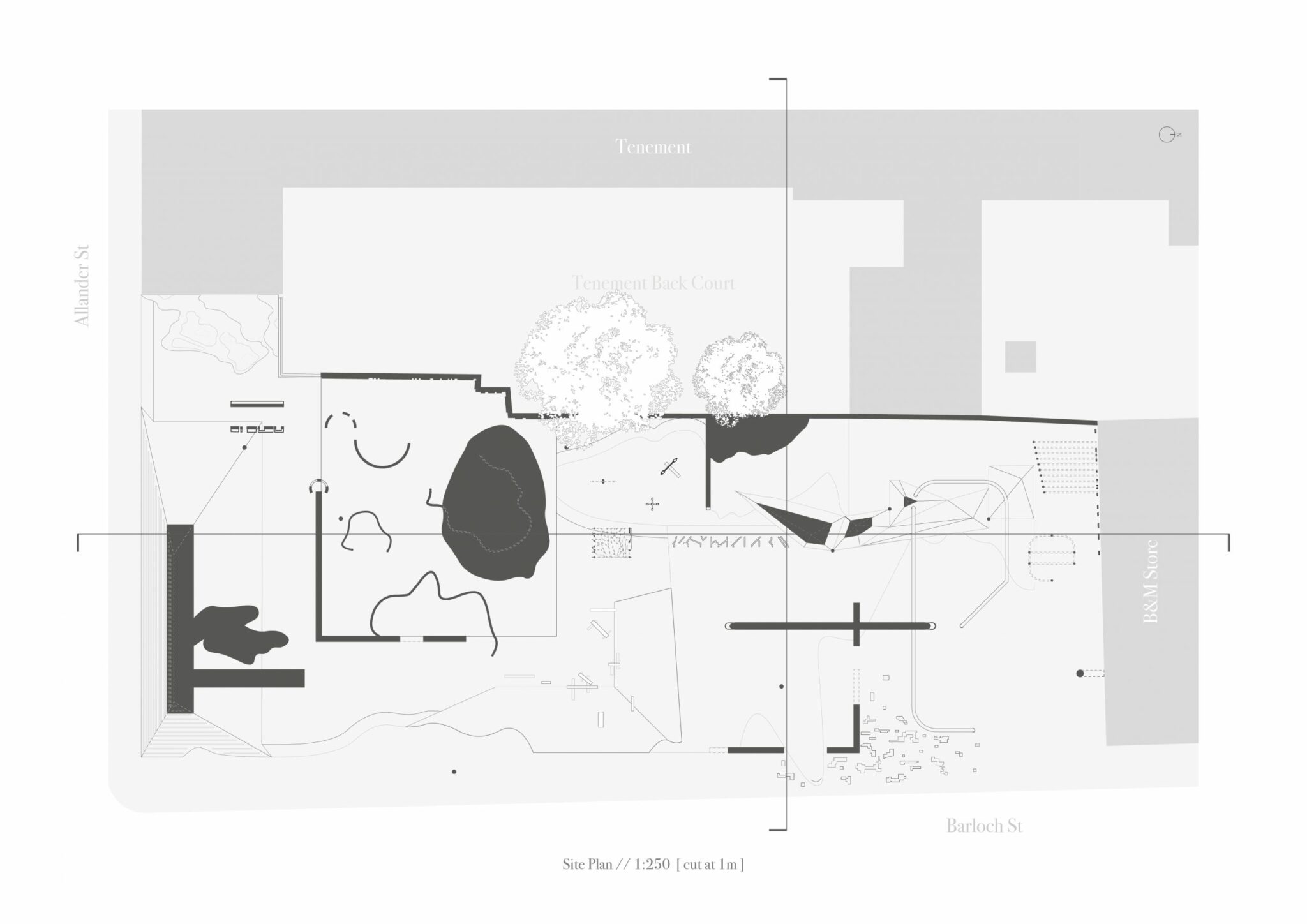 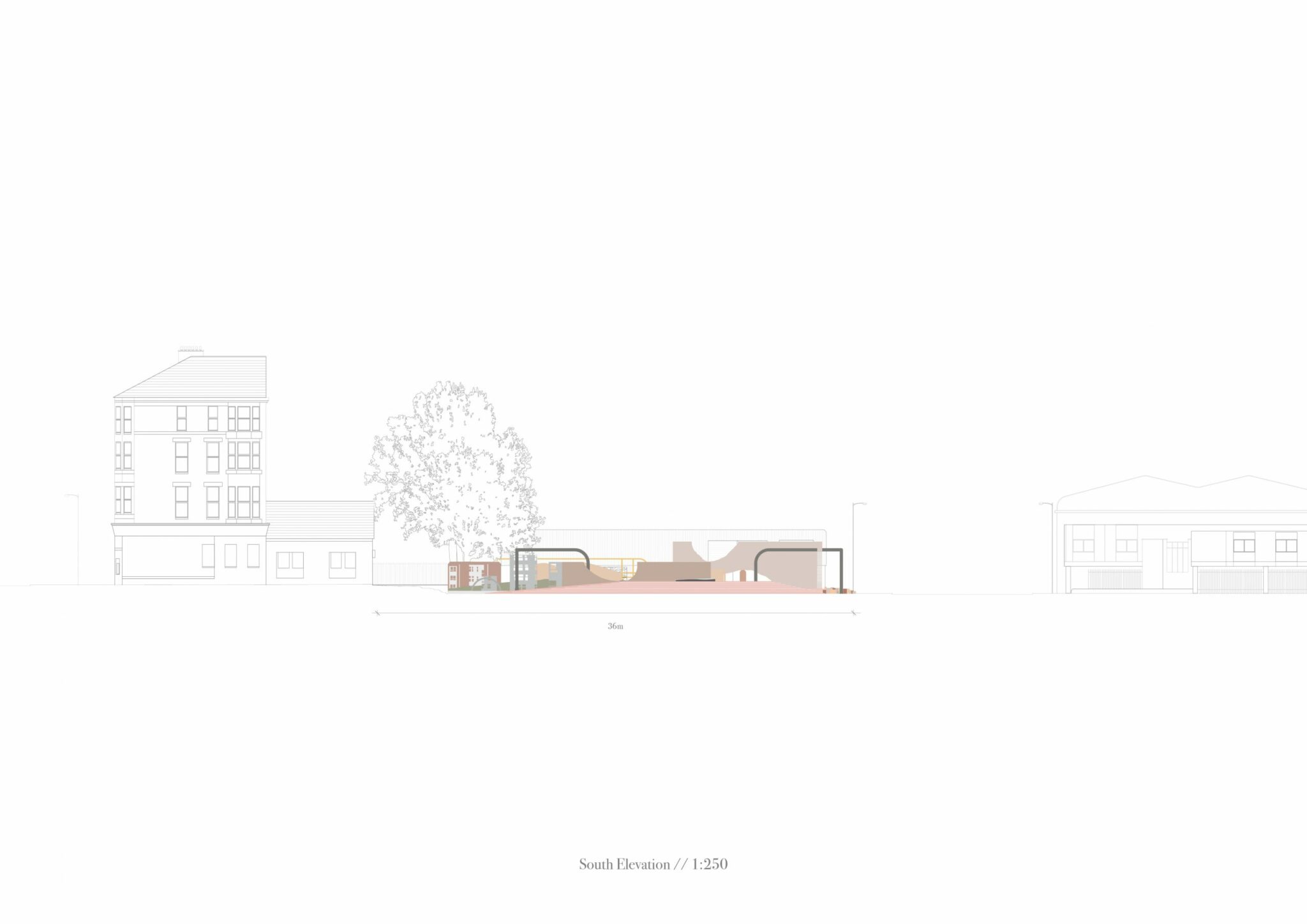 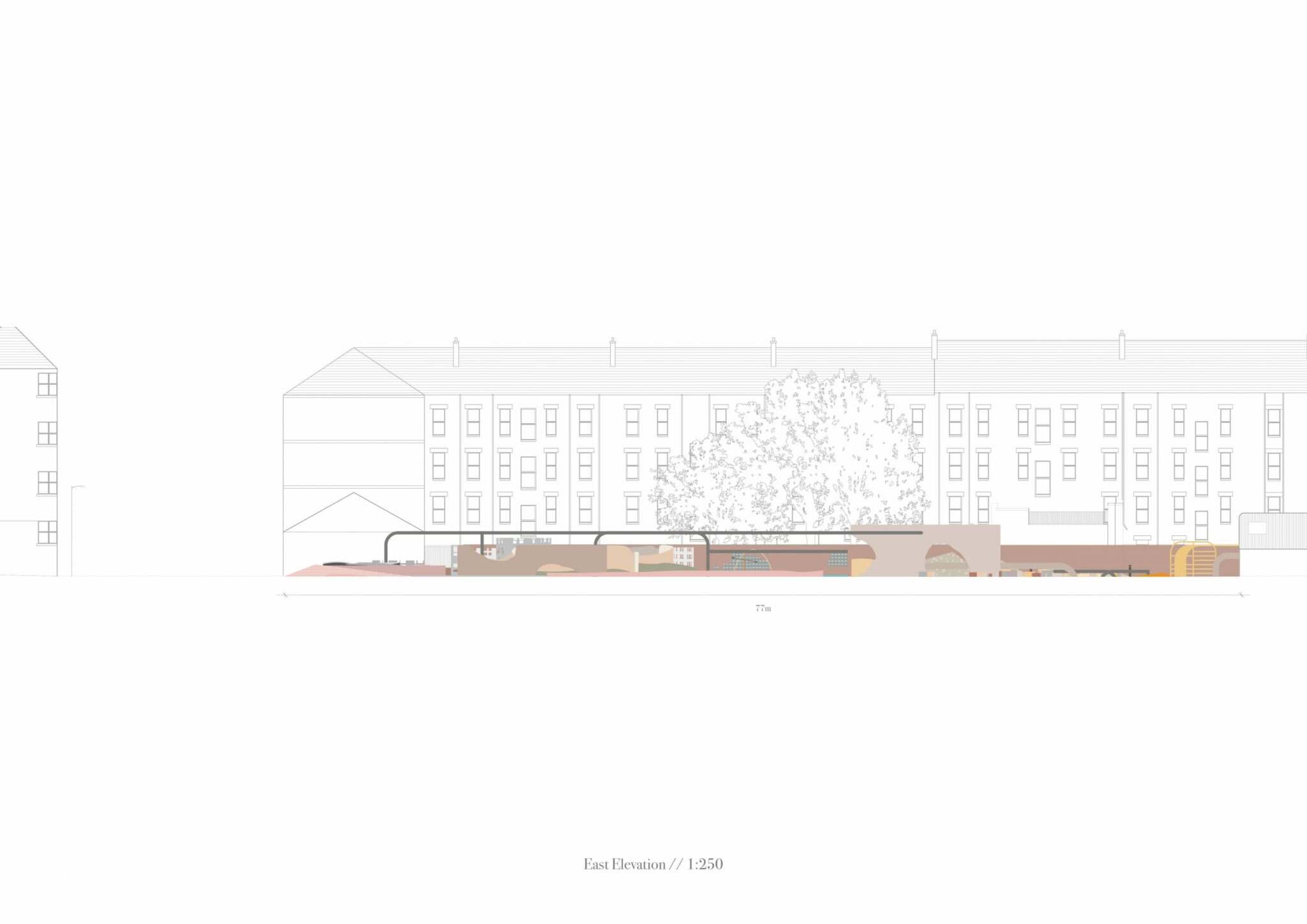 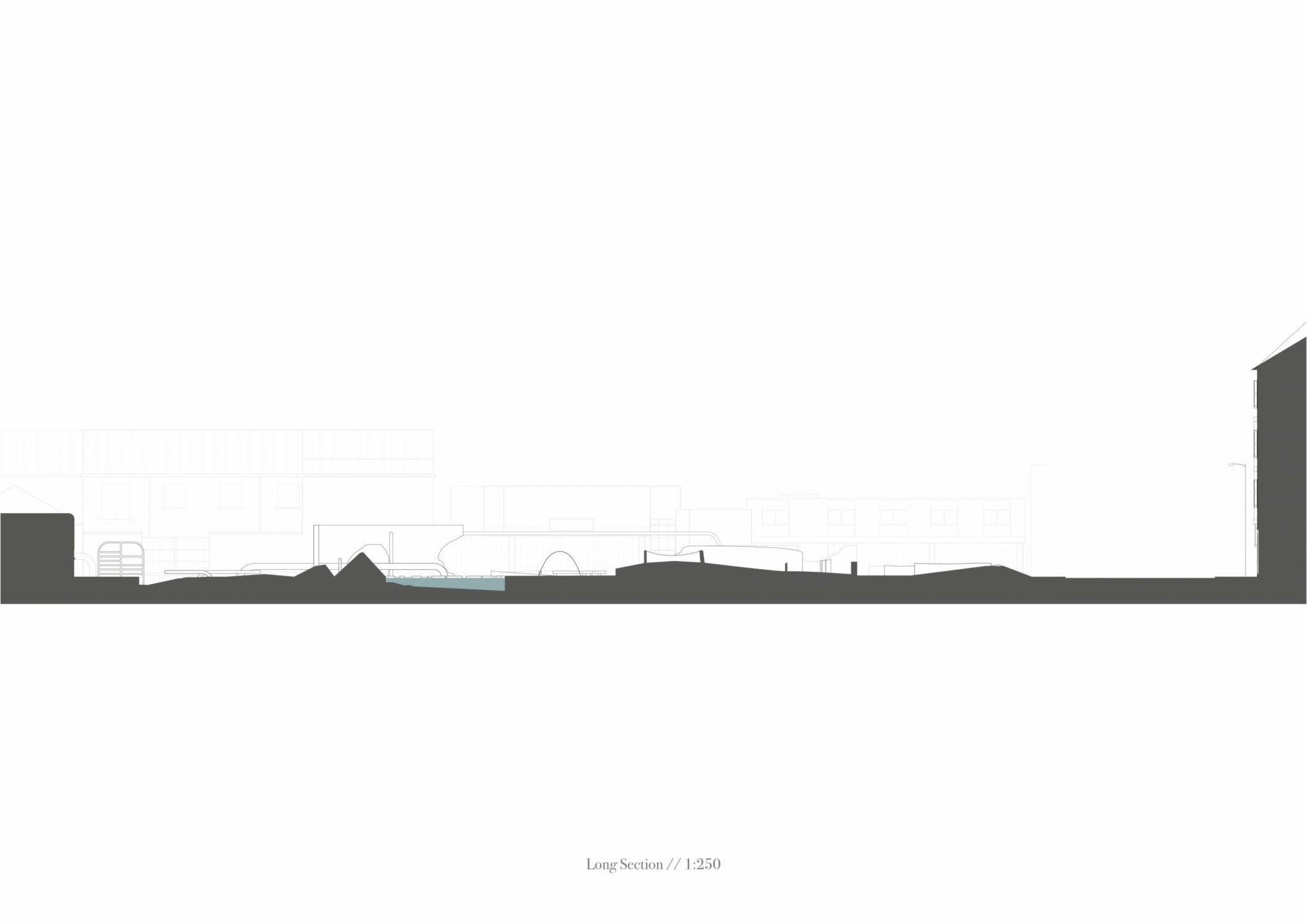 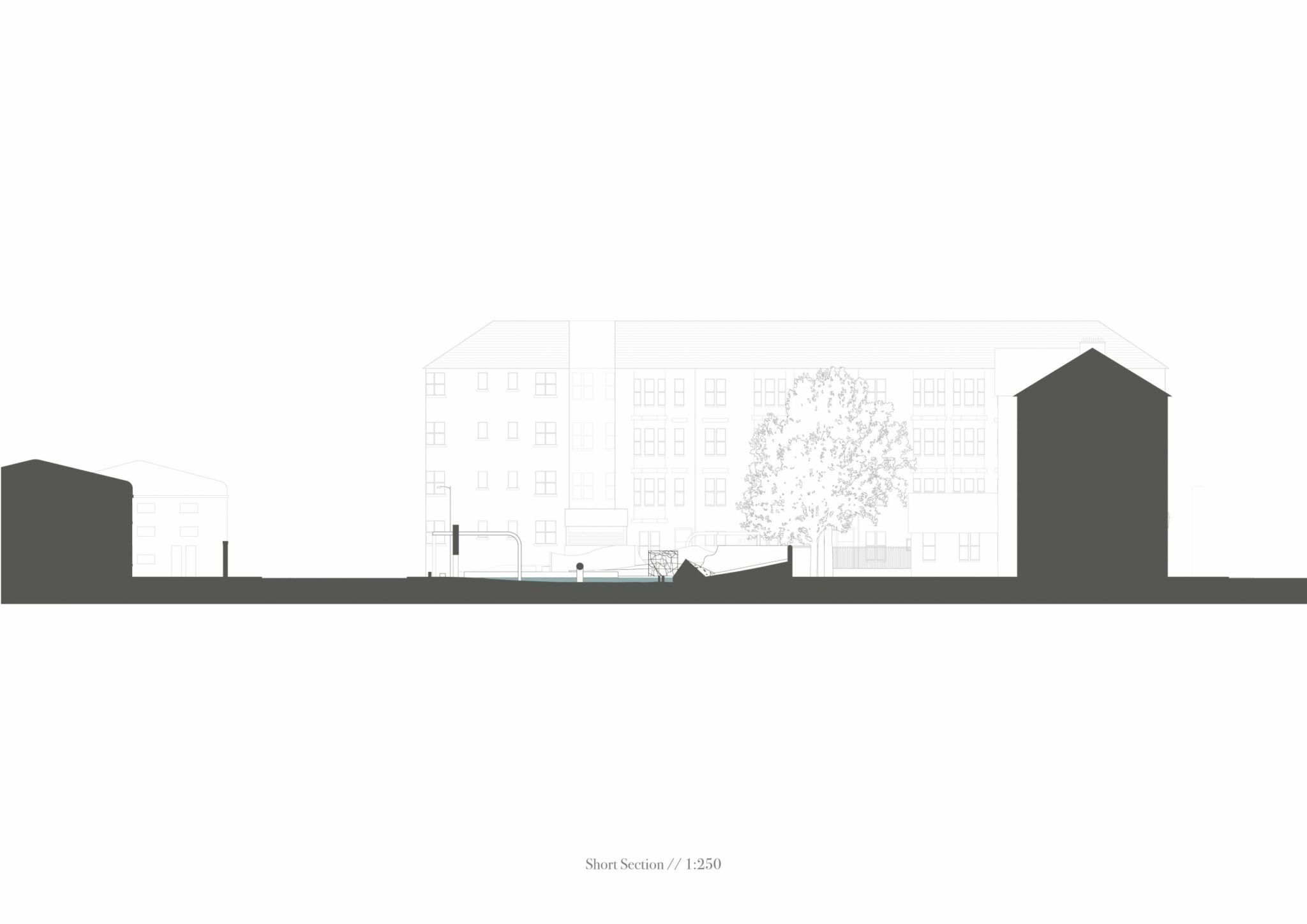